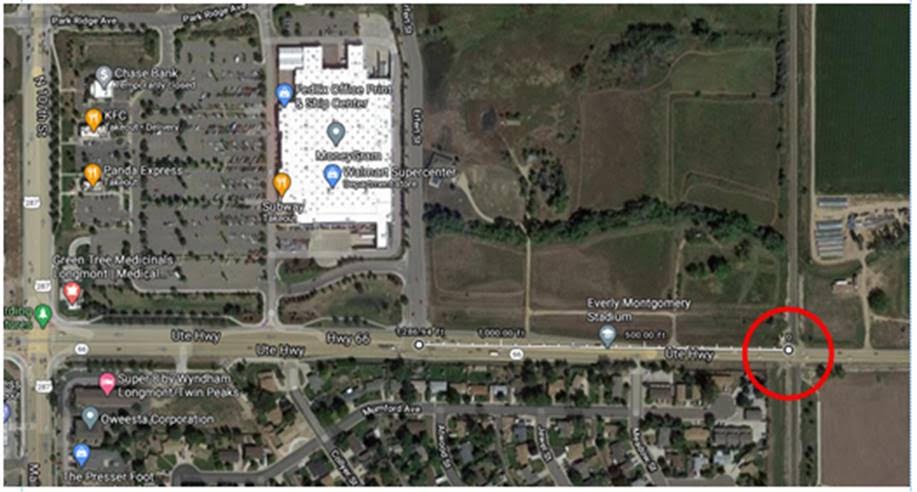 This photo shows a damaged section of railroad track that has forced the closure of Colo. 66 east of Walmart in Longmont. (Photo courtesy of Longmont Public Safety)

Update: As of 7:09 p.m. Wednesday, Deputy Chief Satur announced that repairs to the track on Colo. 66 were complete and the highway has been reopened.

Longmont police are advising motorists to steer clear of the railroad tracks on Colo. 66 just east of Walmart.

In an email sent shortly after 3 p.m. today, Jeff Satur, deputy chief of Longmont Police Services, advised that a closure of the highway is expected to last at least three hours but could go as late as 10 p.m.

A panel at the crossing that BNSF Railway replaced keeps coming loose and is being damaged by vehicles, Satur stated in the email.

“This is a BNSF repair issue,” Satur stated. “Today, (Longmont Public Works & Natural Resources) is helping with the emergency repair in hopes that it will be more permanent.”

This is the third time police have had to close the road because of damage at the railroad tracks, according to Satur.

The exact location of the damage is shown in the attached photo, but Satur stated it is about 1,280 feet east of Erfert St., north on Colo. 66.

Medical marijuana delivery to Longmont residents to include all state-licensed dispensaries
Sep 23, 2020 11:00 AM

Colorado dance legend to step into local spotlight Thursday
Sep 23, 2020 10:00 AM
Comments
We welcome your feedback and encourage you to share your thoughts. We ask that you be respectful of others and their points of view, refrain from personal attacks and stay on topic. To learn about our commenting policies and how we moderate, please read our Community Guidelines.