Inside the Ballot Box: A look at the measure to bring wolves back to the Western Slope

What is the Colorado Parks and Wildlife Commission?

The Parks and Wildlife Commission is a board of citizens appointed by the governor. It’s a diverse body of 11 voting members representing sportspersons, agriculture and conservationists. A minimum of four must reside west of the Continental Divide. The Commission sets plans, policies and regulations for the various wildlife management agencies of the Colorado government.

The mission of Colorado Parks and Wildlife, CPW, is “to perpetuate the wildlife resources of the state, to provide a quality state parks system, and to provide enjoyable and sustainable outdoor recreation opportunities that educate and inspire current and future generations to serve as active stewards of Colorado’s natural resources.”

Readers who are conservationists will think about how the similar “balancing”  mission of the Colorado Oil and Gas Conservation Commission, or COGCC, has worked. Consider whether this is why a ballot measure is required to get Parks and Wildlife to make a decision one way or the other on wolf reintroduction.

Before the colonization of the Americas by Europeans, the gray wolf ranged over what is now the entire continental United States and most of Canada and Mexico. Farmers and ranchers systematically exterminated them because they took livestock and were at least perceived as a danger to humans. Their range in the Continental U.S. was greatly reduced by the 1930s, and the last ones known in Colorado were killed by 1940.  Populations of elk, mule deer and coyotes began to increase. In some places, damage to woods and fragile wetlands resulted.

As awareness of conservation and species loss gained ascendancy, understanding that these majestic predators were a valuable part of our natural heritage increased. The gray wolf was classified as an endangered species in 1978. Reintroduction began in Idaho, Montana, and Yellowstone National Park in 1995-96. By 2009, wolves were delisted under the Endangered Species Act for these northern Rocky Mountain areas. Today, the Fish and Wildlife Service has proposed delisting gray wolves, saying that sufficient range has been established to eliminate any danger of extinction. It’s a subject occasioning fierce debate. Opponents say that wolves are still absent from too much of their original extent where suitable habitat remains.

With no apex predator other than human hunters in the picture, Colorado’s herds of elk and mule deer tend to overpopulate. Elk have increased their range all the way out onto the eastern plains in the north. Wildlife biologists believe the unnatural population density of these herd animals has led to the spread of chronic wasting disease, or CWD, in Colorado’s wild ungulate populations. Colorado Parks and Wildlife has a management plan for CWD, which admits the disease probably cannot be eradicated with management methods presently available. CWD is a prion disease, similar to mad cow disease. It is unknown whether CWD can be transmitted to humans from eating venison or the neural tissue of deer or elk.

The large and often underfed herds of deer and elk have been observed to do damage to riparian shrubbery and recovering forestland. Reports from Yellowstone state that the overall health of the ecosystem improved after wolves were introduced. 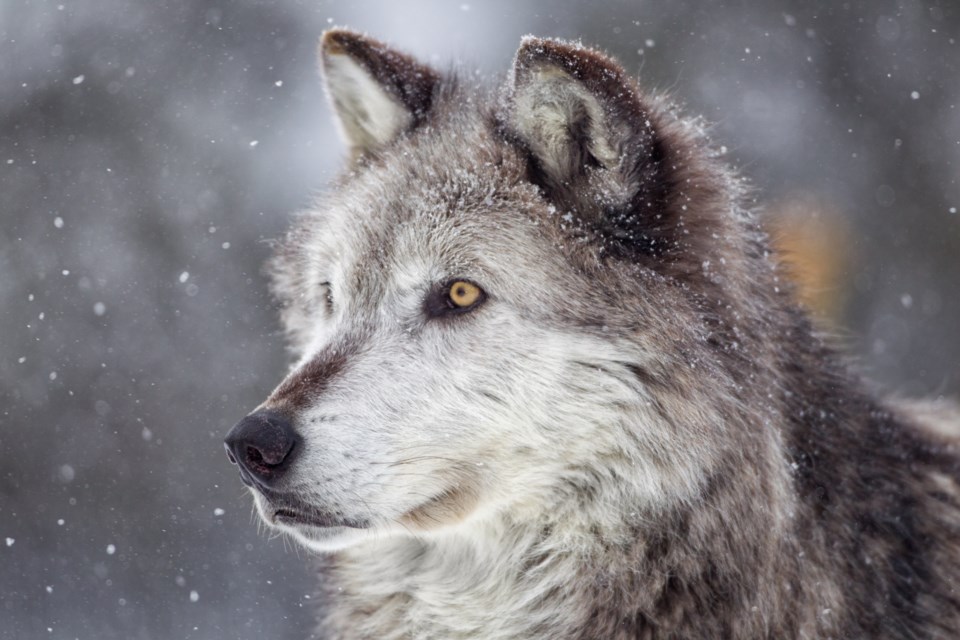 Proposition 107 would require the Parks and Wildlife Commission to create a plan to restore the gray wolf population on public lands in Colorado on the Western Slope only.  The plan is to be completed by the end of 2023. The proposal does not require a timeline for reintroduction, nor does it specify the number of animals to be introduced, nor what the target population and range should be. All this would be determined by the plan. In fact, since wolves bred from the population of 41 introduced in Yellowstone in 1995 have increased and are now migrating west and south through and across the Rockies, it may happen that no new individuals have to be “introduced” at all.

If passed, Prop 107 would create a fund for reimbursing farmers and ranchers for livestock lost to the apex predators. Nevertheless, there is a lively and emotional debate about wolf reintroduction in Colorado, with well-funded issue committees arguing both sides of the matter.

The arguments on the pro side appear to be more based in science than the arguments on the con side, which either rely on short-sighted economics or on fear. There is an extensive literature on livestock management in the presence of apex predators, which seems to indicate agriculture would not suffer extensive losses. The sporting argument seems to hold the least merit. How is it more sporting to hunt an overpopulated, under grazed and sick herd, than to hunt from a healthy and fit population whose density is appropriate for the land? Shouldn’t it require skill and effort to take a deer?

Finally, the Colorado Parks and Wildlife Commission may be suffering from mission paralysis. It could direct the state to reintroduce wolves, but will it? The COGCC could regulate emissions from oil and gas extraction, but has it? No. I think I’ll be voting for Proposition 107, to return these majestic beasts to the Western Slope and take one more step towards healing our natural environment.

The website ballotpedia.org has a particularly good report on Proposition 107, who is behind it, who is in opposition, and how much money they have. If you’re not sure, check it out.