Inside the Ballot Box: C is for charity

Constitutional Amendment C, which was referred to the ballot by the state Legislature, would change the age requirements for charities able to conduct charitable gaming and would allow them to pay those who help with such games.
Aug 31, 2020 3:11 PM By: Marcia Martin

In this age of mountain casino towns, legalized marijuana and the general rollback of regulations on “sin,” it may seem odd to find the Colorado Constitution regulates church raffles and bingo games at the Moose, Elks and Oddfellows lodges. But there it is. It does. Title 24, Part 6, “Bingo and Raffles Law” clearly distinguishes between licensed, for-profit gaming houses and charitable organizations, which includes churches and other houses of worship, and charitable clubs and lodges.

Inexplicably, these charities, under the present Constitution, can only conduct charitable gaming after they have operated as a charitable institution for five years. Additionally, the games must be conducted by unpaid volunteers, who may only be reimbursed for travel expenses, meals and the like.

If Amendment C passes (think C for charity) then the institutions sponsoring the games will need only be 3 years old, and they can pay their gaming workers — but only the state minimum wage.

A cute trick in the language of Amendment C is that after three years, the institutional age requirement expires, and charitable (but not for-profit) institutions will be free to conduct games and raffles to raise money for benevolent purposes no matter how young they are. Presumably, if there is a need to impose some new regulation of this sort, the sitting General Assembly will take care of the matter by statute.

Outgoing State Rep. Jonathan Singer introduced this legislative referral as HCR 20-1001. During his long tenure in the state House, Singer acquired a reputation for finding gaps and tears in Colorado law and patching them up. (Singer was originally appointed to finish out a term, then was elected four times, the limit for consecutive terms.) Amendment C is no exception. Raffles and bingo are important fundraising tools for nonprofit organizations, and it can be a hardship that young organizations can’t use them. Singer said his original intent was to eliminate the waiting period, but believe it or not, there’s a commercial bingo lobby. Three years, down from five, was a compromise in the required waiting period, needed to obtain the two-thirds majority for referral. 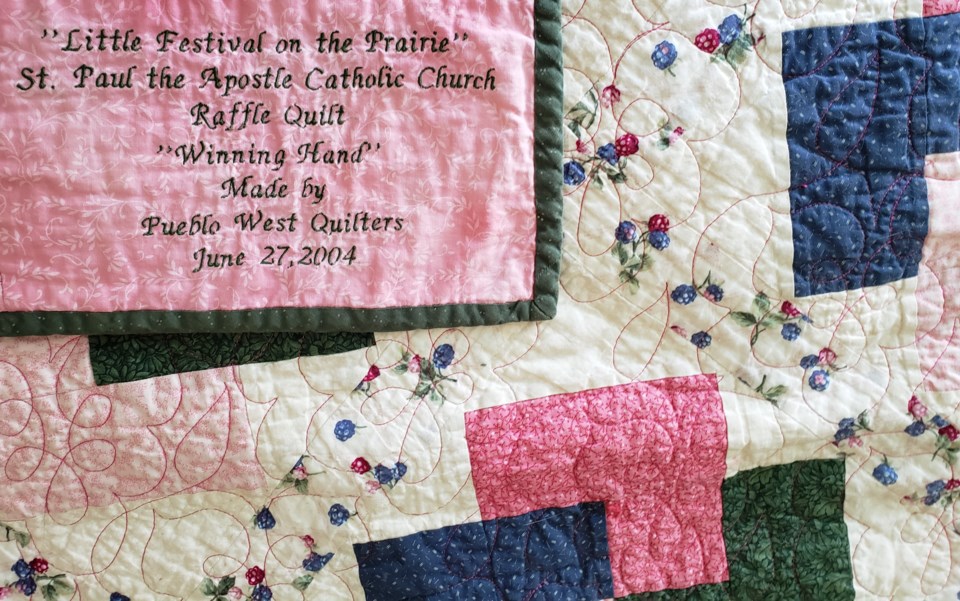 Amendment C on the Nov. 3, 2020 ballot would change some of the rules governing charitable organizations' raffles, such as one in which this quilt was a prize, and bingo games. (Photo by Marcia Martin)

These are the arguments the state plans to publish in its ballot information booklet, also known as the Blue Book.

Con: Professionalizing bingo-raffle operations undermines their charitable fundraising purpose. Paying workers increases overhead to operate games, potentially reducing the amount of money nonprofit organizations are able to raise and dedicate to their core mission. By removing the requirement that workers be volunteers and expanding the number of nonprofits that participate, bingo-raffle games become more like for-profit gambling than charitable fundraising.

I think everyone should vote yes on Amendment C. C for charity, C for Colorado. As constrained as Colorado is in providing governmental services for the needy, for education and for other good purposes, our nonprofits need all the help they can get. Bingo and raffles are harmless fun that shakes loose discretionary income from residents, when it might otherwise be spent on fast food and plastic stuff. I am for it.

Interestingly, it’s projected to cost the state more to process the extra bingo licenses than the license fees will bring in. I don’t consider this an excuse for voting no, though. The state should streamline the licensing process, instead. Lighten up, Colorado.