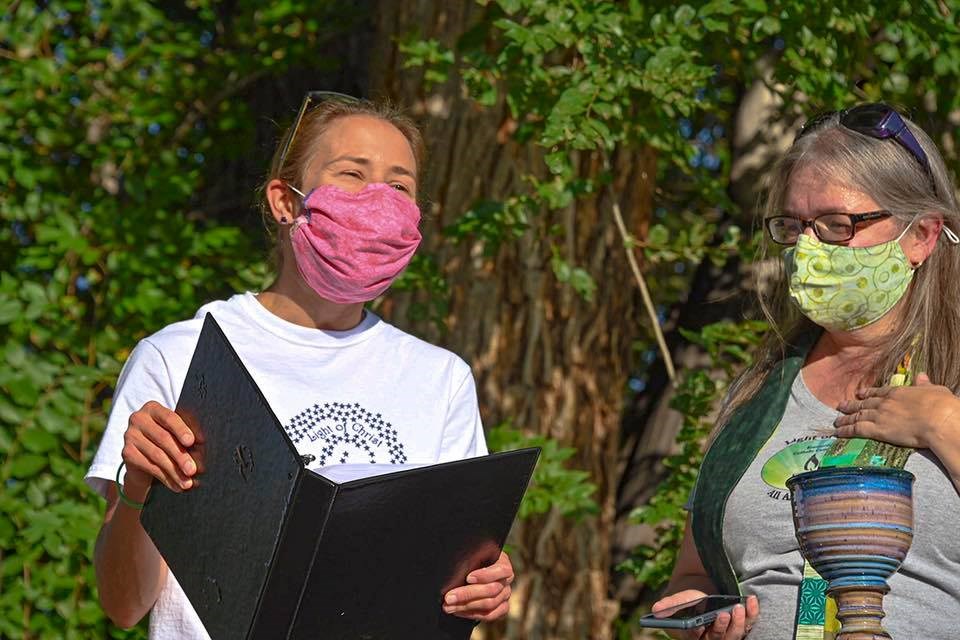 Poetry has found a place in faith at Light of Christ Ecumenical Catholic Community.

In a tribute to the poetic talents of the Rev. Teri Harroun and in an effort to share a bit of joy with her, the congregation in August bestowed the title of poet laureate to Harroun.

The community at Life of Christ follows Harroun’s poetry blog, where she posts several of her poems, said congregation member Margo Tiller. Harroun also shares many of her poems on Facebook. 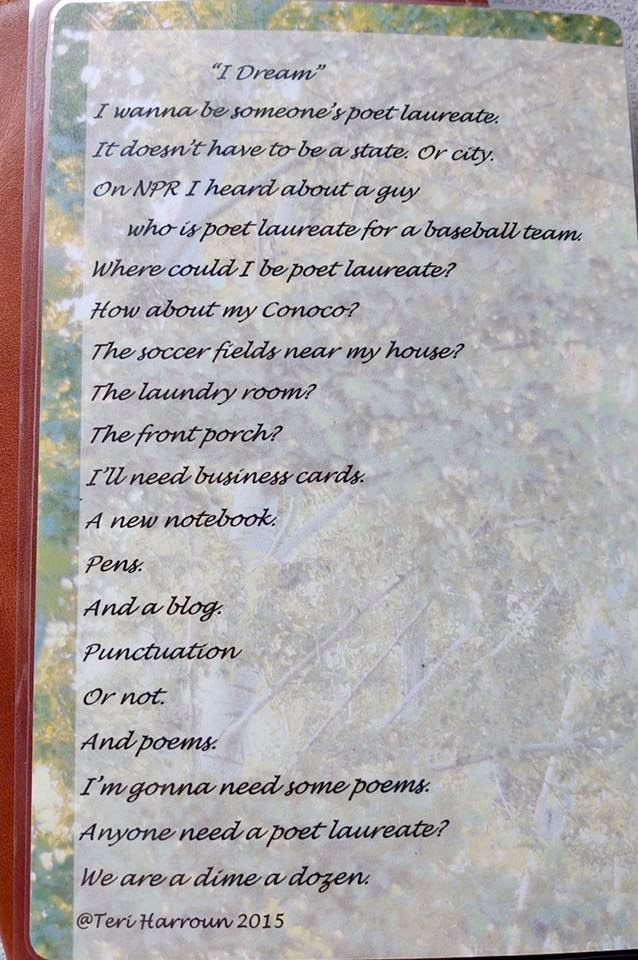 Recently, Facebook reminded Harroun she had shared “I Dream” in the past. She thought it was a fun poem and shared it again with her new congregation. The poem speaks of Harroun’s dream of becoming a poet laureate anywhere that will accept her, including someone’s laundry room.

Amused by this and wanting to share a little joy with their priest, Tiller and others in the Light of Christ community decided to make Harroun’s dream a reality and presented her with the poet laureate title.

“Why wouldn’t we want her as our poet laureate? She has a big following and with the pandemic we thought it might be the right timing for her to have some fun,” Tiller said. “I told the (church) council we should do it before somebody else grabbed her.”

The council put together the presentation on Aug. 30 during the Light of Christ’s first Parking Lot Liturgy. Harroun said she was so focused on the logistics of the first service in the parking lot that she had no idea what her congregation was up to. 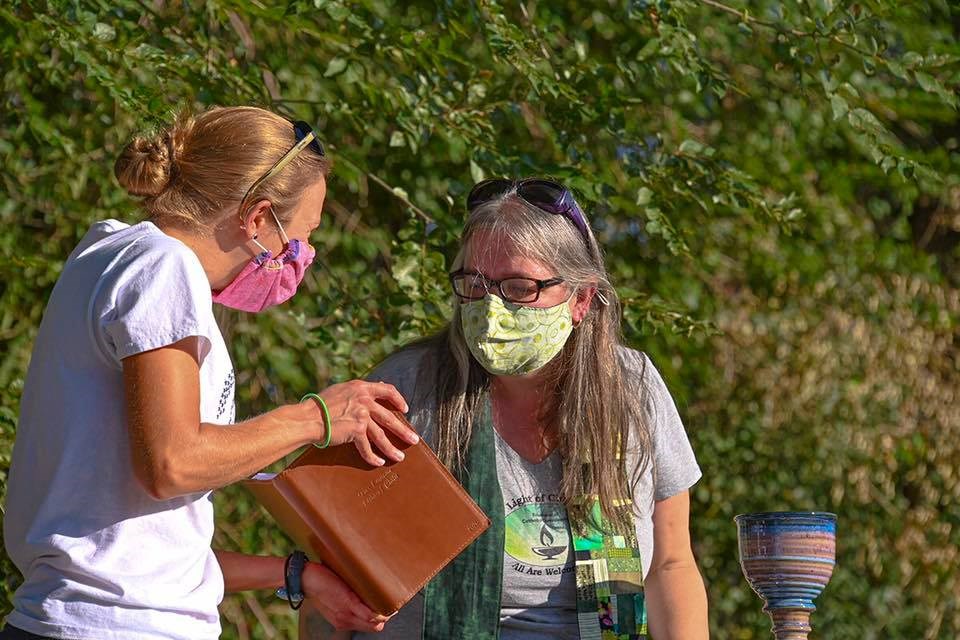 The congregation presented Harroun with a certificate, naming her the church’s poet laureate, and a leather bound journal. “It was kinda cool,” Harroun said.

Light of Christ Ecumenical Community identifies as following the Catholic faith but is not a part of the Roman Catholic Church.

“We choose to remain Catholic yet find ways to honor and recognize the talents and gifts of each and every person in the community. We are building a community that worships together, plays and laughs together and showers kindness on each other. We are not building alone and we are not building outside the Catholic tradition,” according to the Life of Christ website.

“We have a Catholic experience of God, so all the smells and bells that you think of with the sacraments, especially Communion, but we come from this place of radical inclusion. We really break open those sacraments so that they are available and accessible and offered to everybody who wants to participate,” Harroun said. “If you came to Mass, if you grew up Roman Catholic, it would look very similar to what you experienced.”

The website states, "Light of Christ is a community where all are accepted, valued and treasured for who they are and the gifts they bring.” This includes welcoming people from the LGBTQ community, divorced individuals and even allowing women into the ministry.

Harroun said she was called by the community instead of being assigned, which means the Light of Christ selected her from a pool of applicants. She kept the title father because her children asked to be the only ones to call her mother. Other women priests in the Ecumenical Church community use the title mother.

“They said, ‘Mom, can we be the only people who call you mother? We feel like we sort of have to give up a part of you so that you can do this and we want to support you and what you do. We really think that you’re supposed to be doing this but we don’t want everybody to be calling you mother,’” Harroun said.

She kept the title father since it is the title other Catholic priests use, making her the only female in the Ecumenical Catholic Church, or ECC, who uses the title, Harroun said.

Harroun grew up Roman Catholic and eventually found the ECC more to her liking because she didn’t feel pressured into only having one way to have a relationship with God.

“To be ecumenical is to be willing to work with other Christian denominations and people to do the work of God,” Harroun said.

Light of Christ shares the Bethlehem Lutheran Church building and coordinates with it on mission trips and team projects. The two churches also conduct services together, Harroun said.

“We sort of lift up where we can be in unity together while acknowledging our diversity and we believe that just brings more of the image of God into the world, not less,” Harroun said.

Harroun said she began writing poetry “as an angsty teenager as an outlet to explore feelings.” While not all of her poetry concentrates on her faith, she feels that much of it has an underlying spirituality to it. She has written a book, “A Woman Called Father: Reflections on a Priesthood in a Woman’s Body,” a collection of poems about her experience in priesthood that can be found on Amazon.

Harroun said that her favorite poem from the book is called “Pink Bandana” because “it captures for me part of the essence of what we are trying to do in the ECC. It is sort of in this soft but real-lived experience way of who we are. This is who we want to be in the world. We want to be present so people know God is present.”

Goblins and ghouls digitally haunt this year's library costume parade
Oct 23, 2020 9:00 AM
Comments
We welcome your feedback and encourage you to share your thoughts. We ask that you be respectful of others and their points of view, refrain from personal attacks and stay on topic. To learn about our commenting policies and how we moderate, please read our Community Guidelines.