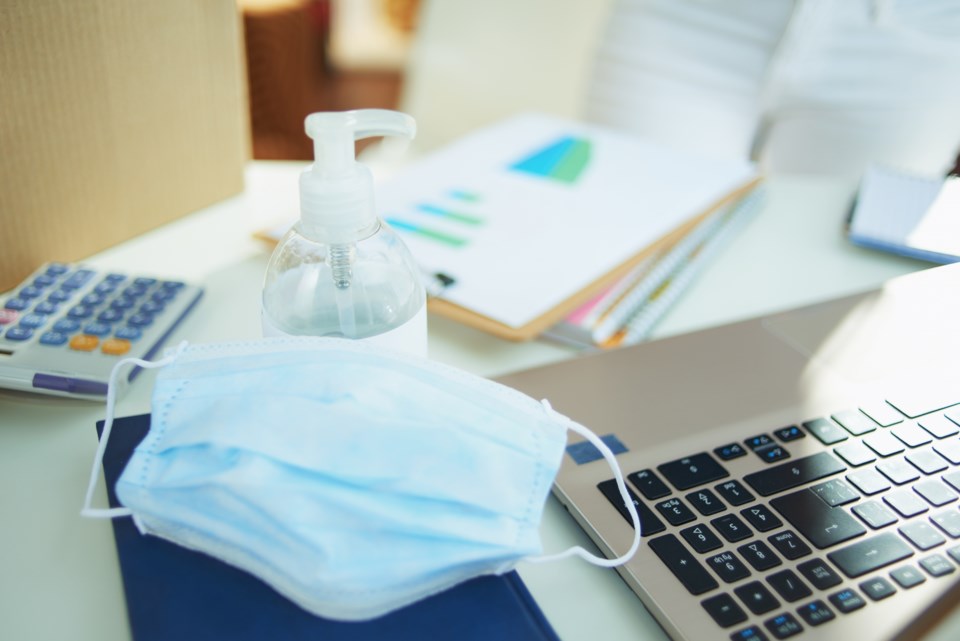 Closeup on medical mask and hand disinfectant on the table in temporary home office during the coronavirus epidemic in the living room in sunny day.Getty Images

Boulder County remains in the yellow level on the statewide COVID-19. This week Boulder County Public Health, or BCPH, shared both positive and negative news about the number of cases in the county.

While the county has remained steady in its place on the dial, the number of COVID-19 cases is on the rise. Two weeks ago, BCPH recorded 109 cases out of 100,000. Last week that number grew to 132, followed by 172.7 this week, said Lexi Nolan, deputy director and acting executive director of BCPH.

The positivity level for the county has once again topped the 5% that official target, now sitting at 5.3%. Two weeks ago this number hovered at 3.6%, according to BCPH data.

Data from the county has seen a rise in average cases per day, reaching 82. This number has been on the rise since early March, Nolan said.

Since students have returned to school the number of cases in residents below the age of 17 has increased significantly, Nolan reported.

The chart below shows the number of cases broken into age groups below age 17. 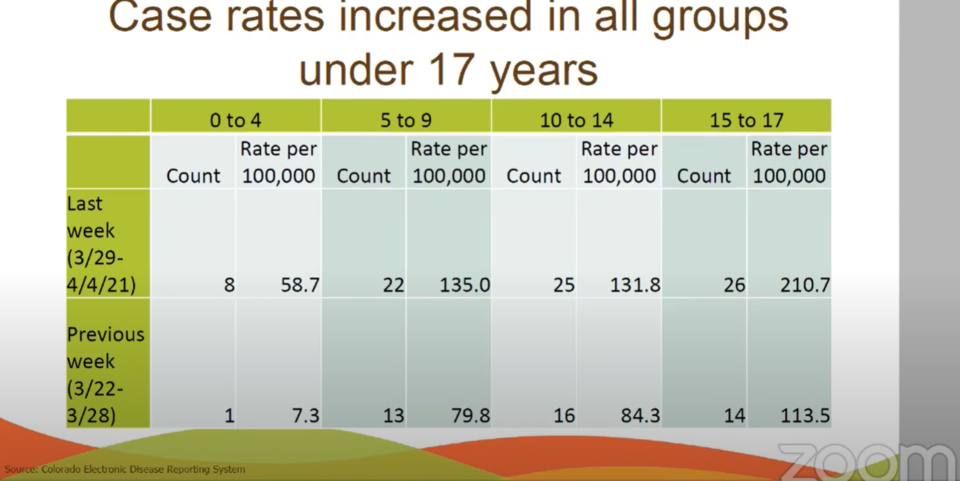 Screenshot from BCPH meeting on April 7, 2021

“This is not particularly unexpected. We knew there was a trade-off between being in school and keeping our cases low. What we do want to do is keep an eye on these trends,” Nolan said.

Nolan encouraged parents to not send children to school when sick and to continue wearing masks.

The good news for the county is hospitalizations have stayed the same with 11 consecutive days of decreasing or stable admissions, according to BCHP data.

Additionally, while case numbers are increasing in other age groups the “older and more vulnerable” groups — who have been the most vaccinated — have had the least amount of increase, Nolan said.

The best news of all is that the county has not recorded a single COVID-19 related death since early March, Nolan said.

In Boulder County, a total of 127,192 people have received at least one dose of the vaccine. The county continues to see an increase in the number of vaccines available averaging 3,500 per day up to 24,500 each week.

As long as the vaccine distribution numbers remain consistent, BCPH estimates all Boulder County residents will receive a vaccine by early June, with 70% being vaccinated within the first two weeks of May, said Chris Campbell, BCPH emergency manager.

“It is an ambitious goal and one we think we can meet,” Campbell said.

How worried should you be about coronavirus variants? A virologist explains his concerns
Apr 8, 2021 4:00 PM