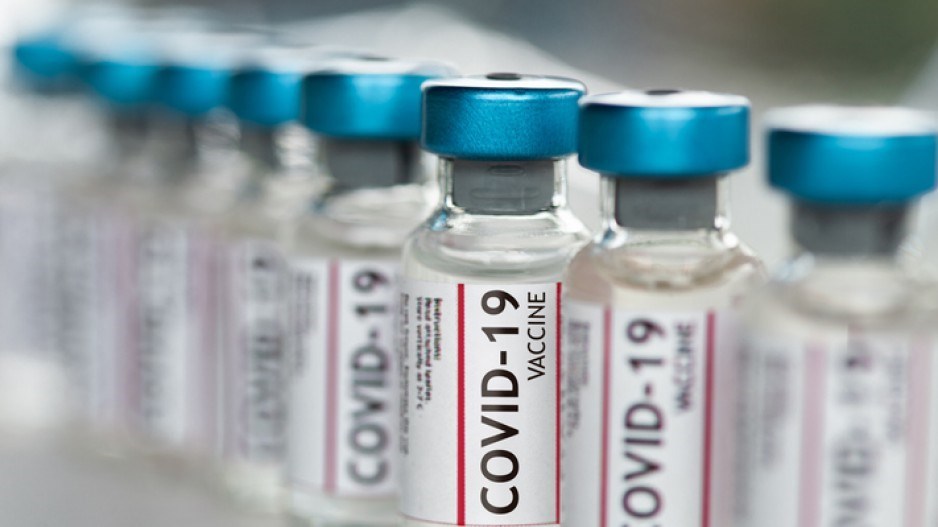 State lawmakers, a group of 100 people including everyone from millennials to baby boomers, could receive the COVID-19 vaccine ahead of some members of another high-priority group: adults 70 and older.

Colorado legislators and nonpartisan staff will be able to schedule vaccination appointments with UCHealth, which is currently administering two COVID-19 vaccines — one developed by Pfizer and BioNTech, and another by Moderna — as early as this week, according to Jarrett Freedman, a spokesperson for House Democrats.

Meanwhile, many Coloradans in the 70-and-up age group might not receive their first vaccine dose until weeks later. Gov. Jared Polis has said the state’s goal is to finish vaccinating at least 70% of the people in that group by the end of February.

“There are 100 legislators. There are a whole lot of people in Colorado that are over 70,” Senate Majority Leader Steve Fenberg, a Democrat from Boulder, said during a virtual news conference. “I don’t think we’re jumping the line. … By no means are we taking vaccines away from others that absolutely need it more than us, but I also think it’s important for the continuation of our state government that the Legislature is able to meet as the Constitution requires.

“And, you know, a lot of the work that we are going to do this year — that we have been doing — is really about providing relief and providing support for those families that are hurting right now,” Fenberg added.

By “jumping the line,” Fenberg referred to the dotted line state health officials have used to delineate the order of prioritization for two lists of groups in phase 1B of Colorado’s vaccination plan. 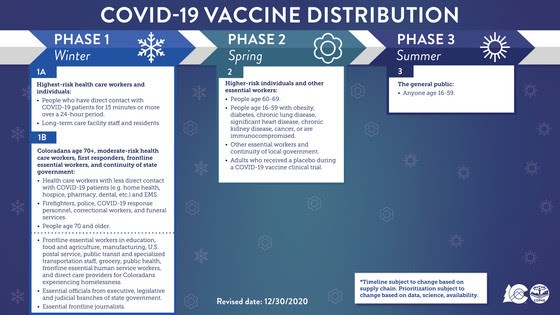 Many people included in phase 1A of the vaccination plan have already received their first dose of either the Pfizer or Moderna vaccine, and 35,700 Coloradans had received both doses as of Monday. Phase 1A includes health workers who treat COVID-19 patients, who received vaccine doses from their employers or local public health agencies, and long-term care facility staff and residents, who are getting their shots from the federal government’s Pharmacy Partnership for Long-Term Care Program.

Colorado recently started administering vaccine to people in phase 1B of its plan, which was expanded to encompass people 70 and older, moderate-risk health care workers, first responders, front-line workers and government officials.

Phase 1B represents a large swath of the state’s population, but the Colorado Department of Health and Environment clarified Jan. 5 that the following 1B groups (above the dotted line in the image above) would be vaccinated first:

Following those groups, CDPHE said, the rest of the people in phase 1B (under the dotted line) would be able to get vaccine doses. They include:

However, Colorado lawmakers appear poised to get the vaccine before many people in those groups designated as higher priority in phase 1B.

In particular, older seniors and their family members have expressed frustration at a lack of access to the vaccine, despite being prioritized in phase 1B. Early on monday, the Pueblo Department of Public Health and Environment announced on Facebook that people 70 and older could get vaccinated at a drive-thru clinic, scheduled for 9 a.m. to 5 p.m. or whenever supplies ran out. But before 9 a.m. the same day, the department followed up with a second post to say health officials “met our quota today” and no more vaccine was available — presumably due to the number of people lined up in vehicles before the clinic had opened.

“Do not attempt to go to the clinic at this time, avoid the area due to heavy traffic,” it added.

“Such poor planning,” one Facebook commenter said. “We were in line since 6:50 am and were told to leave. Maybe have multiple sites next time because this was a total mess!”

“You guys better get this more organized,” another person wrote. “That is terrible. My parents were there almost 2 hours early and were turned away.”

The Pueblo health department encouraged residents to sign up online to be notified about future vaccination clinics for people 70 and older.

Colorado lawmakers won’t be required to get the vaccine, and leadership won’t know who has received it, legislative leaders said at the news conference. But some have expressed their intention to get vaccinated as soon as possible.

“As an essential government employee, I will be eligible to receive the vaccine,” Rep. Shannon Bird, D-Westminster, said in a Monday newsletter to constituents. “By receiving it, along with my colleagues, we will be able to more safely gather for the 73rd Session of the General Assembly and continue working to provide relief to every Coloradan facing hardships brought on by this pandemic.”

Others, including Senate President Leroy Garcia, D-Pueblo, and Rep. Kyle Mullica, D-Northglenn, have already been vaccinated. Garcia received priority as a first responder, and Mullica as a nurse.

Freedman said he wasn’t sure on the exact timing of lawmaker vaccination, but believed some legislators would be able to schedule their first doses with UCHealth between Thursday and Saturday. The Pfizer and Moderna vaccines each require two doses, which are scheduled either three or four weeks apart.

The Colorado General Assembly will convene for three days starting on Wednesday to pass urgent priorities, and then recess until Feb. 16, when the regular session will begin.

“For those who are going to take advantage of the availability of the vaccine, we hope and expect that they will have both shots by the time we come back: Feb. 16,” Fenberg said.