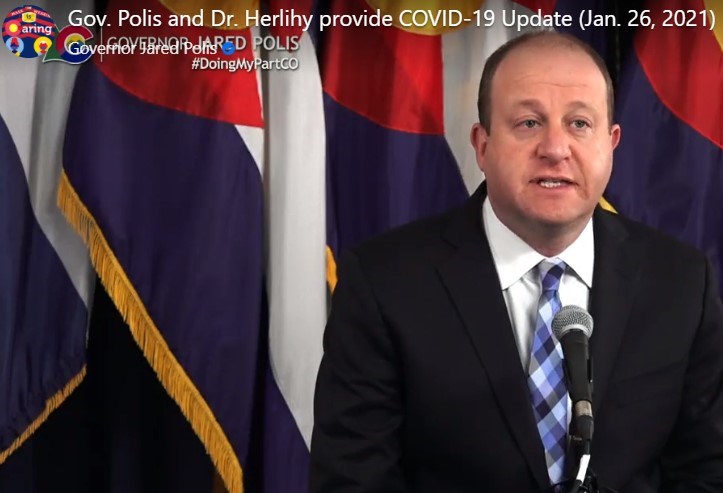 As COVID-19 vaccine shipments continue to trickle into Colorado, state officials on Tuesday stressed that measures like social distancing and mask-wearing will remain the best tools available to fight the pandemic for months to come.

“If people get a little bit more lax, it will resurge before the vaccine has time to kick in,” Gov. Jared Polis said during a news conference on the state’s coronavirus response. “Vaccine (distribution) is rapidly happening, but currently there’s a lot of danger in people socializing or getting together or not wearing masks.”

That will likely remain true for much of the first half of 2021, according to public health modeling presented by state epidemiologist Dr. Rachel Herlihy. The modeling shows that current “transmission control” measures like social distancing and masks — not vaccines — will make the largest impact on the number of hospitalizations and deaths caused by the coronavirus in Colorado over the next four months.

At the state’s current level of transmission, an estimated 700 more Coloradans could die from COVID-19 before June 1, with effective vaccine distribution potentially reducing that number to around 500, according to a chart Herlihy presented Tuesday. But if Colorado’s transmission control level drops significantly, that number could climb into the thousands — regardless of how many Coloradans get vaccinated.

“We really don’t see the full effect or benefit of the vaccine for many months to come,” Herlihy said. “And so during this time, all of the strategies we have in place continue to be important.”

As of Monday, Colorado providers have administered more than 458,000 first doses of the COVID-19 vaccine, Polis said, and roughly 82,000 people have received their second doses, which are recommended to be administered three to four weeks after the first. While the state has stopped holding some second doses in reserve in an effort to speed up vaccinations, Polis said Tuesday that the supply has been stable enough that second doses have remained on schedule.

Polis again urged drugmakers and the federal government to speed up production and shipments to Colorado and other states, saying that providers have the capacity to vaccinate up to five times as many people as they currently are. The number of doses received by the state each week has remained relatively flat since the first shipments began arriving last month, with the next weekly allocation expected to contain just over 80,000 doses.

“At those levels, it will take an awfully long time until we achieve the level of immunity where the pandemic is over,” Polis said.

With many of its highest-priority, front-line health care workers now having received the vaccine, Colorado has entered what state health officials call “Phase 1B” of its vaccine rollout plan.

The state is “laser-focused,” Polis said, on getting vaccines into the arms of Coloradans age 70 or older. He pointed to a paper published in September by researchers at the University of Colorado Boulder, which concluded that a vaccine rollout that prioritized older adults was by far the most effective strategy to minimize COVID-19 mortality.

“We want to make sure all of our partners across the state focus on that group,” Polis said. “Everybody over 70 will be able to get (vaccinated) in the next few weeks.”

Phase 1B will continue with many essential workers, including teachers, receiving the vaccine next, with Polis expressing his hope that many school employees can receive their first doses before March 1. Coloradans under 70 who are immunocompromised or have other preexisting conditions, and who aren’t in a higher-priority category, will have to wait until phase 2 begins later this spring, a decision that Polis said is supported by epidemiological data.

“Age itself is the single largest risk factor,” Polis said. “It’s a more risky virus, in terms of hospitalization and death, for a perfectly health 82-year-old than it is for a 20-, 30- or 40-year-old with a preexisting condition.”

More than 5,500 Coloradans have died after testing positive for COVID-19 since Colorado confirmed its first case last March, according to the latest data from the Colorado Department of Public Health and Environment. Officials estimate that about 1 out of every 115 Coloradans is currently contagious with the virus.

Case rates have fallen off since a dramatic spike in November and December threatened to overwhelm Colorado hospitals and led officials to implement a spate of new shutdown measures. Colorado is currently faring better than many other states, Herlihy noted, with the 11th-lowest number of cases per capita in the country over the last week, according to CDC data.

“The way we’ve been living the last month has worked,” Polis said. “It’s put a downward trajectory on the virus. If we can keep this up for a couple more months, we can minimize loss, get back to normal sooner rather than later, and give the vaccine a chance to catch on.”

SVVSD expects staff COVID vaccinations to be complete by spring break, after which students will return to school four days a week
Feb 25, 2021 8:00 AM