Record number of people have signed up with the Colorado Secretary of State's Office to work the polls and hundreds are filling roles in Boulder and Weld counties.
Oct 4, 2020 9:00 AM By: Julie Baxter 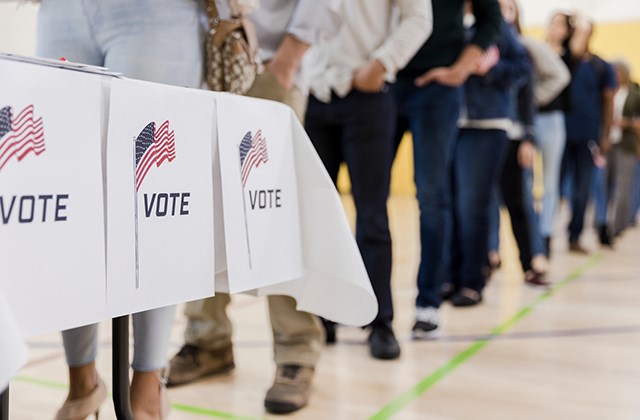 With mail-in and early voting, Election Day in Colorado is really election season, and preparing for it is a marathon, not a sprint.

Key to the efforts of county clerks is ensuring there are enough “volunteer” workers to man voter service and polling centers that will open on Oct. 19.

The need for such volunteers, who are actually paid temporary workers, has been in the national spotlight of late because of the coronavirus pandemic. Traditionally poll workers are older adults who might be more at risk of COVID infection and could be reluctant to fill such roles this year.

Locally and statewide, however, the virus doesn’t seem to be keeping volunteers from stepping up.

In Weld County, Clerk and Recorder Carly Koppes has already crossed her poll worker finish line. She has filled all of her 300 to 400 positions for election judges, who will earn $15.20 an hour, or $17 an hour if they are supervisors, for their duties at 14 county voter service and polling centers.

“We are very blessed in Weld County and have a lot of veteran judges coming back,” Koppes said.

Election judges’ ages average anywhere from 60 to 80, she said.

Koppes’ Boulder County counterpart, Molly Fitzpatrick, still has a bit of ground to cover to fill 650 positions at 20 polling places. Particularly needed are Republicans to serve as election workers and judges for pay of $17.42 or $18.42 an hour depending on the role, she said.

Also particularly needed are workers for the voter service and polling center at the University of Colorado Boulder, which is Boulder County’s largest polling place but has been in the news lately because of the coronavirus outbreak on campus.

Boulder County also is bringing more young adults into the election worker fold. While not created in response to the pandemic, Boulder County has started a Student Democracy Program to recruit, hire and train high school students ages 16 and 17 and has hired 30 for this election, Fitzpatrick said.

Election worker duties include, but aren’t limited to, greeting voters at the door, registering voters or checking registration, verifying signatures, and adjudicating ballots, which involves a bipartisan team of judges looking over ballots with errant or unclear marks to determine voter intent.

All election workers receive hours of training, as much as two days’ worth depending on the role they fill, and there is plenty of on the job support, Fitzpatrick said. “We’re always doing training when they’re on shift. It’s not like we train them and set them free.”

Both clerks are staffing the polls at higher levels than average in a nod to the turnout expected in this presidential election year. And both also are making contingency plans for backup workers should they be needed.

To register to vote, check or update your registration, click here. (Note: The site will be down from 5 p.m. Sunday through 8 a.m. Monday for maintenance.)

To learn more about or to apply to be a Boulder County election worker, click here.

In Boulder County, Fitzpatrick said the number of voter service and polling centers was increased from 19 to 20 in that same spirit — “adding that layer of contingency in case something were to happen.”

“Something” could include an outbreak at a polling center, she said, and the Boulder County Elections Division has people on standby so they can be activated immediately, Fitzpatrick said.

Contingency isn’t the only “c” word on the clerks’ minds this year, either. Cleaning is a vocabulary constant, too, as is caution.

A number of coronavirus-related safety protocols will be in place at voter service and polling centers in both counties, such as social distancing, glove and mask wearing, hand washing and sanitizing, and plexiglass dividers where possible. And election workers’ and judges’ duties are expanded to include cleaning, which Koppes said might require a bit of extra patience from visitors as it will take a bit of extra time to complete after each voter.

“Every voter will have a personal stalker that is going to be cleaning,” she joked. “We’re just being cautious.”

Koppes and Fitzpatrick both urged voters to take advantage of the ballots mailed to them and to return them by mail or at 24-hour drop boxes.

“My first plea is for everyone to go to govotecolo.gov, to check their registration,” Fitzpatrick said. She urged them to do so sooner rather than later because the sooner they do, the sooner they will receive a ballot in the mail. Ballots are slated to start going out on Oct. 9.

And she urged those who have their minds made up to return their ballots as early as possible. “It helps to have a longer time to process ballots rather than just election night,” she said.

Both clerks, however, are preparing for a large number of in-person voters this year, since the security of voting by mail also has been the topic of federal-level scrutiny and doubt.

The last couple of elections, less than 5% of Weld County voters cast their ballots in person, said Koppes, adding she hopes that continues this year. But she knows more people might choose to vote at polling locations.

“We understand there is a lot of noise out there that might push people to vote in person,” she said. “We’re doing our normal thing. Honestly, it hasn’t been too much of an adjustment even with COVID, we always plan for high turnout.”

Among those who will be staffing a polling place in Boulder County is retired dental hygienist Karen Gross, who will be working her second presidential election. Her first was in 2016.

“I thought this something I would like to do because I wanted to know more about how the process worked. It was a very special election in my mind,” she said. “I was an adjudication judge. We were sort of the last line in a series of steps where the ballot is kicked out because something has gone wrong with it for various reasons.”

She also has worked a midterm election as a signature verification judge and said she was impressed with the process that involved not only her, a registered Democrat, but a Republican counterpart.

Such Democrat-Republican teams also include a third, unaffiliated member who looks at a computer screen as the election workers look at ballots, Fitzpatrick said.

An environment with workers from both major parties as well as those with no affiliation would seem ripe for political discussion and debate, but Gross said that is not the case.

“Nobody talks about politics, no one wisecracks about any of the politicians, you get fired for that,” she said.

Her experience left her confident in the security and integrity of voting in Colorado and Boulder County. “I think that we have a good system going,” she said.

The added safety precautions in place this year don’t bother her. A dental hygienist for 40 years, she said wearing a mask all day is not an inconvenience.

Annie Colvin also will be returning as a Boulder County election worker this year after a hiatus from doing so in 2004.

She, too, said there is no place for partisan politics at polling places and said she wasn’t motivated by party to get involved, but rather by the process.

Fitzpatrick and Koppes have volumes of praise for volunteers such as Colvin and Gross.

“I cannot express enough thanks to election judges, especially those that have never volunteered before,” Koppes said. “It warms my heart.”

Fitzpatrick said, “We live and work in a truly remarkable community, where so many people want to participate in the process, not even pandemic is deterring them.”