The candidates’ combined fundraising more than doubled the previous record in a U.S. Senate race in Colorado, which was set in 2014. In fact, the spending even far exceeded the $36 million that super PACs and other committees reported in campaign expenditures this year.
Dec 6, 2020 12:00 PM By: Sandra Fish, Special to The Colorado Sun 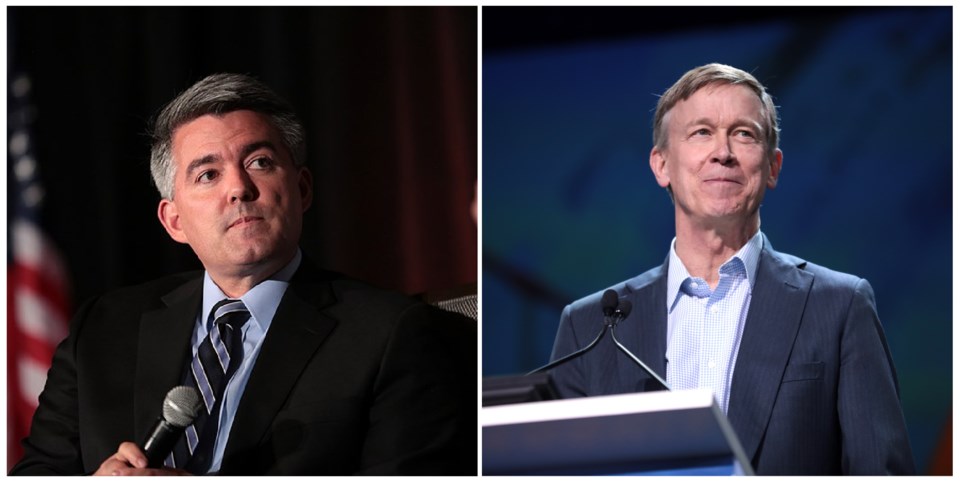 Editor's note: This story is a part of #FollowtheMoneyCO, a project of the Colorado News Collaborative, or COLab, edited by The Colorado Sun with support from the Colorado Media Project.

Gardner spent about $27.6 million through Nov. 23 in his losing bid for a second term, according to the reports filed Thursday.

The candidates’ combined fundraising more than doubled the previous record in a U.S. Senate race in Colorado, which was set in 2014. In fact, the spending even far exceeded the $36 million that super PACs and other committees reported in campaign expenditures this year.

All told, the Democratic candidate and and allied political committees to win the U.S. Senate race in Colorado — $8.6 million more than Republican Gardner and aligned GOP spenders, a Colorado Sun analysis shows.

Colorado’s contest was the 10th most expensive U.S. Senate race in the nation when candidate and outside money is combined, according to the Center for Responsive Politics, an organization that tracks campaign spending. The race ranked ninth when only candidate fundraising was considered.

Both rankings reflect that Hickenlooper, the former governor, held a solid polling lead for most of the race and the outcome did not appear in doubt in the final month.

Hickenlooper won 53.5% of the vote to Gardner’s 44.2%, according to final results. He was one of two Democrats in the nation to unseat incumbent Republicans in the U.S. Senate. But Democratic challengers lost in five other states even though Democrats far outraised GOP candidates in those races. Republicans hold a 50-48 advantage in the chamber with two Georgia Senate seats to be decided in runoff elections on Jan. 5.

“Democrats kind of underperformed in a lot of other places,” said Seth Masket, a University of Denver political scientist.

After a short-lived presidential campaign that ended in August 2019, Hickenlooper turned his sights to challenge Gardner and proved to be a fundraising juggernaut.

Hickenlooper raised nearly $23 million from July through September, more than the $20.5 million Democratic incumbent Sen. Mark Udall raised in his entire campaign in 2014. Udall lost to Gardner, who raised $12.5 million six years ago.

The other contest in Colorado that received national attention took place in the 3rd Congressional District, where Republican newcomer Lauren Boebert defeated Democrat Diane Mitsch Bush. The latest campaign reports show outside groups spent $9 million in a district that wasn’t expected to be competitive, much of that in the final two weeks of the race.

In the end, Hickenlooper raised $43.5 million to Gardner’s $29.1 million, even though Gardner began raising cash upon taking office in January 2015 and the former governor didn’t get started until August 2019.

Hickenlooper continued to outraise Gardner from Oct. 15 to Nov. 23, bringing in $4.3 million. His campaign spent $6 million during those final weeks of the campaign and additional expenses may come after this filing period. Hickenlooper had $2.4 million in cash on Nov. 23 and continues to fundraise, in part for the Democratic candidates in the Georgia runoff elections.

Neither the Hickenlooper nor Gardner campaigns would respond to questions about the fundraising reports.

Meanwhile, a joint fundraising committee created by Gardner spent $20,000 at Denver’s Ritz Carlton for catering and room rental on Nov. 6. Project West PAC, his leadership PAC spent $4,500 on a trip to Disney World in mid-November. The PAC reported raising nearly $73,000, almost all after Gardner lost the election.

The $36 million in outside spending reported by more than 50 groups to the Federal Elections Commission is considerably less than the $71.5 million outside groups spent on the contest between Gardner and Udall in 2014, according to the Center for Responsive Politics, which runs the OpenSecrets website.

Groups aligned with Republicans outspent those supporting Democrats by nearly $5 million, mostly through a barrage of TV ads attacking Hickenlooper beginning in March.

But the Senate Majority Project, a Democratic super PAC tied to Senate Minority Leader Chuck Schumer, was the top single outside spender at $10.5 million. That’s despite the fact the group pulled its TV ads two weeks before the election. The Senate Leadership Fund and National Republican Senatorial Committee combined to spend $16.4 million.

The outside money does not include nonprofits that don’t have to report their spending, but those organizations put in at least $15 million in the U.S. Senate contest, according to a Colorado Sun analysis of television advertising contracts.

The nonprofit groups spent millions on TV ads  that didn’t suggest voting for or against a candidate, allowing the nonprofits to avoid reporting requirements.

Rocky Mountain Values, a Colorado-based nonprofit that included several traditional Democratic groups among its partners, said it spent $5.7 million on TV and digital ads that began in October 2019 and criticized Gardner. At least $4 million of its money came from Sixteen Thirty Fund, a national nonprofit that funds progressive campaigns and causes.

Another new Colorado nonprofit, Unite for Colorado, spent at least $3.5 million in TV ads in the Senate campaign painting Hickenlooper in a negative light.

Several national nonprofits also aired TV ads in the Senate contest. Some of those nonprofits were affiliated with Democratic or Republican super PACs operated by Senate leadership.

How does the 25th Amendment work, and can it be used to remove Trump from office after US Capitol attack?
Jan 7, 2021 2:59 PM
Comments