Small protest held outside Colorado Capitol, no violence reported as Biden sworn in 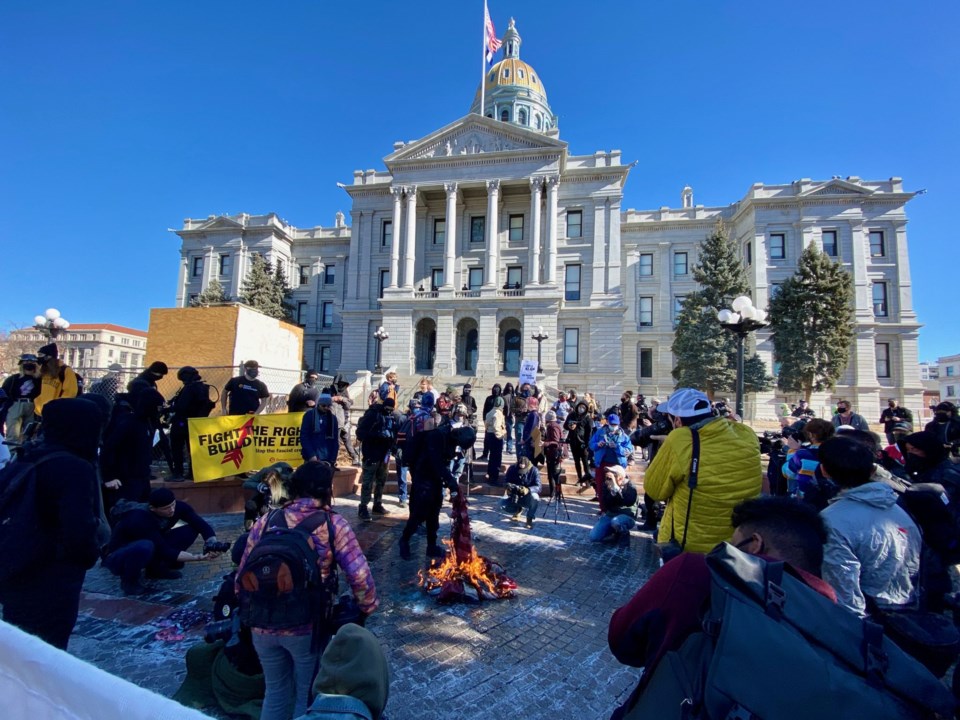 Rick Bryant has tried to follow guidelines and stay away from crowds during the coronavirus pandemic, but he was excited enough on Wednesday to gather, masked and socially distanced, with a few dozen others on the steps of the Colorado Capitol in Denver.

Despite nationwide fears of further election-related violence in the wake of the Jan. 6 attack by a right-wing mob on the U.S. Capitol, the scene in and around Denver’s Civic Center Park was quiet as Biden’s swearing-in proceeded in Washington shortly before 10 a.m. local time Wednesday.

Law enforcement agencies and the Colorado National Guard were on alert following an FBI bulletin earlier this month warning of “armed protests” planned at state capitols across the country, including on Inauguration Day. But only a few supporters of outgoing President Donald Trump showed up outside the Capitol building, outnumbered by onlookers and members of the press.

A man in a Trump hat briefly confronted people gathered on the Capitol steps, shouting about his belief in the QAnon conspiracy theory, many adherents of which allegedly participated in the Capitol attack. Two other demonstrators carrying a “Thin Blue Line” flag marched on the opposite side of Lincoln Avenue but soon departed.

Shortly after noon, a crowd of about 75 left-wing protesters arrived at the Capitol after marching from Cheesman Park. Organized by groups including the Denver Communists and the Denver Anti-Fascist League, the march was a planned demonstration meant to counter any potential pro-Trump event.

“We’re saying we abhor the far right more than we fear them,” organizers wrote in a Facebook post. “Not confronting the fascists is more dangerous than confronting them.”

Police closed off streets around the marchers and did not directly engage the crowd. Outside the Capitol, some of the left-wing demonstrators burned an American flag — a “symbol of racism, a symbol of genocide,” one protester said though a megaphone.

As the protest continued, some encounters between left- and right-wing demonstrators — and between left-wing demonstrators and police — became tense, but no violence or arrests were reported. The crowd gradually dispersed throughout the afternoon as demonstrators gave speeches, with many calling on the Biden administration to act aggressively on issues including police accountability, curbing oil and gas extraction, ending immigrant detentions and more.

“Biden/Harris: Free the Kids in Cages!” read a banner displayed by members of the Brown Berets, a pro-Chicano organization that traces its history back to the protest movement of the 1960s.

In a statement, Colorado Gov. Jared Polis and Lt. Gov. Dianne Primavera congratulated Biden and Vice President Kamala Harris and expressed their hopes that the new administration would begin making progress on everything from the COVID-19 pandemic and the economic crises to health care affordability and climate change.

“We look forward to working with the Biden administration to unify our country and build back stronger than ever,” Polis and Primavera said. “Colorado is ready and our country is ready to write the next chapter in American history where we respect the rule of law, put partisanship aside to solve problems, govern responsibly, and value truth.”

Bryant said he’s hopeful that under Biden’s leadership, the federal government’s pandemic response can finally get back on the right track.

“Get on top of this COVID-19, I think that should be the first priority,” he said. “Tackle this mess we’re in now, and get the vaccines rolling. They’ve got to get it moving better than it is.”

Colorado Secretary of State Jena Griswold gives awards to five people for their contributions to 2020 election
Feb 1, 2021 8:30 AM
Comments