Food truck is becoming a hometown favorite with its biscuit sandwiches and jam, too.
Heather A. Davis Dec 19, 2020 7:16 AM

Six months ago, Mike Simuns embarked on a journey, opening a food truck in Longmont during the summer of COVID-19. On June 8, Simuns and his mom, Lyn Simuns, opened the window to the food truck, Biscuits at Mike’s, for the first time.

Simuns, who has been working in the restaurant business off and on for approximately 20 years, said he learned to cook by working in a variety of places and picked up new skills along the way. He said at one point he was cooking at both a biscuit-making business in the morning and a fine dining restaurant at night.

Simuns, who bought the truck from a friend, said he believes part of his success is the simplicity of his menu. Food trucks run into trouble when they start adding too many or too complicated items to their menus, he said.

“It’s why I don’t do gravy. A lot of people think, well, you can do gravy, but for me, it’s about keeping it small and really easy and quick for people to get out of there,” Simuns said.

Simuns said he hopes his Biscuits at Mike’s truck will be the beginning of a food truck franchise. While his goal is to help other people open successful food truck businesses, he still delights in giving residents biscuits worth talking about. 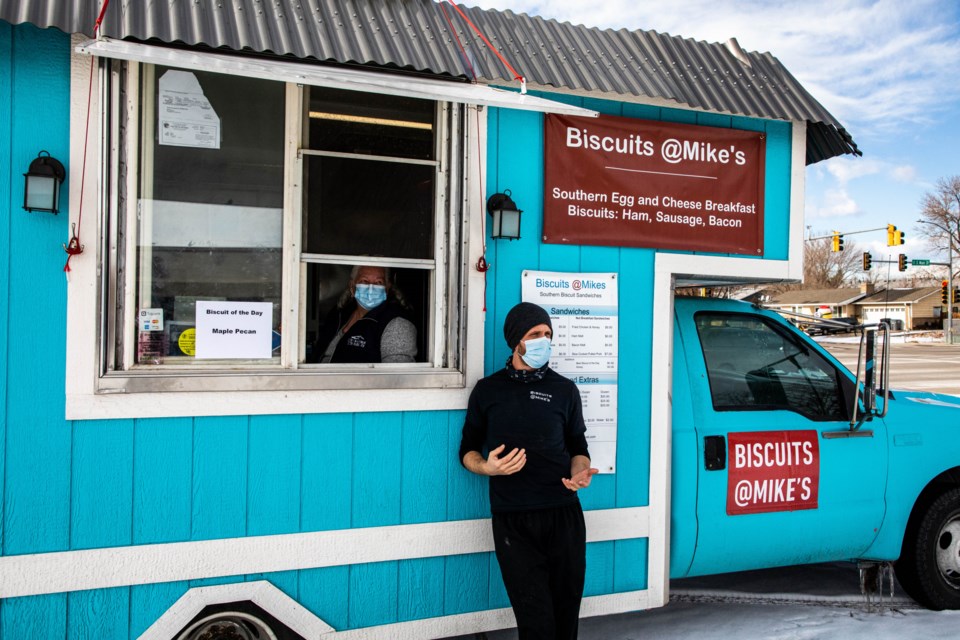 Mike Simuns and his mom, Lyn Simuns, opened the Biscuits at Mike's food truck in June.(Photo by Matt Maenpaa)
Simuns’ neighbors and friends, Brian and Bebe Englebardt, have helped from the beginning. Not only giving him a place to work on the truck by offering up their driveway, but also serving as biscuit taste testers as Simuns was creating the recipes. Brian Englebardt even has a sandwich named after him — the “Brian” is a biscuit Simuns recommends himself.

“When he had that fried chicken sandwich with honey, I said, “Oh wow, that would be so good with an egg,’” Englebardt said. “A nice little over-easy egg would make it really luscious, and the cheese on it would be good.”

Englebardt said the egg was a challenge at first, but now it’s just right. But he warned diners to be prepared for a messy sandwich — which he noted was part of the fun of eating the chicken, egg and biscuit sandwich to begin with.

Another longtime Longmont resident, Heather Nelson Conkright, also has a biscuit named after her. In July, she found Biscuits at Mike’s through a social media post and decided she had to give it a try.

“Biscuits are one of those things I don’t love to make, but I love to eat,” Conkright said. “Fried chicken and biscuits are my jam.”

Conkright said on her first return trip, she asked Simuns if she could modify the order.  Of course, he did.

“It was a ham melt, add fried chicken and plum jam,” Conkright said. “Kind of a spin on a Monte Cristo.”

She loved it and continued to order it every week, and eventually, Biscuits at Mike’s added the combination to the menu as the “Heather.” 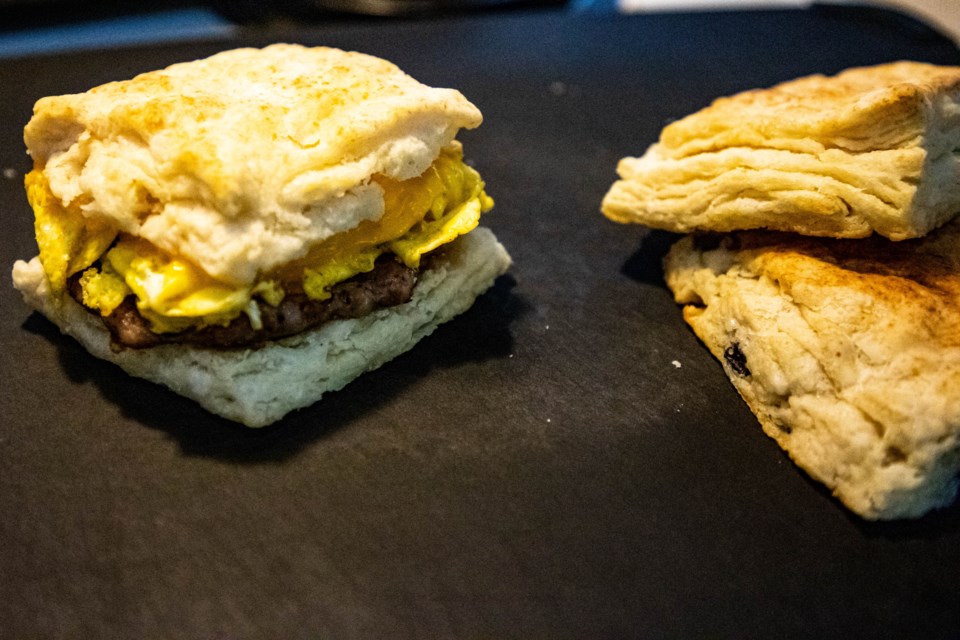 A sampling of the fare to be found at the Biscuits at Mike's food truck.(Photo by Matt Maenpaa)
One thing both loyal customers talked about was the dog biscuits at Biscuits at Mike’s, which are made from leftover biscuits. The dogs love them and the owners love that Simuns spoils their pets, too.

“Mike brings such joy and compassion to what he does. It’s just really apparent when you go down to get the biscuit it’s not just getting the food, it’s about seeing Mike and seeing Lyn,” Englebardt said, “They love being there, and it creates a really fun lively sense of community around that funky little truck that he drives.”

Biscuits at Mike’s will be serving free biscuits from 8 a.m. to 10 a.m. Christmas Day in the south parking lot at Roosevelt Park. The freebies are limited to one sandwich per person.

“This year, with the way everything’s going, we know a lot of people aren’t getting together with their family, there’s going to probably be a fair amount of people who are going to be alone on Christmas,” Simuns said. “And so we thought a really good gesture as kind of a thank you to the community would be to go out on Christmas Day and give out biscuit sandwiches.” 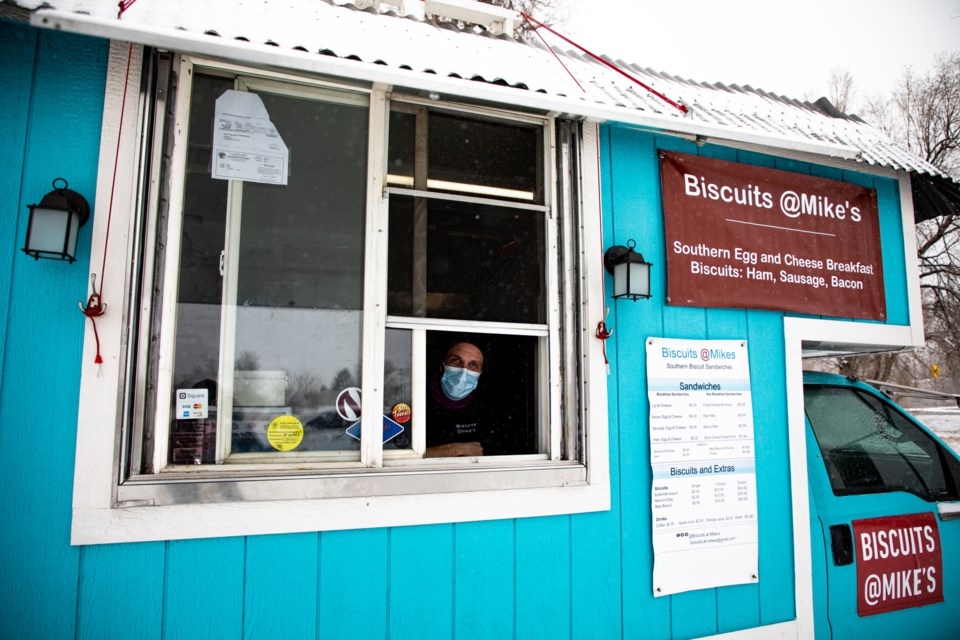 The Biscuits at Mike's food truck is drawing a faithful following since hitting the streets of Longmont in June.(Photo by Matt Maenpaa)