Longmont craft beer community rallies around one of its own

The craft beer industry is known for its cross-company support. Longmont’s craft brewers are no exception. When one of their own, Grossen Bart’s head brewer Walter Bourque, was diagnosed with testicular cancer in July, they rallied for him. They’re now brewing and releasing a pair of craft beers to be sold as a fundraiser to offset his treatment costs.

In many ways, the effort is a case where the “LongmontStrong” attitude has shown up in a specific segment of the community to help one of its members. Some might even say the goal is “WalterStrong.”

The first beer to be brewed was a Double IPA, named Science, made with a recipe developed by Grossen Bart's interim brewer Nicole Reimau; Tim Matthews, head brewer at Oskar Blues Brewing, and Josh Nardm, head brewer at Liquid Mechanics. Grossen Bart’s co-owner and founder Taylor Wise said, “Walter always wanted to name a beer Science. I wanted to have a personable beer with the help of everyone else that liked Walter and brewed to a high standard. That’s what he deserved and that’s what Coloradans expect.”

The brew style was one of Bourque’s favorites and comes in at an 8% alcohol by volume, or ABV, that Wise said Bourque would appreciate. Though Bourque hadn’t had a chance to taste the beer as of publication, Wise plans to get some to him shortly where he’s being treated near family in Texas.

Once in the glass, the beer is drinkable and fresh, made with Mosaic, Lotus, and Medusa hops. It shows fruit notes of melon, mango, and stone fruit with a  piney finish and a nearly creamy smoothness at the end for balance.

For someone with as large a presence in the Longmont craft beer community as Bourque, a single brew isn’t enough. On Friday, brewers and staff from five area breweries gathered at Left Hand Brewing Co. to make an ESB as a second benefit beer. The work got going early in the day, partially because that’s when brewers usually get to work and partially to save time for attending the Great American Beer Festival awards that were being held remotely later that night.

Mid-morning the group was gathered next to the brewing equipment, talking shop and enjoying beer brought from attendees’ respective breweries. The atmosphere reflected the same kind of community that rallied to support Bourque in the first place.

In attendance were Ryan and Robin Wibby, Matt Collins and Paul Kachmer of Wibby Brewing, whose Volksbier Vienna won a gold medal in the beer fest’s American Amber Lager category. Also there were Roger Anderson of Shoes and Brews, Dan Ditslear of 300 Suns, Shannon McGrath of Oskar Blues and Adam Lawrence and Pat Brown of Lefthand Brewing.

As the head brewer at the host brewery,  Lawrence coordinated much of the brew details and helped facilitate recipe development.

“We all met last Friday over some beers in the Left Hand Tasting Room and talked about what Walter liked to drink and make. He was a big fan of a beer we used to make, a double sawtooth Imperial ESB. That inspired us to make an English-style bitter. A really big one,”  Lawrence said.

Many of the ingredients for the brew were provided by participating breweries and anything else needed was provided by Left Hand. Limited amounts of the beer will be available at all participating taprooms and Grossen Bart, as the pilot brewery has just a seven-barrel capacity.

In another indication of what it means to them, when the beer is released, group members are planning a larger benefit event. The exact release date wasn’t set at the time of publication, but it is expected to take place in early November. 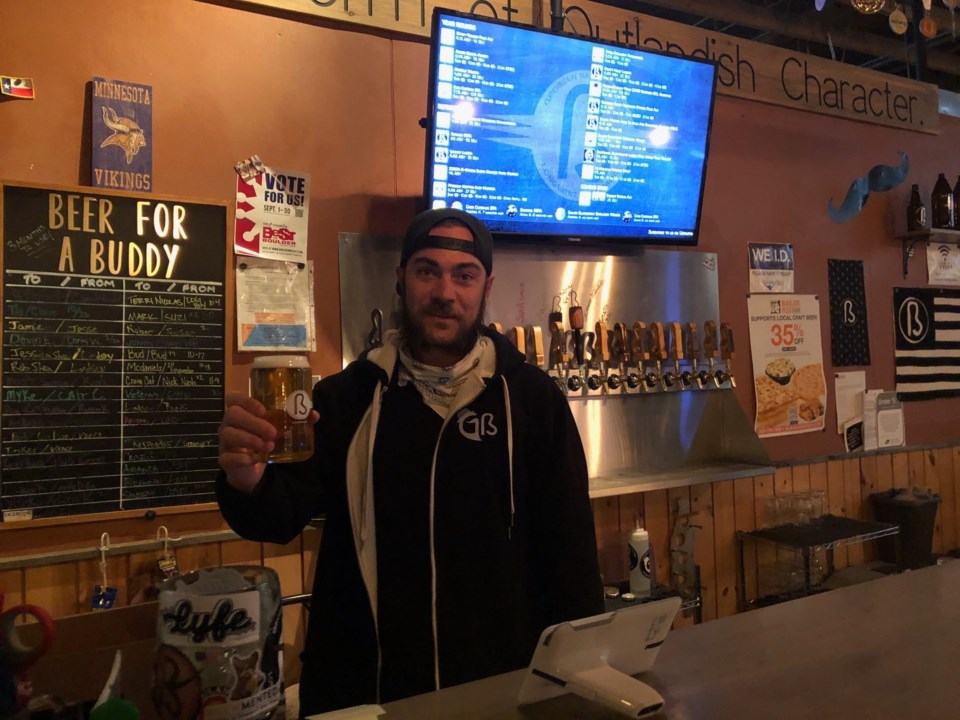 Co-owner and founder Taylor Wise behind the bar at Grossen Bart Brewing. (Photo by Deborah Cameron)