In the past year, craft breweries have had to manage in the wake of tremendous impacts caused by the coronavirus pandemic. They’ve had to respond on the fly to an array of new regulations, manage shifting revenue streams, create new outdoor service areas, and take extraordinary efforts to protect the health and safety of staff and customers.

In addition, many also have contended with unexpected impacts. For example, those that expended extra effort to ramp up packaging efforts to sell outside of taprooms found they had to deal with a serious shortage of aluminum cans.

With pandemic-related restrictions expected to continue well into 2021, the Colorado Strong Fund has launched a new awareness campaign. Known as Safer with Foam, the campaign aims to encourage customers to support taprooms with their wallets, follow breweries on social media and donate to the fund.

The Colorado Brewers Guild is one of the main underwriters of the fund.

“Buying beer to-go, following all local guidelines for social distancing and safe consumption, and purchasing gift cards and merchandise helps breweries keep the lights on so they will be there for us when we can safely visit,” Brewers Guild Executive Director Shawnee Anderson stated in a news release.

The Brewers Guild is joined in its support of the Colorado Strong Fund by a handful of other partners including Longmont-based Left Hand Brewing Foundation and Sticker Giant, as well as Ball Corp. and On Tap Credit Union.

Safer with Foam is a follow-up to the fund’s initial effort last year to support breweries through the brewing and distribution of a collaborative recipe for a pale ale called Colorado Strong. It was brewed by more than 125 Colorado breweries and raised more than $115,000.

“We are so proud to continue this effort in 2021 with the launch of Safer With Foam and encourage all members of the Colorado brewing community to spread the word,” Eric Wallace, president and cofounder of Longmont-based Left Hand Brewing and president of the Left Hand Brewing Foundation Board of Directors, stated in the news release.

Other Longmont breweries responded to the effort, grateful for the support.

Jean Ditsler, co-owner of Longmont-based 300 Suns Brewing, said, “I think, as far as drinking establishments go, breweries have gone above and beyond in exceeding health department requirements and suggestions to keep their employees and customers healthy. The Safer with Foam message that these are especially safe places that care about the people in their community seems like it just speaks truth.” 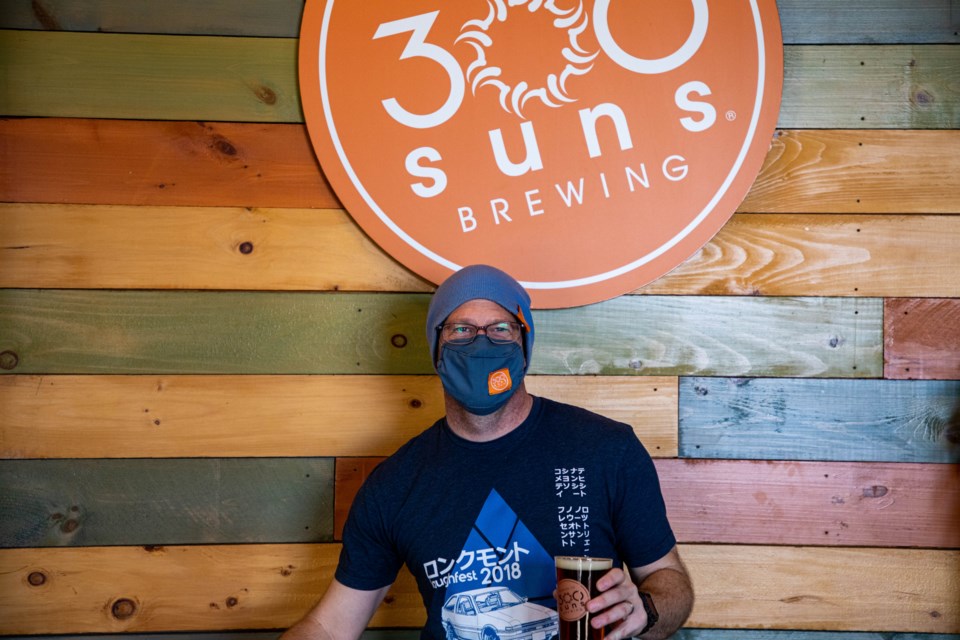 Dan Ditslear, co-owner and brewer at 300 Suns Brewing, raises a pint. By Matt Maenpaa
Leslie Kaczeus, co-owner of Bootstrap Brewing, which began in Niwot and moved its packaging facilities and a taproom to Longmont in 2017, echoed the sentiment.

“They’ve always been such a strong advocate for Colorado’s local, independent craft breweries. The latest initiative is a wonderful reminder for consumers to continue to support their local breweries,” she said.

While it is too early to tell what kind of impact the campaign will have on area craft breweries, there’s reason to be positive. If the community responds, it can only help craft brewers weather the pandemic’s impacts so they’re still around when daily life returns to normal.