Tastes of the islands make their way to Main Street

Longmont diners can dig in to Caribbean food close to home at Island Woman Shanty.

Whether it’s crafts or culinary delights, Lesa Gumbs has a knack for creating.

Now Longmont residents can get a taste of both at her combined retail and restaurant space at 1515 Main St., No. 5, which is home to Island Woman Shanty and Modah Naycha’s Creations. Modah Naycha, or simply Naycha, is more likely the name by which locals will recognize Gumbs, who has been catering and crafting in the city since moving here in 2009.

Originally from Charlotte Amalie in the U.S. Virgin Islands, Naycha has infused the space in Bridge Park Plaza with the artistic flair, brightness and energy of her childhood home, as well as her lifelong passion for good food.

“It’s a Caribbean thing, crafting and cooking,” she said.

A chef from age 14, both cooking and crafting are in Naycha’s blood. Her mother, Rose Blyden, also a crafter, ran a restaurant for 30 years. And her four brothers are chefs, including celebrity chef Theo Gumbs, who has made appearances on The Wendy Williams Show. It was Theo who started a food truck in the Virgin Islands and put her to work running it as a teen.

Naycha’s culinary adventures continued when she moved to the United States at age 19, landing a job in New Jersey the day her plane landed. From New Jersey, she went on to Georgia, where she was a chef at the famed Hairstons Dinner Club, whose clientele included such celebrities as Chris Tucker, Martin Lawrence, Judge Joe Brown; and two Whole Foods stores, including the Ponce de Leon location, which counted Elton John among its customers. Her time in Georgia also included a stint at the InterContinental Buckhead Atlanta hotel, a five-star and five-diamond resort where she fed stars such as Mariah Carey, The Jackson 5, Jerry Springer and Enrique Iglesias.

Naycha came to Colorado at the request of friends who had moved to Boulder and asked her to help out. So she did, settling in Longmont because it felt more family friendly to her as a mother of two. And she said she kept her chef knives sharp, working at Colterra, Serrano’s Southwestern Grill & Bar, the Greenbriar Inn and Via Perla.

She revived her crafting side in Longmont, too, setting up an office and then building herself a booth to sell her wares at various festivals — being inspired to do so after reading about Rhythm on the River. But she kept on cooking, for years running a catering company from which Island Woman Shanty takes its name. 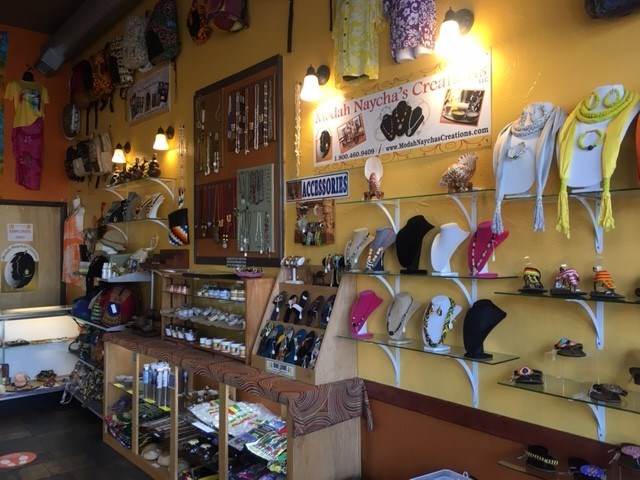 A selecton of Modah Naycha's Creations merchandise on sale at the combined restaurant and retail space at 1515 Main St. No. 5.(Photo by Julie Baxter)
The food at the Shanty, as the name suggests, harkens back to her island roots and customers have raved about it.

Especially popular, she said, are the Johnnycakes and pates — hand-rolled dough stuffed with ground meat, chicken, shrimp or codfish.

To Naycha, keeping the food true means it’s all hand made — even her kids, Lexus, 14, and Lashelle, 10, get in on the act. Both are blossoming chefs in their own right, Naycha said, and they have their own chef knives, too.

Authenticity also means not all menu items are available every day, since the right fresh ingredients can be scarce or expensive or both, especially seafood, including her favorite, red snapper, which she said is her favorite item on the menu because it reminds her of home. Naycha’s dad, Liston Gumbs, was a police sergeant who also loved deep-sea diving and fishing and she grew up eating his catches cooked right on the beach. Frozen fish is a poor substitute, she said, so on the days she can’t find what she wants, she simply won’t offer those selections.

Know a business we should know about?

If you've seen a new business around town or are opening one, let us know about it by emailing info@longmontleader.com.

Island Woman Shanty at its heart is a labor of love funded by her own money and by her own sweat. But it is a passion project that almost didn’t happen. It took the convincing of David Salzman to become a reality.

Salzman owns Bridge Park Plaza and when Blue Corn Tacos relocated within the building, he urged Naycha to open up in its former spot.

She was dead set against it and turned him down three times. “I wasn’t interested, especially in a pandemic,” she said.

But he urged and urged again and she said he finally swayed her with a directive rather than a request. “He said, ‘You’re going to take that space and we’re going to work on it together, as a team,” Naycha said. “He wanted something different, something Longmont had never had.”

Salzman said he pushed because he loves Caribbean food and is a fan of Naycha, who previously had a space in the building for Modah Naycha’s Creations.

“Caribbean food is hard to find in Colorado. You can't go into McDonald’s and ask for curried goat and, actually, if they sold it I wouldn’t eat it anyway,” he said.

He also found a way to make it work financially.

“I did some special things to ease her into it. If you’ve got a passion and don’t have deep pockets, it can be hard to pull off. Personally, I love Caribbean food so it probably hit me a little bit emotionally that I could help someone start making good quality food in the area,” he said.

Once the decision was made to open the restaurant, it was full steam ahead and even shoulder surgery didn’t slow Naycha down. She said she was painting the space the day after surgery.

She got used to running on no rest, and when she finally did take some, her kids stepped in. Naycha recalled one night when the exhaustion was too much and she opted to go to bed, leaving the cooking for the next morning. Lexus, however, had other plans, and with the help of sister Leshelle, he worked all night to prep for the restaurant’s next day. Their skill in the kitchen earned high praise from diners, Naycha said.

“I was impressed and proud of him,” she said, adding “I can guarantee if I wasn’t here, they’d throw down.” 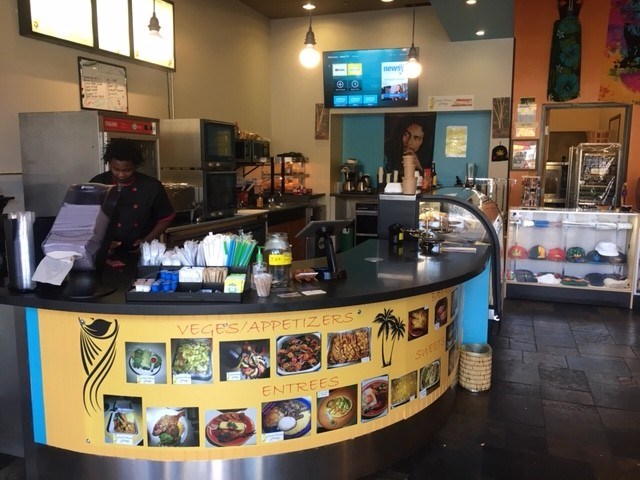 Lexus at work behind the counter at Island Woman Shanty on Oct. 6. (Photo by Julie Baxter)
Marketing for Island Woman Shanty has been solely word of mouth, with Facebook and Nextdoor providing avenues to connect with would-be customers and friends alike.

Friends, which Naycha joked she doesn’t have any of because she’s too busy, also pitched in. Among them were Tammi Allmendinger, owner of FedEx Office inside Walmart at 2514 Main St.

Allmendinger put together the Island Woman Shanty menus and helped with all of Naycha’s printing needs. She said she did so not only to support Naycha, but also as one small business owner supporting another. And she, too, raved about the food and its chef.

“Her food is awesome, it’s delicious. She’s such a warm and friendly person, being in the food business is perfect for her,” Allmendinger said.

Island Woman Shanty recently hired its first employee and marked 30 days in business earlier this month, but never did hold a grand opening because of the coronavirus pandemic. Naycha said she hopes to someday celebrate and also to hold a Caribbean carnival in the parking lot complete with moko jumbis, which are stilt walkers, and a masquerade. Until then, she hopes customers will find her food and merchandise reason to celebrate.

Correction: Lesa Gumbs' name was misspelled in the original posting of this story.