While Cheese Importers is relatively new to South Main Street, having taken over the former Longmont Power and Communications building in 2012, it has been operating in the city since the early 1970s.
Deborah Cameron Dec 21, 2020 12:00 PM

One of Longmont’s most delicious walk-in coolers is located on South Main Street at Cheese Importers. The refrigerated space contains hundreds of cheeses and within 10 minutes, the cooler broadens what customers expect from a cheese board.

While Cheese Importers is relatively new to South Main Street, having taken over the former Longmont Power and Communications building in 2012, it has been operating in the city since the early 1970s. It’s a family business with roots that reach back to the ’60s when it was founded by owner Samm White’s parents, Linda and Lyman White.

Upon returning from Europe, they wanted to bring some of the food culture they’d found there to local customers.

“They were interested in providing quality products rather than oil-based ‘government cheese.’ They thought there was a bunch of garbage being sold, and they wanted to share the joy of what real food meant,” White said.

The wholesale cheese provider existed alongside other natural food businesses across Colorado and Boulder County.

“We grew up with the Iselys, owner of Natural Grocers, and sold them cheese,” White said. ”We did a lot with Wild Oats and Crystal Market. We were always sharing great food.”

White recalls how his father showed larger customers and restaurant chefs what cheese with real milk could taste like compared to what they were using. Current customers appreciate the same focus.

James Ross, co-owner of Rosalee’s Pizzeria on Main Street, is one of those customers.

“As a restauranteur, to be able to get the globally recognized quality of product that they provide to us is great. The fact that they’re local helps make what we cook that much better,” Ross said.

White appreciates that his company reaches individuals as well as restaurants and other larger-scale customers. 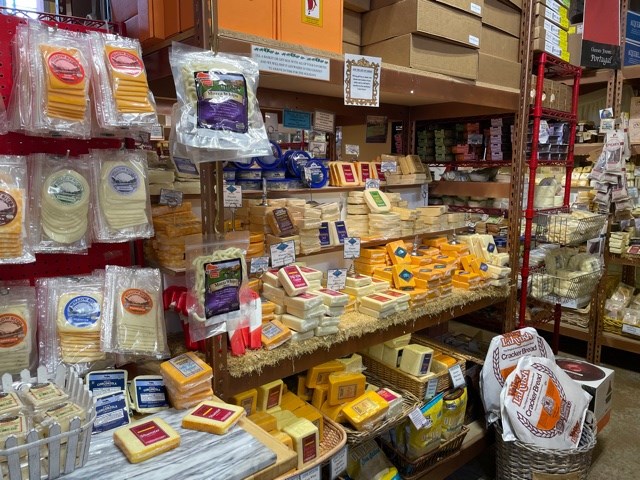 A sampling of the selection to be found at Cheese Importers. Photo by Deborah Cameron
“One of my favorite things to witness is for a customer to bring in a friend or family member from out of town and to guide them through my store as if they worked there,” he said. “They talk as if it’s an amazing place that they want to share. It’s amazing to hear that passion about our business.”

Out-of-state customer Denise Chastain stops at the store whenever she visits her parents in Longmont.

“It’s my favorite ‘wish list’ destination,” she said. “I can find something delightful on every shelf and table. I leave with a lot of cheese, but I can't tell you how many pictures I have taken of items and books I want to remember for later.”

Despite its success, there were challenges for the business. In 2010, White’s father died in a car accident. A year after that, his landlord for the 33 S. Pratt Parkway location informed him the business’ lease wouldn’t be renewed.

Finding a new space was stressful until White’s mother noticed the 1930’s-era Longmont Power and Communications building and inquired about it. It was being used as museum storage, and the city was willing to work with the Whites to convert it.

Moving into the new space wasn’t easy. The Whites encountered a discarded, full diesel tank under concrete, an 8- to 10-foot bull snake, and the possibility of a ghost named Henry. Ultimately, the Whites made the property into the storefront customers now see in less than four months.

In retrospect, White is glad the move happened. Just a year after the move, the 2013 floods hit, heavily impacting the area of its previous Platt Parkway location.

“If we had been at that old building, we’d have been underwater and probably out of business,” he said. “Who knows how things happen or why they happen. I am just thankful for all of it, even the stressors.”

2020 holiday celebrations are a perfect time to enjoy quality foods and time at home and appreciate family time. With that in mind, White shared some of his tips for creating a cheese board guests will enjoy:

Correction: The Iselys name was misspelled in the original posting of this story.