Through careful cutting and resewing, the company is upcycling shirts into interesting and fashionable new designs. There are five patterns available, and each one-of-a-kind finished shirt contains graphics from multiple sources.
Deborah Cameron Feb 8, 2021 7:00 AM

Most people have a drawer full of T-shirts at home. While they repeatedly wear a few favorites,  others wind up folded and stored for months at a time or relegated to thrift shops, used clothing bins and even landfills.

One Longmont company, Graphic Revival, is doing its part to reduce T-shirt waste. Through careful cutting and resewing, the company is upcycling shirts into interesting and fashionable new designs. There are five patterns available, and each one-of-a-kind finished shirt contains graphics from multiple sources.

“At every event you go to, you get a T-shirt. They’re just one of the most overproduced clothing articles out there,” Lane said. “They’re not really meant for a woman’s body. People cut them or tie them to make them look good. I thought I could do that for them.”

Lane said the idea for the business originally came from her ,desire for people to enjoy T-shirts more. It was only after she started that she realized how polluting discarded T-shirts could be.

“Estimates we’ve seen indicate there are 2 billion T-shirts made a year and 700 gallons of water, and dyes that pollute streams are used in the process of making each one,” she said.

With Graphic Revival’s process, the only water used is what is required to wash a load of previously worn shirts. Dyes and other pollutants don’t enter into the picture.

Lane sources her shirts from three places: thrift shops; T-shirt brands with misprinted, damaged or overstocked items; and screenprinters that have made a mistake on an item. 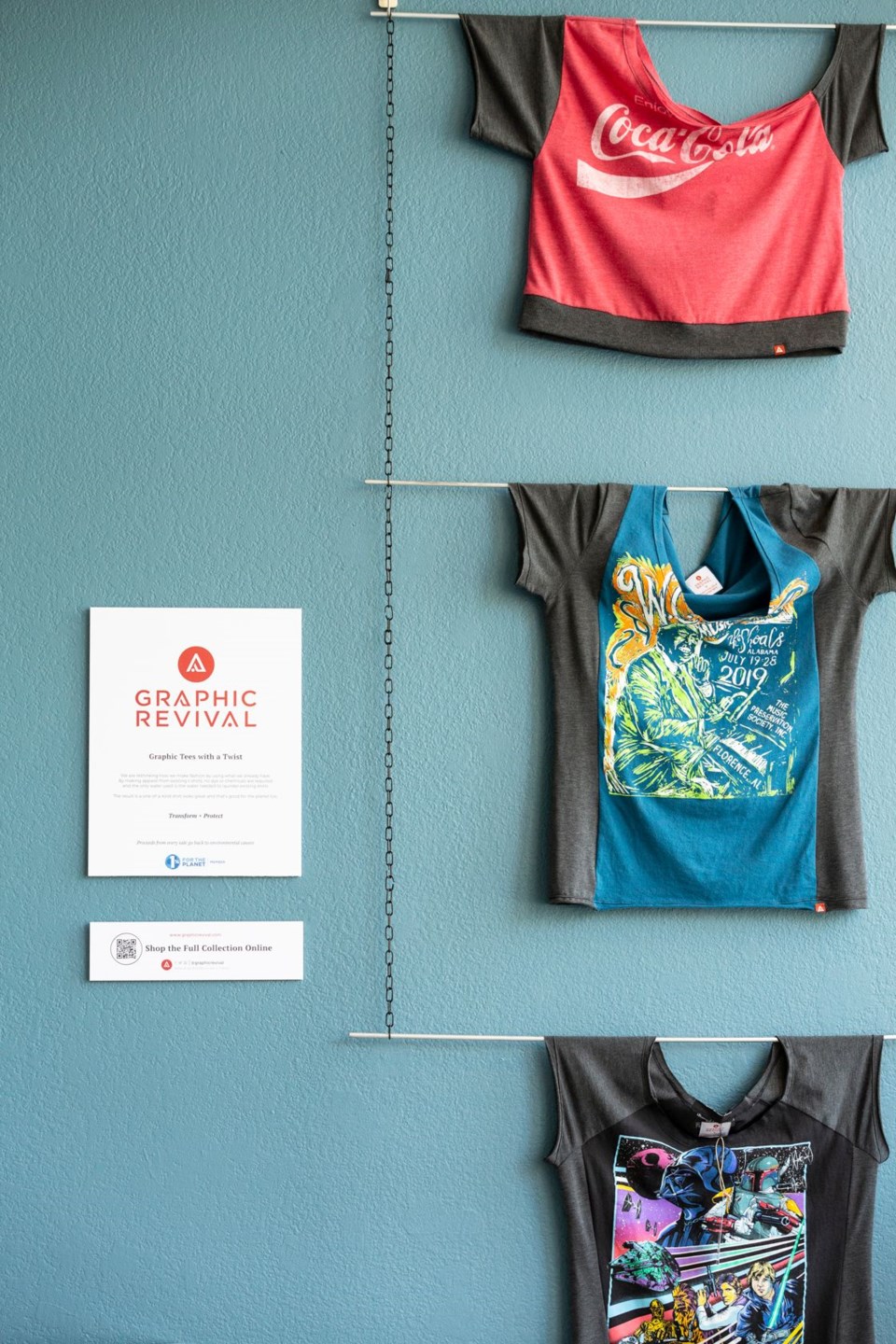 Graphic Revival merchandise featured at the Bricks Retail pop-up store.(Photo courtesy of Lisa Patchem)
That last source can yield the most exciting shirts, she said.

“A lot of times, if a shirt has a mistake or something gets off-centered, screenprinters will use that shirt like scratch paper. They’ll print over and over on it, and then there’s a mishmash of graphics that end up being really cool,” Lane said.

Once the T-shirts are finished, they can be purchased on Graphic Revival’s website or at Bricks Retail, a Colorado-centric marketplace in Old Town Longmont. They also are available at Garbarini in Cherry Creek and FM Boutique on North Broadway in Denver.

Graphic Revival received help as it got off the ground. It was a member of the 2020 cohort of the Innovate Longmont accelerator program.

Ferguson was thrilled to have Graphic Revival as part of their program.

“As a solo founder, it can get lonely and hard working through all the growth steps. Amy had a really polished and enthusiastic demeanor through the process, which was hard considering our sessions were remote due to COVID,” Ferguson said.

In addition to working with the accelerator program, Ferguson also owns Bricks Retail and featured Lane’s shirts there where she could experience customer response to them firsthand. “Amy has a great idea of what will look ‘cool’ and the graphic fronts of her shirts attract attention immediately. Plus, people comment on the environmental message with nods of understanding. After they come to our store, many people go to her website to see what else is there,” she said.