The September 17, Longmont City Council meeting included two presentations on the proposed 2020 budget. These presentations were originally planned to be on Sept. 10 and Sept.
Sep 21, 2019 12:00 PM By: Macie May 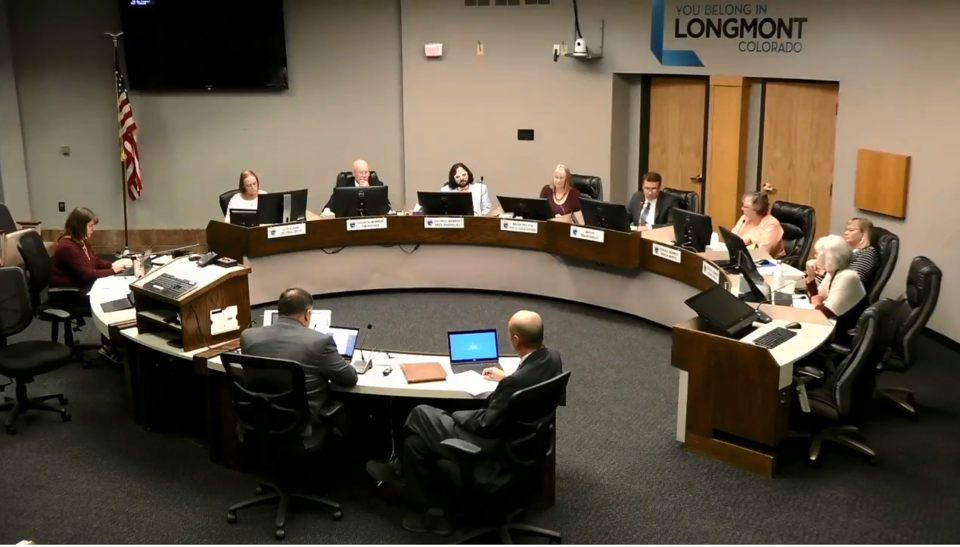 The September 17, Longmont City Council meeting included two presentations on the proposed 2020 budget. These presentations were originally planned to be on Sept. 10 and Sept. 17, however, the council ran out of time to discuss the budget at the Sept. 10 meeting.

According to Joanne Zeas, ADA (American with Disabilities Act) coordinator, there are many standards of measurement used to determine what a living wage is.

The Colorado Center for Law and Policy standard is also used by the League of Women Voters (LWV). According to a presentation by Zeas, this standard "provides different living wage recommendations based on both household size and age of dependent children."

Currently, for one working adult in a household, the average wage is $14.83; for two working adults, one pre-school child, and one school-age child the average $20.32. However, in the current City of Longmont pay plan the living wage for a regular employee is $13.65 based which was implemented in 2018 and was not updated in 2019.

The LWV averaged these two numbers to recommend the living wage be set at $17.42.

Councilmember Tim Waters moved that city staff include the $17.42 living wage for full-time positions for City of Longmont staff, contractors, and that language be added to contracts that stipulate that expectation.

The living wage readjustment would, currently, only affect one full-time city position because Longmont already has a higher wage base.

A city-wide priority based budgeting process was implemented in 2013. In 2018, the process was updated to include Envision Longmont as the City's desired results. The process includes several steps that end with a prioritized list of city services, a list of which can be found on the city's website.

The numbers for this section of the budget only include the operating budget. Funds for capital improvements, debt service, or any internal transfers between fines are not included in these numbers because they are not subject to the priority based budgeting scoring process.

Here is an attachment of the Quartile Graphs for the 2020 proposed budget.

This is a list of community programs accounted for in the priority based budgeting process. This sheet also explains which quartile the program falls in.

Jim Golden presented that full-time employees (FTE) would be added to the General Fund. Malloy added that other FTE positions were proposed to be added to other funds in 2020. Those positions include a .75 time grant coordinator and 6 FTE in the electric and broadband fund.

Malloy mentioned that some corrections to positions due to market standards and fund allocations will be made to the 2020 proposed budget and brought before Council on September 24.

For Level 2 funding the City requires each department who receives this funding to complete forms that help the City assess the level of need within that department.

The things considered are:

The following document shows the departments who receive Level 2 budgeting, their requests, programs they provide, and which quartile they are expected to possibly receive the funding.

The priority based budgeting list for supporting Longmont residents includes:

Early childhood education is proposed to have $50,000 of ongoing and $150,000 of one-time resources. This would help train providers, issue licenses, and support to raise the quality of care for children in childcare centers.

Harold Dominguez, city manager, stated that these numbers are based on what the city believes are ongoing versus one-time costs for the program. In the future, those budget numbers may change as the program is developed.

Mayor Brian Bagley felt that the funding for early childhood was not enough and wants to see a focus set on the education portion of childcare. "The biggest bang for our buck, if Council would have the discipline to just focus on our kids for the next forty years, our problems would be alleviated."

Human service funding is proposed to get a 2.37% or $282,834 increase in ongoing funding, making their total budget $1,589,044 in 2020. These additional funds would be allocated toward homeless services.

An additional $175,000 of one-time funding is being asked to be allocated for an information exchange project for Enabling a Caring Longmont. This project focuses on coordinating information between service providers who focus on care and services around the most vulnerable in our city.

The proposed based budget also supports places around Longmont. This includes several items for the sustainability program:

Councilmember Marcia Martin asked city staff if the sense of urgency felt by the community to move sustainability forward at a faster pace was included in the proposed budget to push the issue forward faster.

According to staff, the funding proposed includes updating the plan over the next two years. The update will identify Longmont's changing climate needs and outline a plan. This plan is a year ahead of its scheduled update to align with the updates to Envision Longmont.

Councilmember Tim Waters expressed concern about contingency funding should Council see a climate resolution in the near future. Golden mentioned that as of now, there is $150,000 unallocated to any department just for situations like this, should they arise.

The following list is comprised of the one-time expenses from the Public Safety Fund. These expenses total $1,360,896.

The Incremental Development Revenue is based only on revenue accrued from building permits and planned review fees on new dwelling units. Additionally, this revenue is only accessible after the base level has been superseded.

This revenue, under the financial policy, can be used for "ongoing expenses subject to reduction when permit levels decline," states Malloy in her presentation to Council.

Malloy also pointed out that there are no new FTE or ongoing additions for 2020 within this fund.

It is estimated that the marijuana tax will bring in $274,000 in 2020. As per Council's allocations, half of the 3% tax on marijuana goes to affordable housing. The other half, $137,000 remains unallocated.

Dominguez stated that the unallocated funds have been used for special projects within the city that have needed unexpected funding. For the future, he pointed out that Council could allocate this money as one-time funding, a contingency fund for the city manager, or in preparation of a possible recession.

Mayor Pro Tem Polly Christensen suggested the unallocated revenue be given to the Longmont Public Library. She proposed a motion to support this concept.

Martin countered by stating that the idea was sound but that she would rather not earmark these funds just yet. Martin would like to see the funds go toward climate change support.

Mayor Brian Bagley suggested that staff bring back on a future agenda, a list of possible items to fund with this money so Council has a chance to make an informed decision.

Three Longmont chefs share their favorite portable recipes for July 4
Jul 4, 2020 1:00 PM
Comments
We welcome your feedback and encourage you to share your thoughts. We ask that you be respectful of others and their points of view, refrain from personal attacks and stay on topic. To learn about our commenting policies and how we moderate, please read our Community Guidelines.