Boys basketball: Longmont misses out on league title after 47-38 loss at Windsor

In a battle of the top-ranked teams in their class, No. 1 Windsor (10-1 overall) topped No. 2 Longmont 47-38 on Tuesday to claim the Northern League title and perhaps the top seed in the state postseason tournament that starts next week. Longmont fell to 9-2.
Matt Hagerman Mar 3, 2021 9:20 AM

As his son and other assistants guided final warm-ups, Longmont boys basketball coach Jeff Kloster sat quietly and sized up his teams’ opponents at Windsor High School. After close to 500 wins in his 27-year tenure, three trips to the Class 4A state finals since 2015 and a state championship in 2018, the Trojans expect victory.

Yet in a battle of the top-ranked teams in their class, No. 1 Windsor (10-1 overall) topped No. 2 Longmont 47-38 on Tuesday to claim the Northern League title and perhaps the top seed in the state postseason tournament that starts next week. Longmont fell to 9-2.

Before a boisterous but mostly socially distanced crowd, the Wizards overcame early deficits to take control in the second half and triumph over a rival that often overshadowed them. Both the Trojans and Wizards play two non-conference opponents this week to close out the regular season.

“We’re doing what we can with a tough loss,” Longmont senior Aiden Gaddis said after Tuesday’s defeat. “We’ve just got to come together and get these next two to get a top-four seed. We’re a brotherhood. We play together, we run together. Most of us play football together. We just love each other and we’re all friends and we’ve just got to stay tight.”

“It’s the battle for No. 1,” the public-address broadcaster said as he introduced both teams as if he were a tuxedoed announcer in a boxing ring. Longmont’s Keegan Patterson got the first bucket but Kloster soon had to use a timeout as Windsor jumped out to a 7-2 lead. 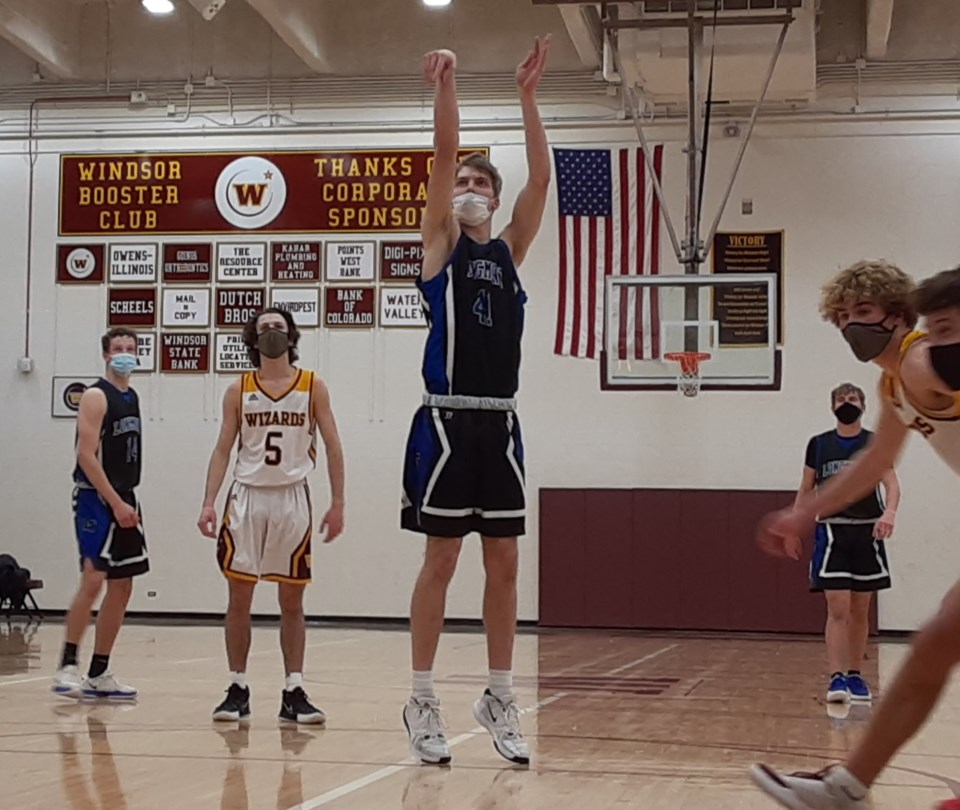 Longmont's leading scorer Eddie Kurjak takes his shot at Windsor on Tuesday. By Matt Hagerman/ For The Leader
That’s when Eddie Kurjak started heating up. The 6-foot-9 senior Trojan standout got some favorable looks and so did some of his teammates. Longmont would go up by as much as 9 points in the second frame. At halftime it led 28-24.

The Trojans had some stout defensive possessions that slowed down the normally high scoring Wizards. But in the second half it was Windsor who had the big stops. Reclaiming the lead late in the third quarter, the Wizards held Longmont to just four made field goals in the second half.

The Trojans also had several unforced errors and missed some key rebounding opportunities. Nineteen turnovers were too much to overcome against a talented trio of Windsor seniors, led Tuesday by Jaden Kennis. Despite another outstanding effort from Kurjak, struggling to keep his mask on his nose on both ends of the floor, Patterson and other upperclassmen made poor passes and shot-making choices down the stretch.

“We lost a regular-season game,” Patterson said. “We’re not going to hold our heads on that. I think it’s important that we bounce back. I don’t think anybody was proud of the way they played tonight, myself included. I was disappointed in my play tonight and feel like I let the team down. But we’ll come to work, we’ll be ready and we want to see those guys in the playoffs because that’s when it counts. One and done? We want to get the win there.” 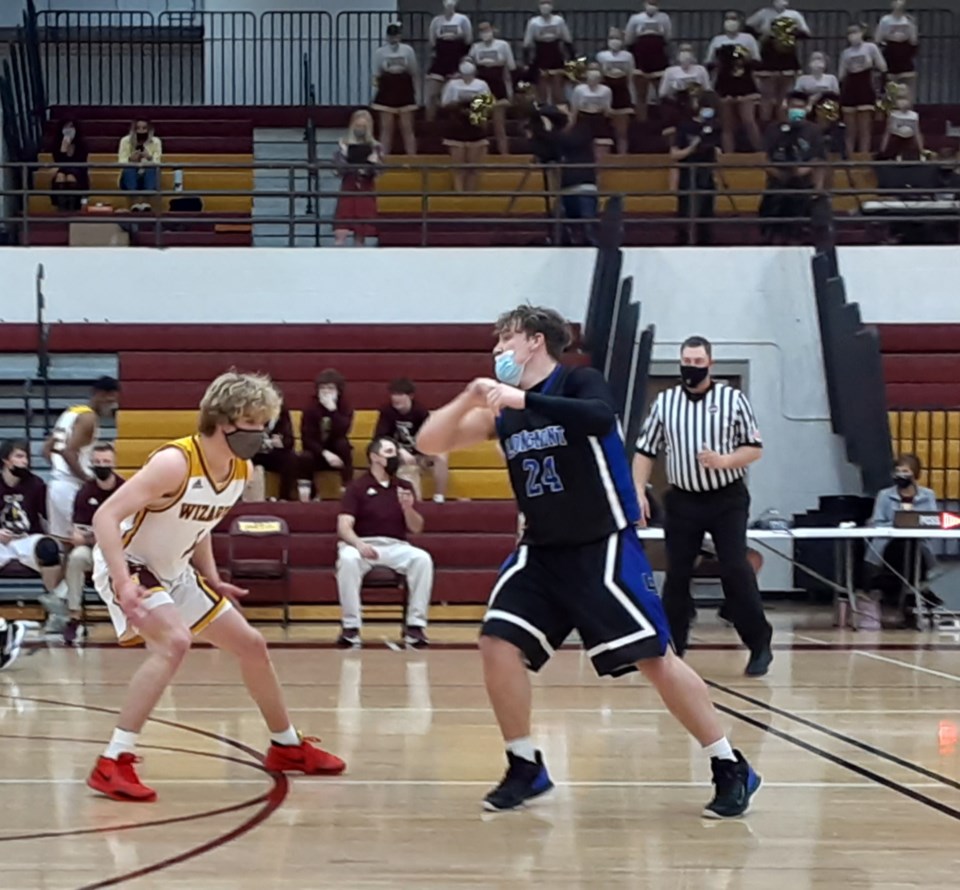 Longmont's Kale Derksen passes with the Wizards' cheer squad looking down from the upper level during the game at Windsor on Tuesday. By Matt Hagerman/ For The Leader
Patterson has emerged as the second-leading scorer for the Trojans this season but got the worst treatment from the 20 or so Windsor students permitted to cluster in a corner of the gym on Tuesday. The junior gunslinger on the gridiron has college football aspirations but is focused on the hardcourt at the moment, as well as complementing Kurjak, who scored a game-high 24 in the defeat.

“He’s an incredible teammate, incredible player and incredible leader,” Patterson said of Kurjak. “He really sets the tone for us every day in practice; every day for the games. He played receiver this year but missed one or two games because he was quarantined. He was a very good football player as well.”

As the gym emptied, Kloster’s roster filed out of the hallway in which they had gathered for the post-game huddle. But the coaches stayed behind and kept the Windsor custodian with the keys waiting for a while, plotting a familiar course in a year full of uncharted waters.

“With everything we’ve had to put these kids through and the way they are trying to grind it out, to be the team that was fortunate enough to come out on top of what I think is the best 4A league in the state, it says a lot,” Windsor Athletic Director Eric Johnson said.” I think coach Kloster and his program certainly is right there at the top of the state, historically.”

The postseason brackets are set to be released on Monday, with first-round play starting on Tuesday. The state tournament will be March 19-20, according to the Colorado High School Activities Association’s 2021 basketball bulletin. 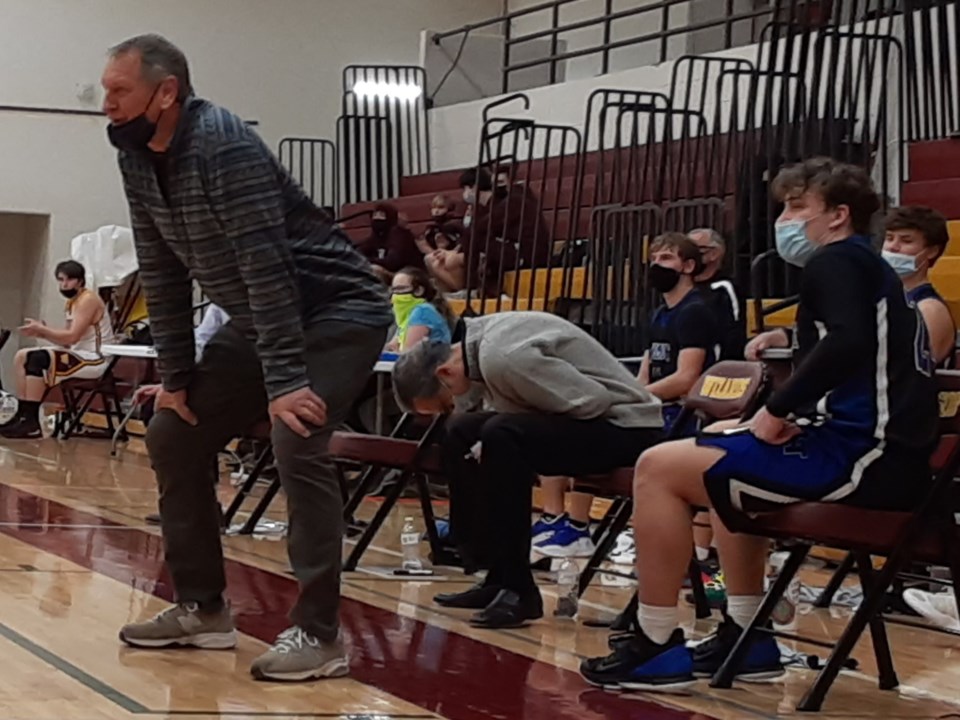 Longmont head coach Jeff Kloster and others react to a Trojans' mistake in the second half at Windsor on March 2, 2021. By Matt Hagerman/ For The Leader