Players will be issued four tickets each for contests with schools from another district, while they will be issued two each when facing another SVVSD team, according to an email sent Tuesday to families.
Feb 9, 2021 11:12 AM By: Julie Baxter 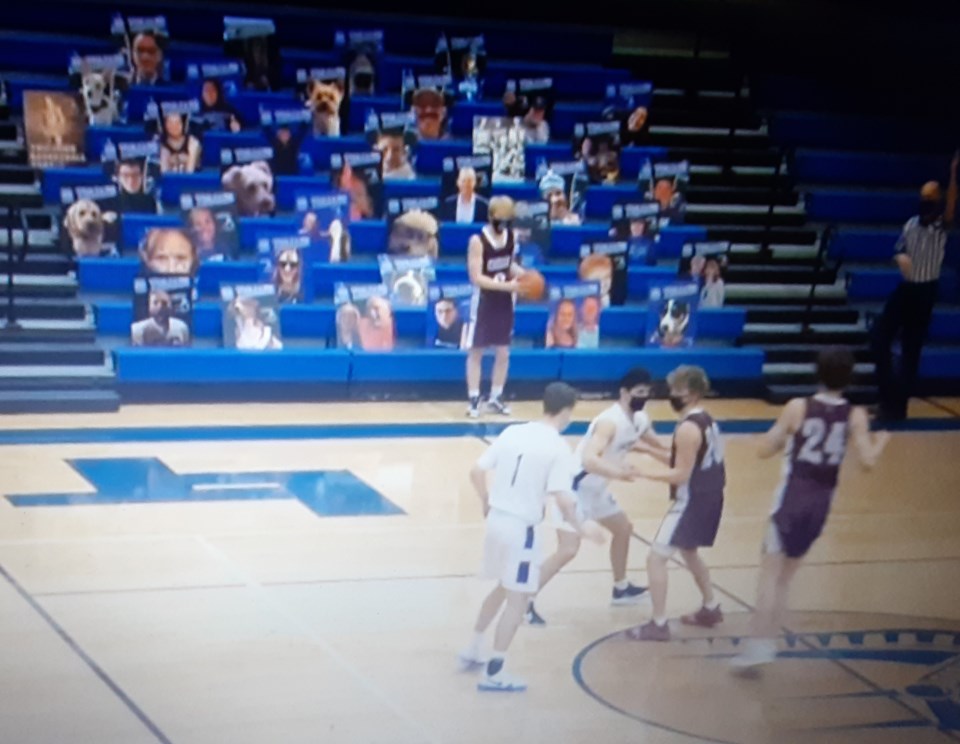 Silver Creek senior Karson Hills inbounds the ball with a backdrop of cardboard cutouts behind him during the Saturday, Feb. 6, 2021 game at Longmont.Screen capture from livestream broadcast

The state’s revamp of its color-coded COVID dial dashboard, and Boulder and Weld counties’ subsequent move to yellow on the dial is good news for local high school sports fans.

The move to yellow means a limited number of spectators are now allowed to attend games and competitions, Silver Creek High Athletic Director Patrick DeCamillis wrote in an email sent Tuesday to families.

“To ensure appropriate social distancing, for most games, each home-team athlete will be issued four tickets for spectators,” DeCamillis stated.

Players will be issued four tickets each for contests with schools from another district, while they will be issued two each when facing another SVVSD team, according to the email.

Schools will have designated seating areas for spectators that must be 25 feet from the court or field, which could limit which gyms can accommodate spectators, DeCamillis wrote in the email.

Spectators must use separate entrances and exits from players and coaches and cannot mingle with athletes before or after the game, according to the email.

Masks must be worn at all times while on district property, DeCamillis stated.

“While we anticipate the opportunity to allow spectators at most events, we may need to adjust our numbers based on venue capacity. The sports that will be impacted the most by venue capacity adjustments are our swimming and wrestling teams, as those venues do not provide as much opportunity for social distancing, and/or have multiple St. Vrain teams competing,” he wrote in the email.

In addition to girls swimming and wrestling, ice hockey, skiing, basketball and competitive spirit also are included in the Colorado High School Activities Association’s Season B, which in December received a variance to proceed from state health officials.

In the COVID-shortened season, basketball is limited to 14 games and state tournaments will be March 19 and 20.

Wrestling is limited to duals, tris and quads, with no multiple team events in advance of the regional competition that will be complete by March 6, according to the CHSAA bulletin. The state tournaments will be March 12 and 13.

Swimming teams are limited to 50 participants per meet and seven meets maximum in the regular season that wraps up March 6, according to the CHSAA bulletin. The state meet will be March 11-13.

The hockey season is limited to 13 games and wraps up on March 11. The CHSAA hockey bulletin does not list a date for state competition.

High school skiers will complete their championship by March 13, according to CHSAA.