The photos of  faces of athletic seasons past cover the halls surrounding Longmont High School’s Trojan Dome. A pennant celebrating a 1908 national football title hangs high in the gym above all the other championship banners.

Winning matters in midtown and no Longmont High team has exuded more success in recent years than the boys basketball squad. The Trojans won it all in 2018, just missed a title in 2019 with a 5-point championship game loss to Lewis-Palmer, and fell to Classical Academy in the 2020 Great 8 before the remainder of the tournament was canceled because of the coronavirus pandemic.

Among the familiar blue surroundings, Longmont’s season concluded Thursday night in the Class 4A state semifinals against No. 3 Montrose (18-0, 7-0). The undefeated Indians ended the No. 2 seed Trojans’ (13-4, 9-4) two-month scramble for the title in a 48-33 win.

With a 17-0 record entering the Final Four matchup, Montrose spent its entire season on its side of the Continental Divide and the Indians didn’t get to size themselves up against metro area schools. But the disciplined team full of juniors disrupted Longmont’s offensive rhythm and pulled away in the third quarter with some big buckets.

“I think we knew as a team that we didn’t have a good strength of schedule,” Montrose junior Ashden Oberg said. “We knew we needed to come together to be ready for these teams over here.”

In his final game for the Trojans, big senior Eddie Kurjak was held to just 10 points. The centerpiece of this season’s roster will go on to play at Division II Colorado Mesa University next year but had lots of tears to shed on his coaches’ shoulders after the defeat.

“Preseason, me personally, I was kind of iffy about how we were going to handle the season,” Kurjak said. “It was a different group I wasn’t used to playing with. But I thought our coaches helped a lot. I thought it took some leadership but we really put together a hell of a push and put together a pretty complete season.”

Kurjak was the only returning player who had significant minutes in 2020. He was proud of the way so many football players became basketball players in a COVID-19-shortened season that began in late January with a Kurjak buzzer-beater in Evergreen.

“Basketball never stops,” Kurjak said. “It’s a game you can take your mind off things with. I don’t want to say that you can build your life around it, but it’s just such an amazing opportunity that you have and it’s such a euphoric feeling always being able to play basketball.”

Before he becomes a college basketball player, Kurjak still has one more bar to clear. He will try to go for gold in the high jump when track and field season begins this spring.

“We know how good of a player he was,” said Longmont head coach Jeff Kloster. “He meant so much to us in so many ways, both on the offensive end by leading us with 18 points a game, leading rebounder in the conference, leading shot blocker. But the thing I’m most proud about, is how he became a great leader. His teammates really really looked up to him. They listened and they responded. I thought that was where his biggest growth was. He will be deeply missed.” 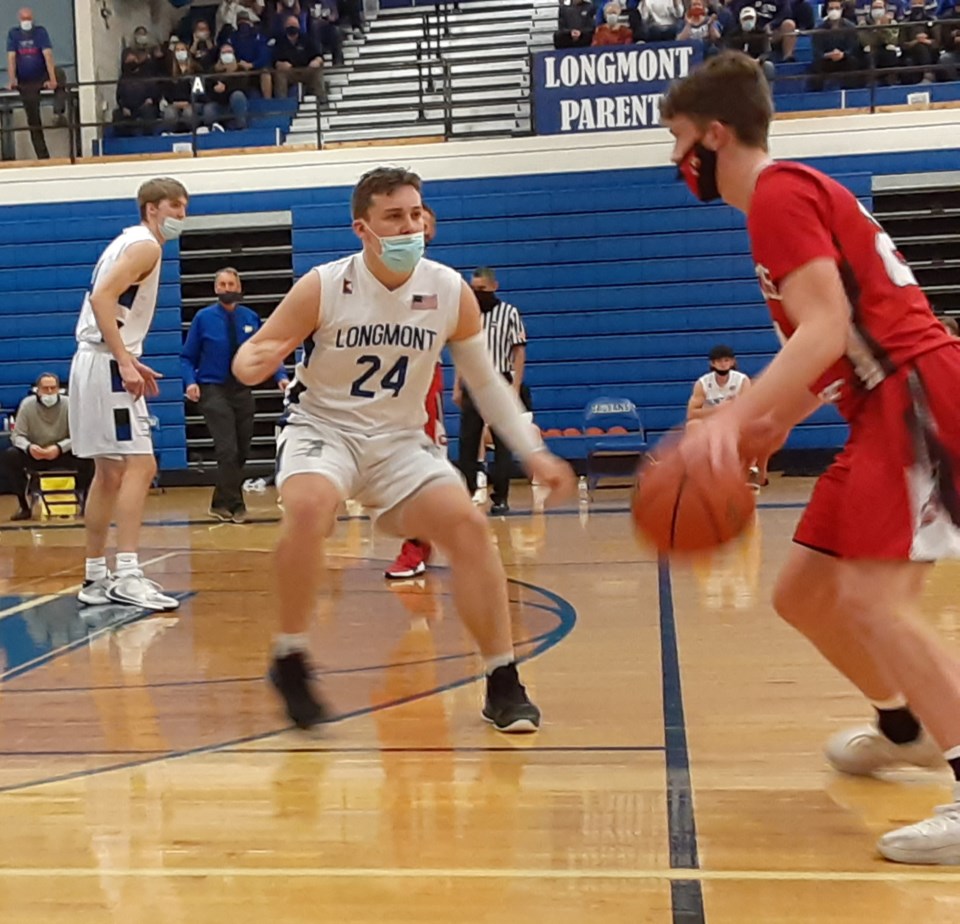 Longmont junior Kale Derksen guards a Montrose player in the Class 4A state semifinal game in Longmont on Thursday, March 18, 2021. . By Matt Hagerman / For The Leader
For Kloster, season No. 27 at the helm of the boys basketball ship is in the books, and what a tale it is.

“Our summers are always huge,” Kloster said. “It kind of puts us in a position of how we are going to build into our season. Not having that and then all of a sudden thinking that we were going to have a season before football and then it’s an about-face and football goes first. We went from Oct. 4 until the seventh of January without having any contact with them as a coach. Having to scramble and just do things on the fly made it a strange season. But I look back and our kids responded every day.

“I’m always going to be grateful for those kids,” the coach added. “We all were going through a tough time and it gave me a chance to enjoy something where I could have relationships while other people were stuck at home. That made things a little bit more normal for me.”

His boisterous son, Cade Kloster, is the loudest Trojans’ assistant coach because firing up teenagers is a young man’s game.

“He is the one that invigorates our program,” said the elder Kloster. “He really brings something more. We have a lot of older men on our staff. To have a 28-year-old who can relate to those young guys, it is really special. I am so proud of my son.”

Jeff Kloster’s Thursday postgame meeting took place in a classroom in which, from a glass case beside the door, a young assistant football coach by the same name smiles in a photo commemorating three straight undefeated championship seasons on the gridiron. The photo is from 1992, one year before Kloster’s first season as the basketball head coach.

“I thank the good lord every day for putting me in a situation where I could coach at my alma mater,” Kloster said as he took his turn getting choked up. “I take it one year at a time and then I reevaluate with my wife. I don’t know if it’s another year or two years, three years, four years, five years; I don’t know. But I know the good lord will tell me when my time is up and maybe I pass the torch to Cade or someone else.”