The state tournament is Thursday through Saturday at Southwest Motors Events Center in Pueblo. The girls championship wraps up on Thursday, and the Class 4A boys title matches are slated for Saturday.
Mar 10, 2021 11:00 AM By: Matt Hagerman 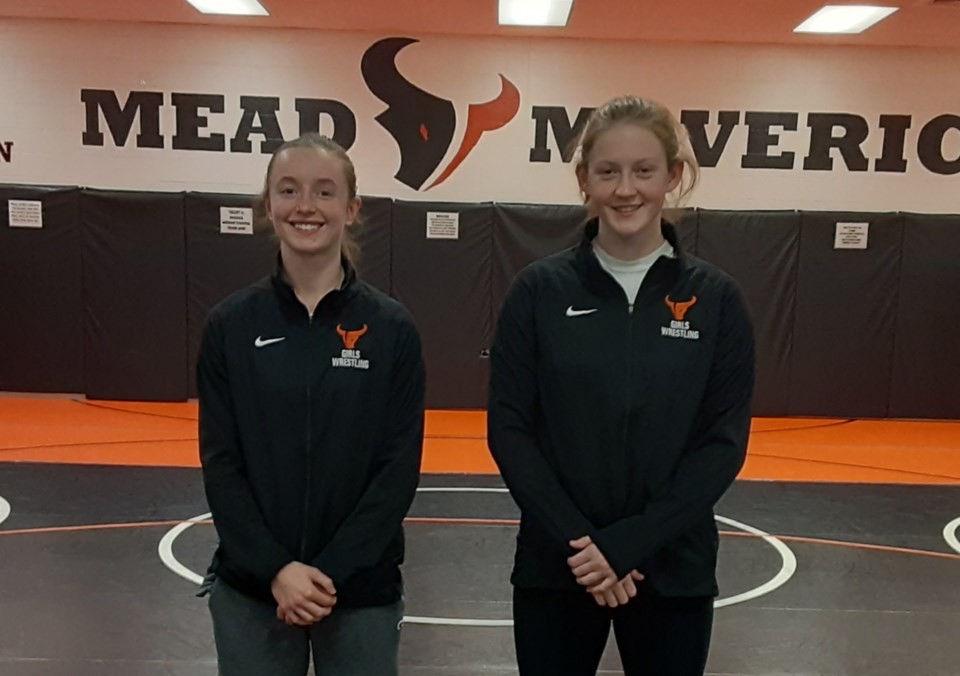 Mead sophomore Frances Hudson, left, and Longmont junior Jenna Joseph both qualified for the girls wrestling state finals Thursday in Pueblo. Undefeated Joseph wrestles for Mead, which has the only girls team in St. Vrain Valley School District.Matt Hagerman / For The Leader

Jenna Joseph said she once had seven matches in a day as a younger wrestler. But the three she needs to win Thursday at the Class 4A Colorado state championships in Pueblo, have higher stakes. After placing sixth at state in 2020, three more wins will mean the undefeated junior from Longmont High is the best wrestler in the 161 pound weight class in 2021.

“The past two years of high school experience did help me figure out that it’s OK, you don’t have to be anxious about every single match you walk into,” Joseph said. “No season is ever identical to another, but going through what I did last year, definitely is going to translate into what’s going to happen on Thursday.”

“I’m wrestling the girl that’s a weight class above me and the one that’s two weight classes below me,” Joseph said Tuesday during practice next to the Mavericks basketball court, where noisy opening round playoff action was underway. “Just so I can get different resistance, different weights, a different perspective on what’s happening. It’s just a lot of hard drilling.”

Joseph will be joined in Pueblo by her teammate Frances Hudson, who reached the state finals in the 105-pound weight class.

“I was really surprised that I made it to state,” Hudson said. “I just wanted to get a base in wrestling again and have some fun. I’m just going to go out there and give it my all and we’ll see what happens.”

The smaller sophomore has mixed martial arts aspirations but sometimes struggles to find competitors her size. She was one of only seven wrestlers to compete in her class last week at the regional finals.

“I’m really bad at basketball,” Hudson said. “I tried that for four years and didn’t get any better at it so I thought I might go back to this. I’ve been doing muay thai and kickboxing since seventh grade.”

In her first year as head coach at Mead, Rachel Salaz has been pleasantly surprised by a team with only six wrestlers among 10 possible weight classes. She expects the program to continue to grow.

“I’m beyond ecstatic for these girls,” Salaz said. “Our goal was never about winning. We talked to them primarily just about having fun and learning the sport of wrestling. It was such a short season this year because of COVID and all that. We just wanted to go out and have some fun and we actually won some duals.”

Salaz saw her team improve over the past two months, including Joseph, her talented junior captain who is the top seed heading into the eight-person finals of her class.

“Jenna just has to wrestle her matches like she knows how,” Salaz said. “She’s pretty level-headed. She doesn’t panic or anything like that in a match. So I don’t ever have to necessarily worry. I panic for her I think, a little more than anything. But that’s the nature of the sport.”

Skyline is taking three boys and Mead two to the Class 4A state finals Saturday in Pueblo.

On each end of the spectrum, Calvin Mendoza (106 pounds) and Oscar Aranday (285) will represent Skyline. Mendoza is 16-2; Aranday is 17-1. They will be joined in the middle by senior Grayden Bridwell, a top rusher during the football season who notched a 17-2 record in the 152-pound class on the mat. He lost in the championship match at regionals but bounced back to win second and earn his second straight trip to the state finals.

Mead’s Jake Glade comes into the state finals 20-0 at 120 pounds. His fellow teammate and state qualifier Randy Guerra is 17-3 after finishing second at the regionals at 126 pounds.

The state tournament is Thursday through Saturday at Southwest Motors Events Center, a multipurpose arena at the Colorado State Fairgrounds in Pueblo. The girls championship wraps up on Thursday, and the Class 4A boys title matches are slated for Saturday. For a full  schedule, brackets and a link to watch the action live, click here.