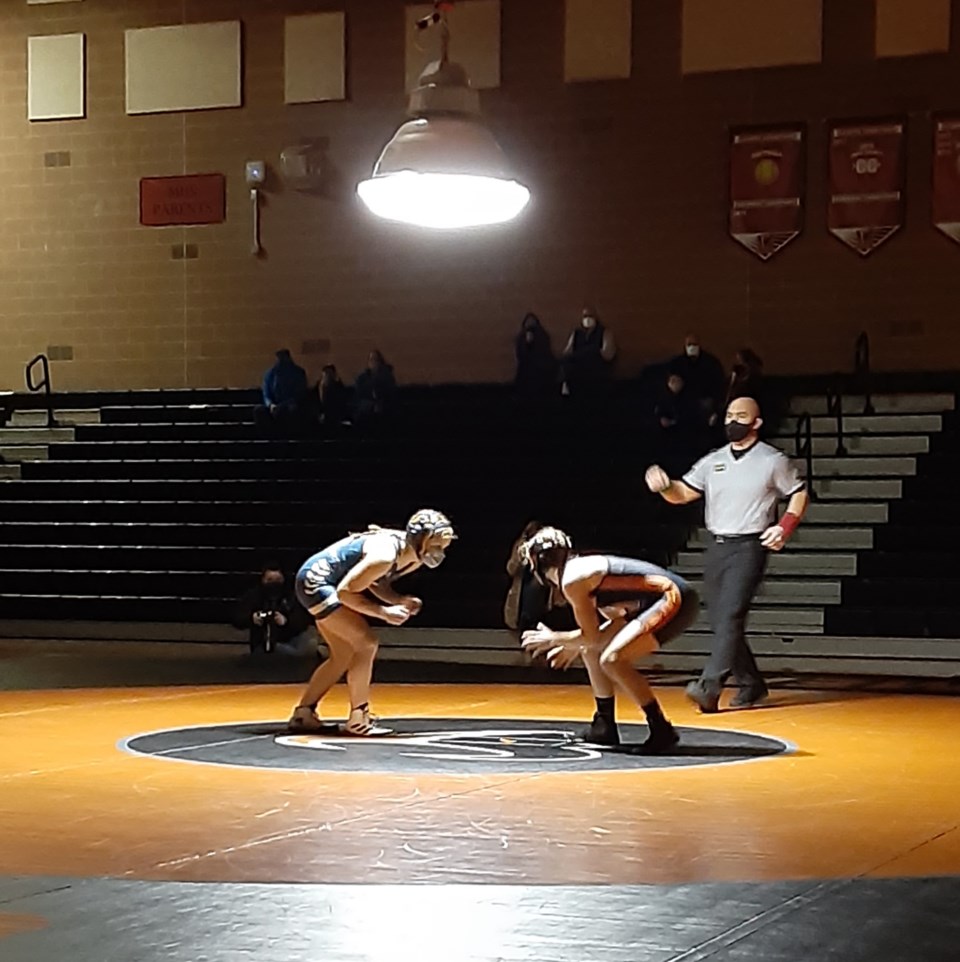 “I think that it’s really important for girls to be able to kind of explore their aggressive side just as much as guys,” Mead sophomore wrestler Kirsten Davis said after her victory on Tuesday. “It can really surprise some people and become icons for younger children and younger girls.”

Davis is one of the six student-athletes to make up the inaugural Mead girls wrestling team. After three road events to start their season, the first girls wrestling team in Saint Vrain Valley School District history hosted their first home dual on Tuesday night. 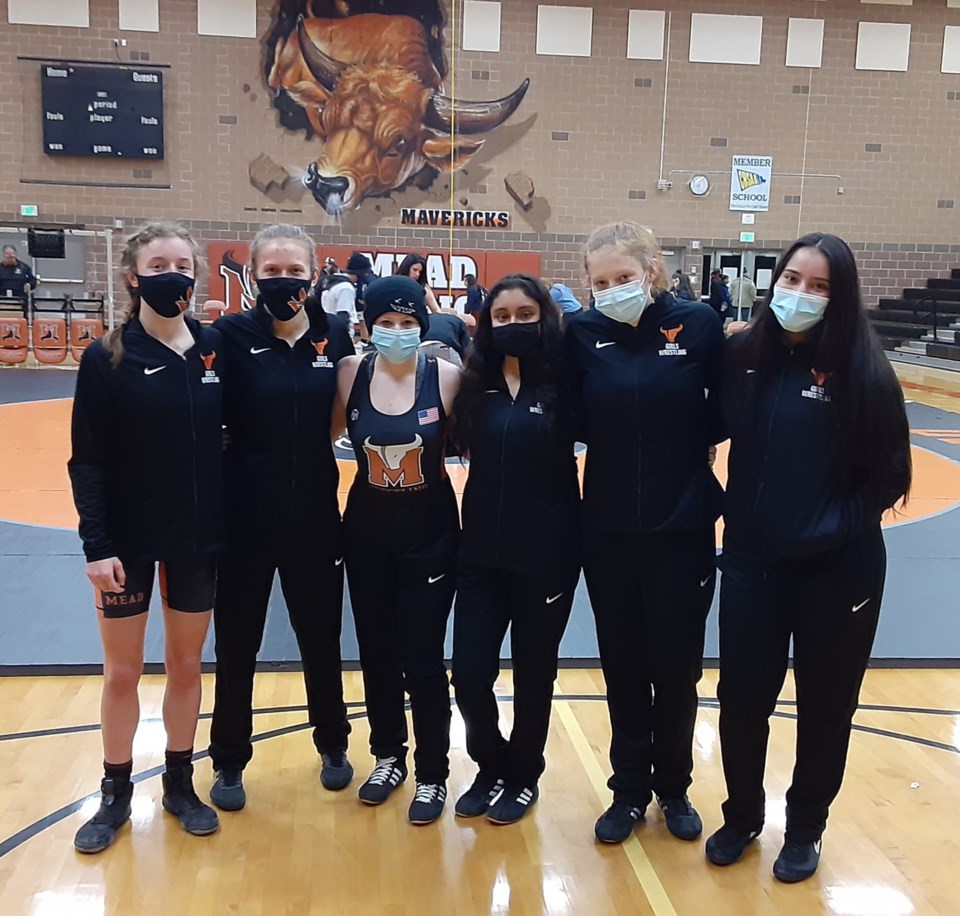 Only a dozen team family members were in attendance to watch the historic event after someone had to get on the school’s public address system to remind another staff member to unlock the front doors. Yet when the lights were shut off except for a giant spotlight in the middle of the arena, some real tension entered the room.

The Mavericks’ formidable opponent from Legacy High School boasted a roster twice their size and the No. 6 ranking in the state this week. With 10 total weight classes to be filled, the small Mead team often hands their opponent forfeits at each match.

Out of the four Mavericks who competed against Legacy last night, Davis was the only winner, pinning her opponent in the first round. Mead lost 48-12, but they are excited about the program they have begun. 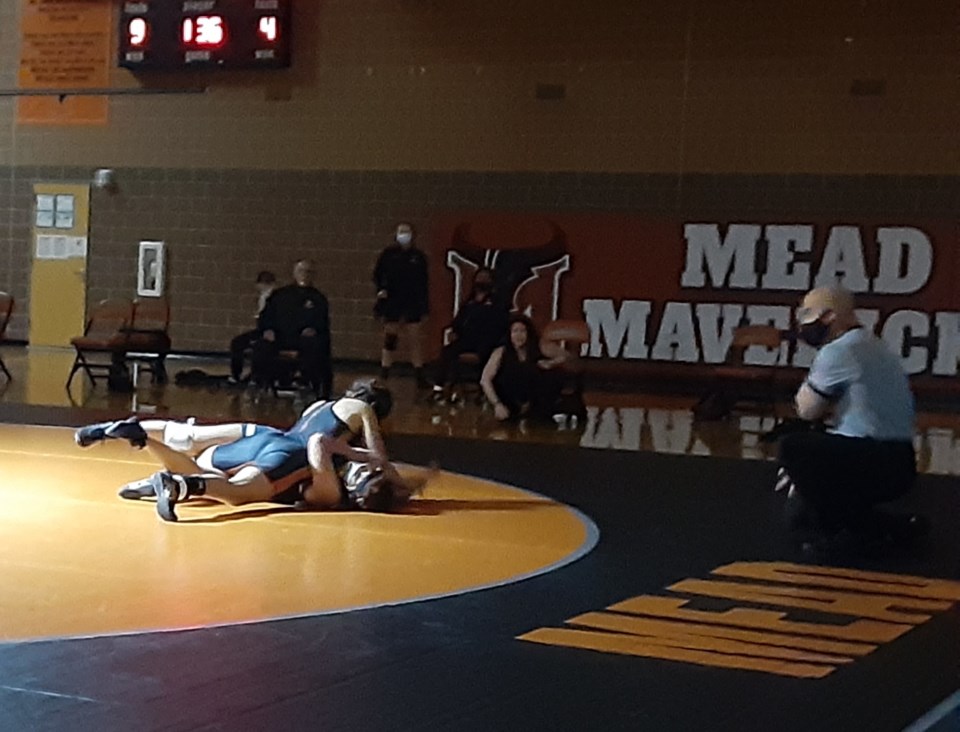 “It felt good, considering this is my first year wrestling,”  Davis, the novice, said. “I decided to do it this year and I love it so much. I think that it can get a lot bigger than just six people. The more girls know about this, the bigger it will get and I think in a few years we’ll have 15 to 20 people.”

According to Longmont Athletic Director Pete Scheck and Silver Creek wrestling coach Chris Blair, many boys and girls still opted out of this season, however. Some were concerned about their academics suffering because wrestlers must attend school entirely online during the season. Others decided it wasn’t worth the risk of possibly spreading or contracting a highly contagious disease on the mat.

“It’s difficult, but I mean, you’ve got to do what you’ve got to do at this point,” Longmont junior Jenna Joseph said regarding the masks that competitors are required to wear. “It does help with the conditioning because you’re forced to breathe through this. Wrestling without it is a blessing.”

Joseph placed sixth in the state finals tournament last year and hasn’t lost any matches this season. Ironically, Legacy’s large squad didn’t have an opponent to match up with the Mavericks best wrestler in her 161 pound weight-class on Tuesday, so she could only encourage her teammates from the sideline.

Joseph has been wrestling for six years and is one of two Longmont Trojans who have joined forces with girls from Mead to form the official SVVSD girls wrestling team.

“It’s strange,” she admitted. “When you were in high school, if you were to wear the opposing team’s colors and train for the opposing team it wouldn’t feel totally right. It’s the fact that I actually get to wrestle this season that’s making it all better.” 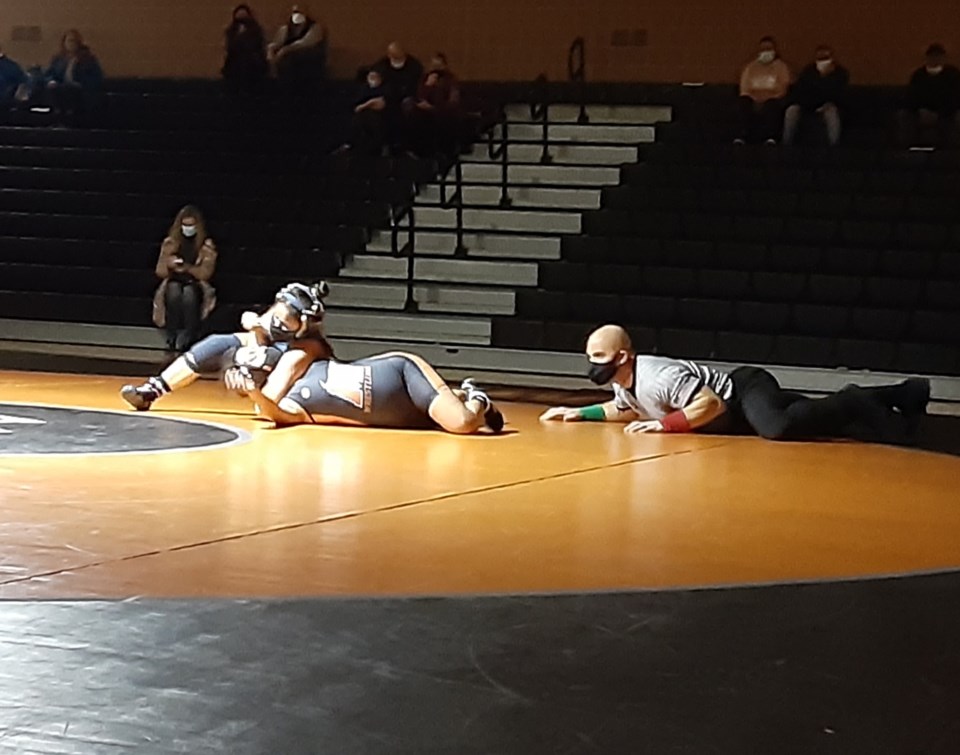 Mead junior Kassandra Reyes also made it to the state finals tournament last year and hopes to return in 2021. However, she was overwhelmed Tuesday night on her home mat by one of the best 118 pound wrestlers in the state. Legacy’s Cordey Mallo didn’t surrender a single point and left Reyes gasping for air in the quiet and dark gym before finally pinning her down in the closing seconds of their final round.

Reyes has moved up a weight class this season, from the 111 pound category in 2020.

“I did put myself in a challenging spot,” Reyes said. “But I’m really glad I did because it’s definitely brought a lot more determination and motivation to want to see how (much) better I can get. If you’ve never wrestled that kind of weight class, you’re a little intimidated. But challenging yourself is important.”

Mead head coach Rachel Salaz found out about her new position just one day after Boulder County decided to allow wrestling to take place last month. Yet, she was ready to take the reins with the help of her assistant coach, her father, Rich Salaz. The retired school principal brings more than 30 years of high school and club wrestling experience to Mead, and was as informative and loud as his daughter was throughout the action on Tuesday.

Rachel Salaz graduated from high school in 1994. Just one year later, girls were allowed to wrestle in Colorado for the first time in scholastic events. The coach said she would have competed as a student-athlete back then, if she had only been given an opportunity to try.

“Wrestling has been such a male-dominated sport for such a long time,” Joseph concluded. “If we have our own division we can become like the guys. We can prove ourselves on the mat.”