The Longmont Trojans’ final home game is scheduled for next week but with COVID-19 cases across Colorado and elsewhere on the rise, no game is guaranteed. With that in mind, Longmont chose to honor its graduating football players on Friday night before going on to defeat Greeley West 43-21. The Trojans improved to 2-2 with only two games left in the shortened 2020 schedule, while the Spartans dropped to 0-4.

"I've maybe gone to school like 12 days out of this whole year," senior linebacker Sam Ruffing said after Friday’s win. "It's the strangest year I've ever been in school. When we come out here and get to play, that's everything you want. That's all I can ask for. In a normal year this would be less than 40% of our season. It's flying by."

On defense, Ruffing was the leading tackler on Friday. But he also pulled in two long touchdown receptions from quarterback Keegan Patterson, who added the linebacker to his already loaded passing arsenal.

After throwing for 490 yards on a record-setting night against Skyline on Oct. 23, Patterson compiled another good outing on Friday. The junior completed 29 of 41 pass attempts for 306 yards and four touchdowns. He also rushed into the end zone for the other two scores and even snagged a bad snap on an extra-point attempt and ran it in for two more. Receiver Caleb Johnson had 15 receptions for 83 yards including several quick pitches in the backfield.

"Obviously I look at the numbers, but I do my best not to look at the numbers," Patterson said. "They set standards. We love seeing stats but the biggest thing we're concerned about is the wins and losses. We've had a couple of tough losses where we didn't play our best. So we're just focused on getting better from here." 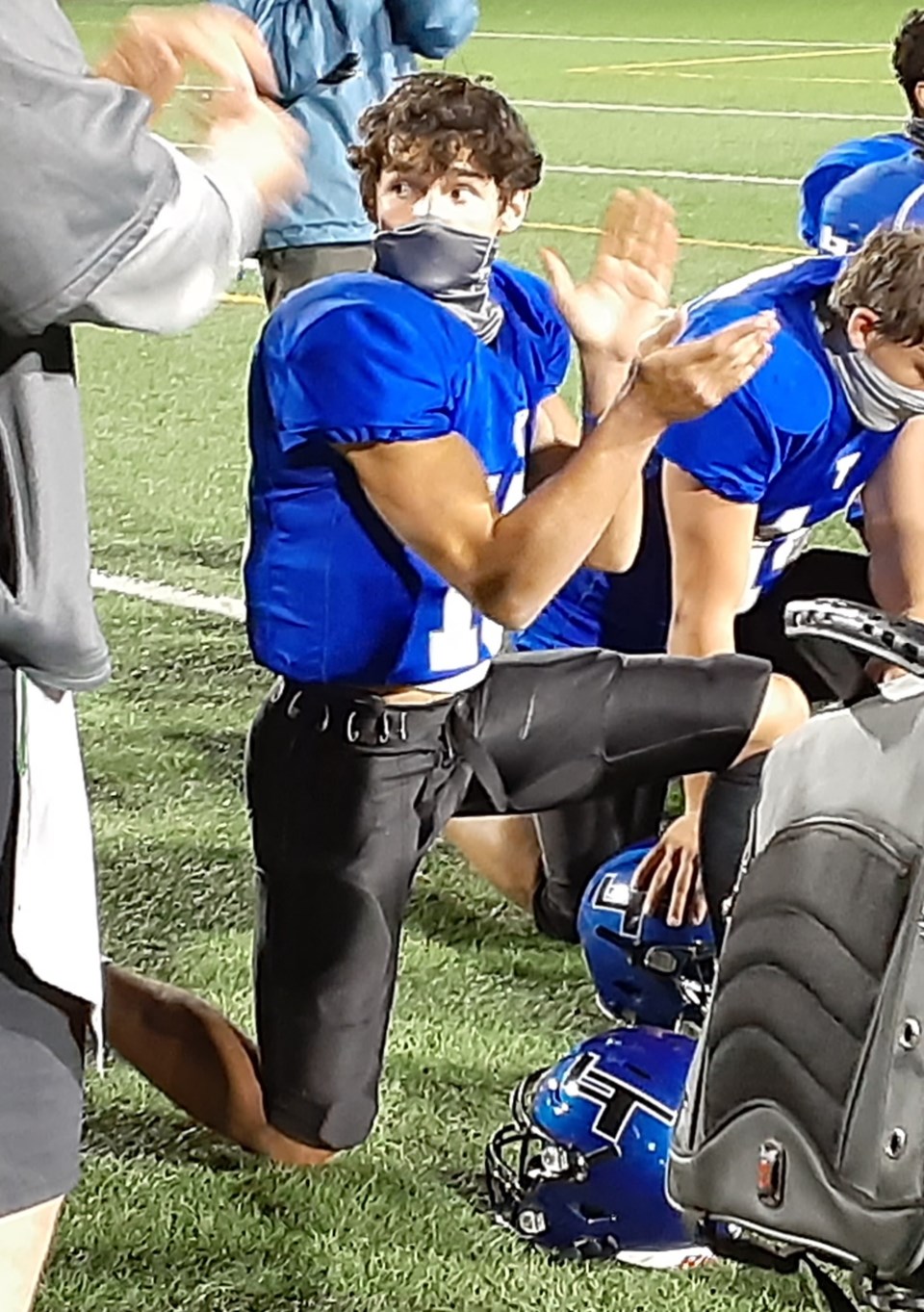 Longmont quarterback Keegan Patterson cheers for his team from the sideline on Friday, Oct. 30, 2020.(Photo by Matt Hagerman)
A video tribute to the seniors played on the big screen before the game and at halftime. After a brief pregame ceremony for the class of 2021, the Trojans went up 7-0 on their first three offensive plays. Greeley West responded with a touchdown-scoring drive in the second quarter before a Justice Lillie kickoff return to midfield and a Ruffing touchdown grab made it 14-7 Longmont at halftime.

Head coach Doug Johnson moved around to different huddles during the break, focusing on his defensive unit. In his 21st year at the helm, the boisterous Trojans’ commander intends to get whatever he can out of his 2020 team, despite the fact that two losses might be too many if Longmont wants to play in the postseason after an initial six-game dash. Only eight teams from each classification will get to compete for a state title.

"It's probably a good idea to look at what you have and not what you don't have and I'm going to continue to tell them that," Johnson said. "They have football and it wasn't too long ago that we didn't have it."

Another Justice Lillie kick return set up another Ruffing touchdown early in the third quarter. Then, the Spartans fumbled on their first play on offense and turned it over. On the Trojans’ next possession Jack Moll made a good catch in the corner of the end zone to increase the lead to 29-7. Later, down by 15, Greeley West was able to recover an onside kick. But Moll was ready to steal the ball right back and sealed the Longmont victory with an interception.

Senior night was special for 11 student-athletes who will soon graduate but also was a showcase for an impressive group of juniors who hope to play a full season in fall 2021. In addition to Patterson, Johnson, Lillie and Moll, other 11th graders like Kale Derksen and Kaden Hill also are scoring threats. Junior tight end Brendan Barcewski filled in at quarterback for Patterson on the final drive after the quarterback developed some swelling in his leg.

While his team celebrated beyond the end zone, Patterson sat alone getting wrapped by the trainer on the sidelines. On a night where the rustle of cheerleaders pom-poms and parents criticizing the referees were loud and clear, it was quiet again. 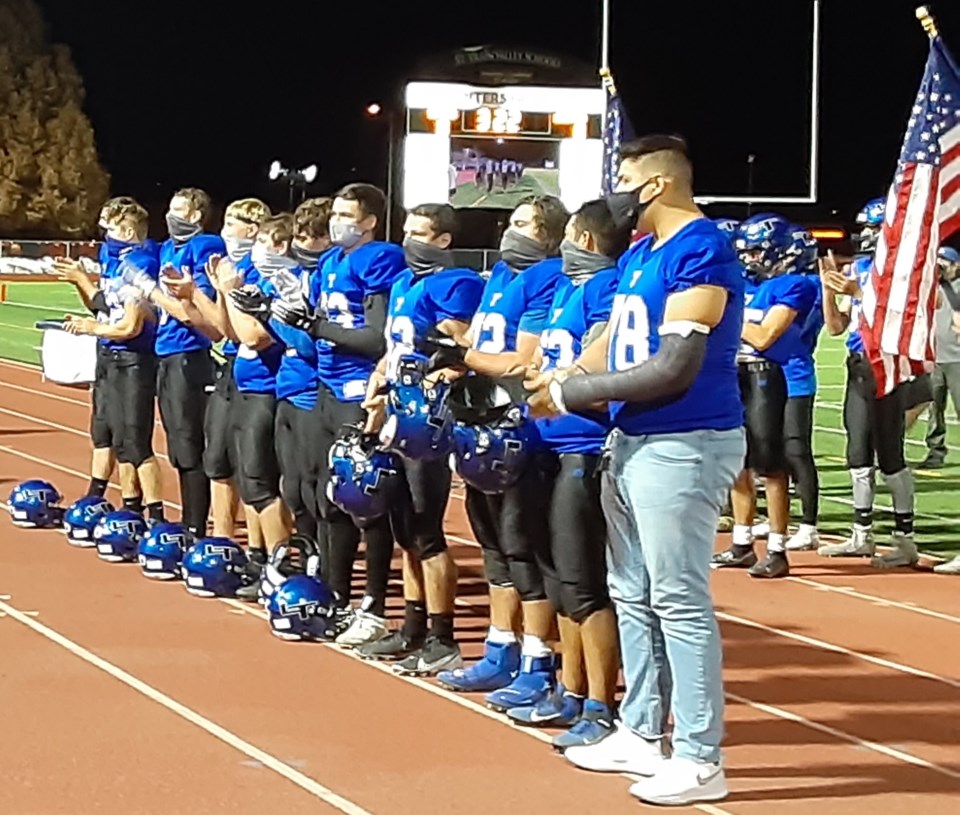 Class of 2021 football players were honored before Longmont took on Greeley West on Friday, Oct. 30, at Everly-Montgomery Field..(Photo by Matt Hagerman)
"They've gotten a lot taken away from them," Patterson said of this year’s seniors. "We're trying to do the best that we can to honor those guys. We just thank them because it's not fun being a senior with the world that we're living in and the football season that we have."

Skyline improved to 4-0 with a drubbing of 0-4 Greeley Central. The Falcons will host Monarch High School at 6 p.m. Friday before a possible battle for the conference crown with Loveland on Nov. 13.

Silver Creek has battled some superior opponents this season but was overwhelmed at Windsor on Friday. The Raptors will be seeking their first win of the season against Brighton (3-1) at Everly-Montgomery Field at 6 p.m. on Thursday.