The 5-1 Falcons have to wait until Sunday afternoon to find out if they can squeak into the eight-team Class 4A playoffs.
Matt Hagerman Nov 13, 2020 7:38 AM

Skyline’s Grayden Bridwell stood alone as the halftime clock wound down and then walked onto the empty illuminated field. He assumed his position on the kickoff return team before anyone else, as if it was his game alone to win or lose.

“My freshman year, I was just on kickoff,” Bridwell said. “Sophomore year, I barely started. I’ve grown a lot, I think. It just brings out the real me in everything and it just lets me be who I am on the field.”

The senior running back and his fellow blockers took on most of the heavy lifting in an epic 27-26 overtime loss at Loveland on Thursday night. In the finale of the COVID-shortened regular season, two undefeated teams with recent playoff success were fighting for their postseason lives. Now, the 5-1 Falcons have to wait until Sunday afternoon to find out if they can squeak into the eight-team Class 4A playoffs.

The battle for the 4A Northern 2 league title and a postseason berth had all the implications of a heavyweight title fight at the imposing Ray Paterson Stadium. In the 2018 state championship, Loveland embarrassed Skyline 62-14. The following year, the Falcons won a regular season rematch in Longmont, 20-15.

Thursday, a sparse and spread out crowd made as much noise as it could muster. Fathers screamed from the stands as if they were still wearing shoulder pads, while the Skyline moms more than made up for the absent cheerleading squad.

The Loveland dual-wildcat offense is spearheaded by sophomore quarterback Garrett Harstad and senior quarterback Zack Rakowsky. The two teamed up to lead Loveland to a 6-0 lead on its opening drive of the first quarter.

Skyline struck right back with a third-and-15 first down pass completion by senior quarterback Chase Silva and a forceful Bridwell run across midfield. Nick Peterson later pulled in a crucial fourth-and-10 pass on the sideline. When Bridwell crossed the goal line to tie the game at the start of the second quarter, the battle of rivals was on.

After running for a touchdown on his team’s first drive, Loveland’s Rakowsky threw a touchdown pass on its second. Trailing 12-7, Skyline incurred an unsportsmanlike penalty that turned third and one into third and 16 and it had to punt one play later. Loveland reached the red zone, but not the end zone and turned the ball over on downs in the waning seconds of the first half. 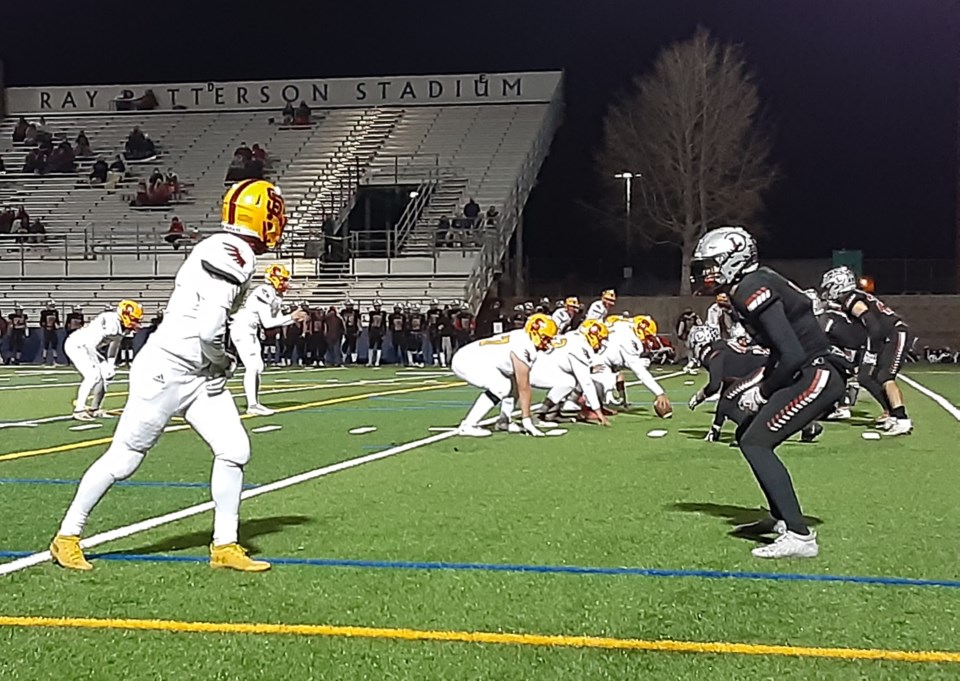 Skyline's offense, led by senior quarterback Chase Silva, lines up against Loveland on Thursday, Nov. 12, 2020.(Photo by Matt Hagerman)
At halftime, Falcons head coach Michael Silva (no relation to Chase) emphasized how important it would be to score at the start of the third quarter. His team responded with a tough drive that culminated in a soaring touchdown grab pulled in by sophomore Logan Miller. Skyline led 14-12.

Loveland was forced into a three-and-out possession that ended with a Bridwell takedown on defense. But all the momentum the Falcons had gained soon dissipated. Four debatable penalties over a handful of Skyline plays culminated in a Loveland interception returned to the Falcons 13-yard line. After Loveland scored a touchdown, it had its own issues with penalties. Loveland then converted a 2-point attempt from 17 yards out and led 20-14 as the fourth quarter arrived. Those 2 points would prove to be crucial.

The next drive was all Bridwell, except for a Silva first down run off of a fake handoff. When Bridwell later reached the end zone he had to pause and stay on his knees before he had the energy to celebrate. But Loveland blocked the extra point kick that followed and in a fall like no other, the score was fittingly, 20-20.

Late in the fourth, both teams fell short on fourth down attempts near the end zone and the cold nailbiter headed to overtime. In the extra frame, Silva found Peterson open in the corner of the end zone on fourth down. Skyline scored but failed to convert a two-point attempt that followed.

With the Falcons on top, 26-20, the lead had now changed hands five times.

But Loveland had an answer when it took its turn from the 10-yard line and quickly scored. Moments later, the extra-point kick sailed through the uprights and a point was the difference between exaltation and heartache.

Loveland is one of four 4A teams that have had a perfect season as of today, so Skyline will likely compete among several one-loss teams trying to fill four remaining postseason spots.

“If you’ve watched our games, it’s easy to see,” said coach Silva. “These boys play their butts off. There’s a lot of variables that could have real easily won this football game but Loveland played their tails off, too. There’s nothing that says they’re a better team than us. We are one of the best eight teams, I think we’re one of the best five. When you see that tournament come out, I think every team could beat every team on a given night.”

The Falcons have the option of playing one more regular season game if they aren’t one of the lucky eight who will compete for a state title. But despite finishing among the top rushers in the state, Bridwell says there is no way his team would want any part of that.

“It’s just sad to play another game knowing that we’re not in it,” Bridwell said. “We don’t really want to play a stupid game that we shouldn’t be playing. We know we would be a playoff team if there was a regular season.” 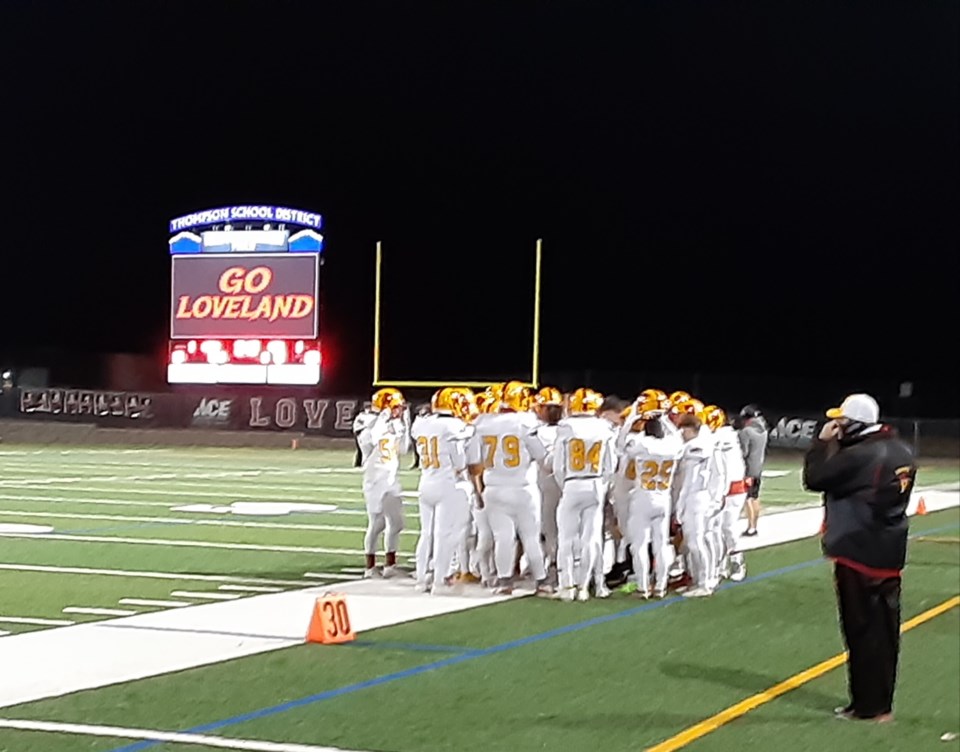