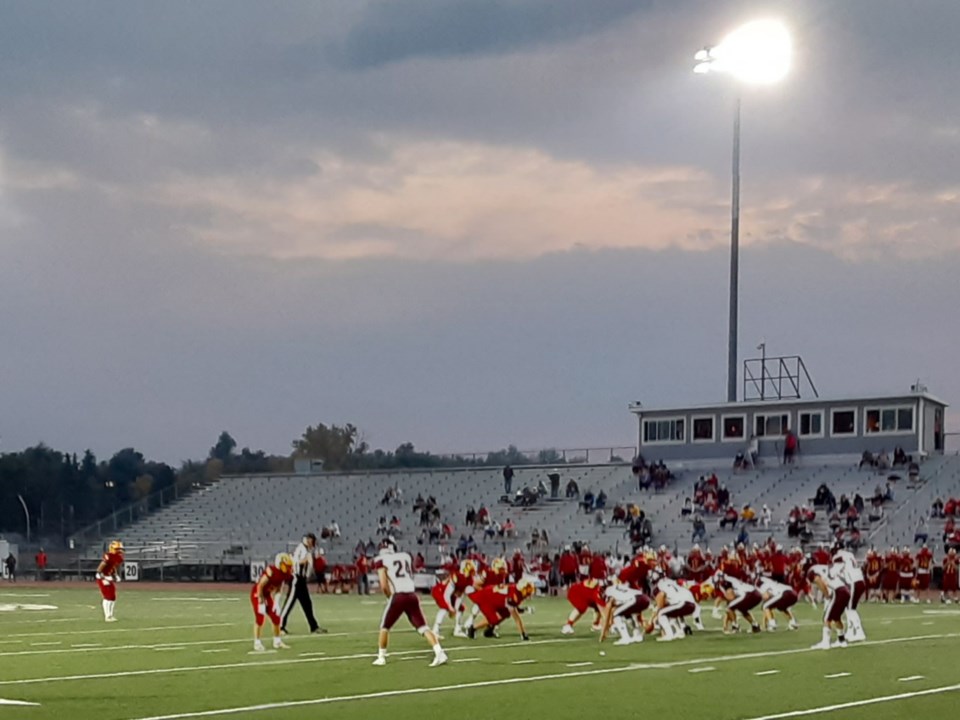 The season opener between Silver Creek and Skyline on Oct. 9 in Longmont was played before less than 150 spectators due to COVID-19 restrictions. (Photo by Matt Hagerman)

Skyline improved to 5-0 on Friday with their 35-21 win over Monarch. But as well as they have played this season, their biggest test has now arrived. Skyline travels up Highway 287 on Thursday to play 5-0 Loveland at 6:30 p.m. The winner captures the 4A Northern League 2 title and earns a trip to the postseason. The loser is guaranteed nothing.

The Falcons were sluggish early in the game and trailed 7-0 in the second quarter. But they came alive to quickly score 21 points before halftime. Receiver Nick Peterson weaved through three potential tacklers on a touchdown reception and quarterback Chase Silva later found Demitrio Martinez in the end zone. After Graydon Bridwell returned a punt for a 69-yard touchdown, Skyline was back in control, 21-7.

The Coyotes put together a good drive behind their vaunted running back, Cole Carlucci, and trailed 21-14 at halftime.

In between nice catches by sophomore Logan Miller, Bridwell took off on a 48-yard scamper in the third quarter. They set up a Silva run for a touchdown to put Skyline up 28-14. Bridwell, Peterson and Silva all contributed to another touchdown-scoring drive in the fourth quarter to put the game on ice.

While Skyline has grown accustomed to putting up a ton of points this year, so have their upcoming opponents from Loveland. Skyline beat Loveland 20-15 in 2019, after the Falcons were annihilated by Loveland in the 2018 4A State Championship Game, 62-14.

Two explosive offenses collided at Everly-Montgomery Field on Friday night. Loveland and Longmont traded scores early, but Loveland pulled away in the second half to win 50-21. The Indians will now host Skyline on Thursday at 6:30 p.m. in a battle of unbeatens.

Longmont dropped to 2-3 and aren’t slated to play anyone next week. It remains to be seen if they will take on another opponent in an additional game that would be scheduled for the following week.

Once again Keegan Patterson was impressive. The junior Longmont quarterback completed 30 out of 48 pass attempts for 298 yards and ran for 62 more yards on 12 carries. But Loveland intercepted the ball three times and capitalized quickly on two of them.

Longmont led 15-13 in the second quarter before the Indians quickly scored twice to take a 27-15 lead into halftime.

The Trojans looked to tighten things up as the third quarter got underway. Patterson scrambled across midfield for a first down. A reception by his top receiver, junior Caleb Johnson, moved the chains again. Johnson finished the night with 14 catches for 160 yards but his team turned the ball over on downs and were not able to score on their opening second half drive.

Loveland took off after that and added three more touchdown scores in short order. The Indians have outscored their five 2020 opponents, 222-60. Skyline hasn’t been quite as dominant on defense but have racked up 229 points of their own in just five games.

Despite stellar season Skyline falls short of 4A playoffs; 3A Mead makes it in as a No. 5 seed
Nov 15, 2020 2:15 PM
Comments
We welcome your feedback and encourage you to share your thoughts. We ask that you be respectful of others and their points of view, refrain from personal attacks and stay on topic. To learn about our commenting policies and how we moderate, please read our Community Guidelines.