Both teams exchanged long touchdown runs early in the ballgame before the Falcons took off.
Oct 24, 2020 12:30 PM By: Matt Hagerman 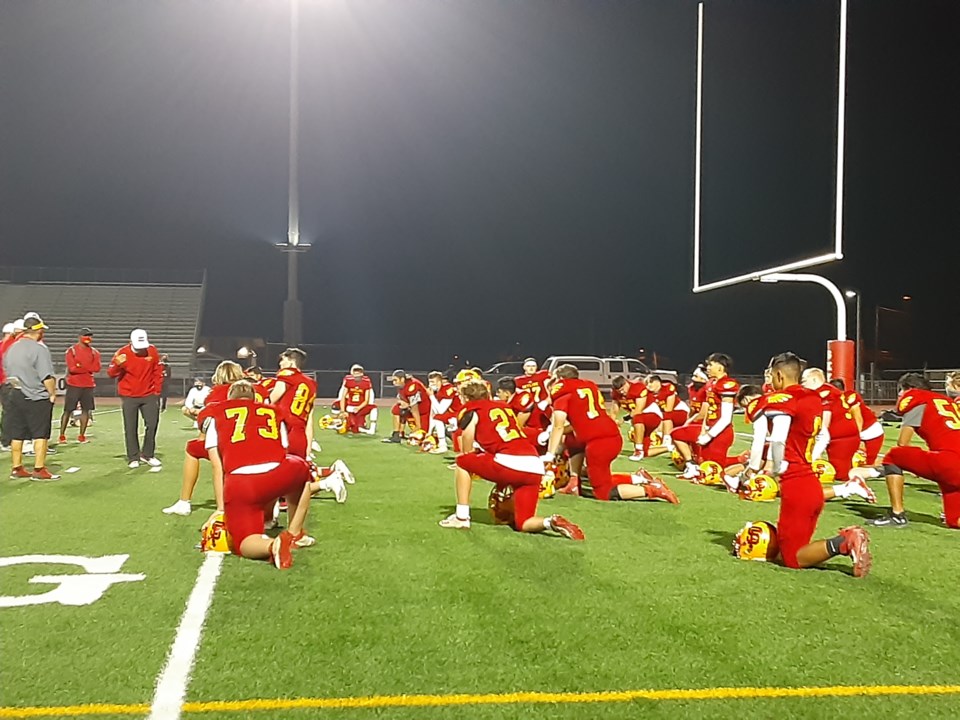 The battle of Longmont produced 89 points and almost 20 Skyline penalties as the Falcons’ sideline grew increasingly upset with both the referees and themselves. Yet during a cold night in midtown the yellow flags on the field were the only thing slowing Skyline down in a triumphant 51-38 shootout.

Skyline moved to 3-0 at the midpoint of the short 2020 regular season. Longmont fell to 1-2 despite another impressive performance by their junior gunslinger, Keegan Patterson. He found four different receivers for four touchdown passes, ran for another in the loss and has amassed almost 1,200 yards in the air in just three games.

Both teams exchanged long touchdown runs early in the ballgame before the Falcons took off. A big run by Grayden Bridwell was followed by a touchdown pass to Nick Peterson. Silva later followed his big blockers for another score and Skyline led 19-6 after one quarter.

Sophomore Logan Miller had to battle his own teammate for the ball before he pulled in a 55-yard bomb from Silva in the second quarter. Miller later got a touchdown grab before a Silva 2-point run gave the Facons a 21-point lead.

Skyline was driving toward the Longmont end zone yet again, when a sudden Sam Ruffing sack on fourth down gave the Trojans new life. Two quick drives before and after halftime narrowed the Falcons’ lead to 27-18 in the third quarter.

Facing fourth down and four yards to go at the Skyline 15, Longmont was given back-to-back gifts when the Falcons jumped offside. The Trojans later scored and climbed to within two, 27-25, after three quarters.

But as the final frame approached, Skyline senior Grayden Bridwell had had enough. After a short crucial gain on third and three, Bridwell followed it up with a long run into the night. By the time someone caught him, he had reached the Longmont 10. Soon the Falcons were up 35-25 early in the fourth. Bridwell managed to amass 37 carries and run for 384 yards on Friday.

Yet the Trojans fought on and the two scoring machines added two more touchdowns apiece before time expired. Trailing 43-38 with under four minutes left, Longmont opted to kick the ball away rather than try a risky onside attempt. They paid the final price when a 53-yard touchdown run by Silva finally put the matter to bed.

Before the Falcons and Trojans took center stage on Friday, the other high school vying for respect in Longmont hosted Broomfield at Everly-Montgomery Stadium. Silver Creek hasn’t beaten Longmont or Skyline since rejoining the 4A ranks in 2018 and fell to 0-3 in 2020 after a one-sided loss to Broomfield (3-0)

Broomfield takes on winless Heritage this Friday at 7:00 p.m. Silver Creek travels to Windsor (3-0) at the same time. Windsor gave Erie (2-1) their first loss of the season, 38-32 on Friday in double-overtime.

Despite stellar season Skyline falls short of 4A playoffs; 3A Mead makes it in as a No. 5 seed
Nov 15, 2020 2:15 PM
Comments
We welcome your feedback and encourage you to share your thoughts. We ask that you be respectful of others and their points of view, refrain from personal attacks and stay on topic. To learn about our commenting policies and how we moderate, please read our Community Guidelines.