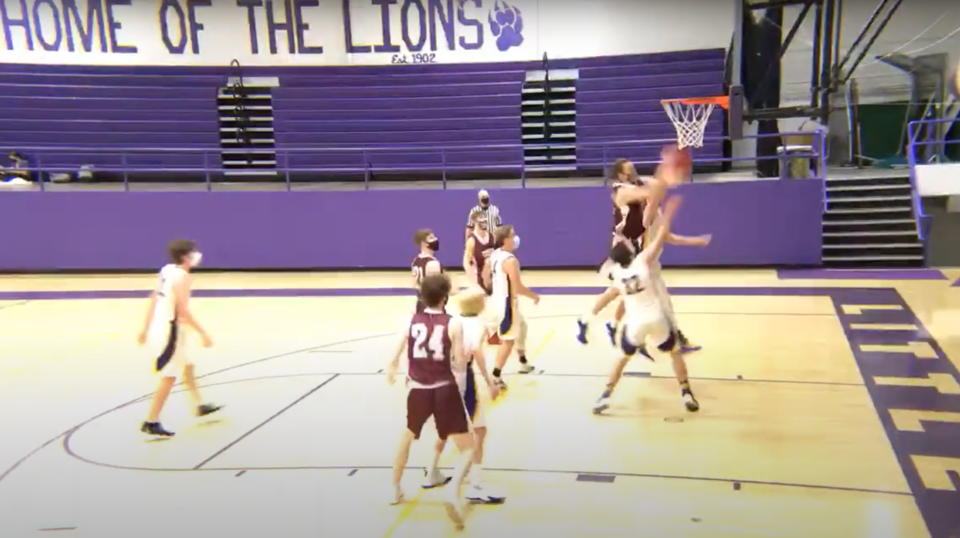 Longmont center Eddie Kurjak stands tall among his teammates. The 6' 9" senior and second leading scorer from last season is the only varsity player on this year's Trojans team who played significant minutes last year.

So it only made sense that he took the last shot on Wednesday night in Evergreen and it fell through the hoop just before the final buzzer sounded. A narrow 33-32 victory over a fellow 4A top 10 school was an exciting way to start the COVID shortened season. It was also a chance to forget about pandemic life for a moment as masked teammates briefly mobbed their big man in an empty gym up in the mountains.

Key football players from Longmont and Loveland make up a part of their basketball rosters as well. The Trojans were humbled on the gridiron by Loveland 50-21 back on Nov. 6, but they got a bit of revenge on Friday when they ran away with a 68-42 win on Longmont’s basketball court. Although, when Loveland returned to their school last night, they were free to admire their 2020 4A football state championship trophy.

The lady Trojans struggled to score points early but rallied in the second half of their games at Evergreen and against Loveland this week. They lost both contests but battled to the end.

Friday in Longmont, the Trojans trailed by nine at halftime but responded with a strong third quarter. Early in the fourth, a Christine D’epagnier free throw gave Longmont a 25-24 advantage. The lead changed hands five more times after that but in the end Loveland walked away victorious, 40-35.

Mead could use a break. Their football team was primed for a state championship run before a positive COVID-19 case on their team brought a sudden end to their season last November. Last year, the boys basketball team was hours away from playing in the state semifinals before the coronavirus shut down live sports around the world.

The Mavericks began to turn the page on Friday night when they traveled to Thorton to take on 5A Horizon. The game was knotted at 24 before Mead went on a 12-0 run and took control. Their exciting opener was close throughout but the Mavericks never trailed in their 72-67 victory.

Mead junior James Shiers was 9 of 13 from the field and scored 20 points. Sophomore Nick Basson had 19 points including three 3-pointers.

The Mead girls lost their opener on Tuesday at ThunderRidge 48-45. Sophomore Kyra Haan led the Mavericks with 11 points while junior Jackie Stephenson had 10. Mead was ranked number 14 in the Colorado High School Activities Association preseason poll.

The Raptors are off and running in 2021 with two impressive road wins. After taking down 5A Prairie View on Tuesday 78-62, they held off Littleton in a more defensive 52-35 win on Friday. In the opener, senior Karson Wells had no problem drawing fouls despite his 5’11” frame. He was 9 of 12 from the free throw line against Prairie View and led the team with 22 points overall.

Silver Creek faces off with Longmont one week from today at 4:30 p.m. on the Trojan’s home court.

The Lady Raptors had a wild week. After pounding Adams City 45-13 on Monday, they took a 66-22 beating from Monarch on Wednesday. Junior Mackenzie Larson led Silver Creek with 18 points in their opening night victory. Senior Marissa Bartels added 12.

The Falcons rebounded from an opening night 42-34 home court loss to Prairie View by beating Northfield 70-41 on the road Wednesday. Adrian Compian and Nick Peterson each scored 16 points in the victory. Skyline hosts Severance this Wednesday before they begin league play against Erie next Saturday.

The Falcons opened the season at Northfield but couldn’t match the boys in a 47-36 loss on Wednesday. Junior Charlie Nebb led all scorers with eight points including two 3-pointers.