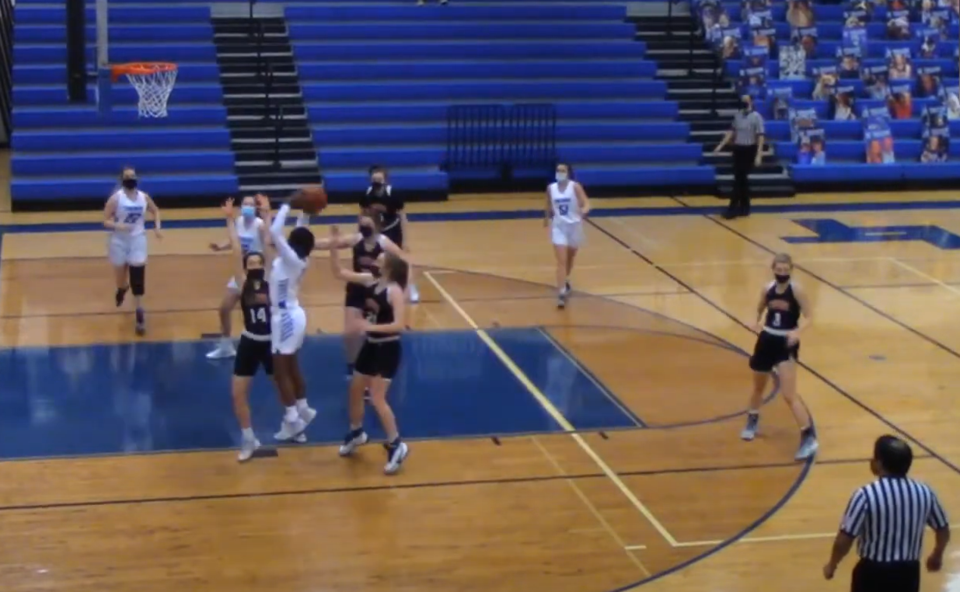 Longmont (9-1) and Windsor (9-1) will battle on the Wizards home court on Tuesday at 7:00 p.m. to decide the champion of the Northern League. The winner receives an automatic berth into the playoffs and perhaps the top overall seed in the Colorado 4A tournament.

The Trojans final warm-up before the big game was a trip to Skyline in east Longmont on Wednesday. The Falcons have won a lot of games over the past two seasons but have struggled with an undersized roster in 2021. Their best player, Hayden Robison, went down with a torn ACL before the season began and Skyline is only 3-8 this season.

Yet overall records mean little in many rivalry games and the Falcons burst out of the gate to take an early lead. Longmont responded and big Eddie Kurjak was once again the leading scorer with 17 points in a low-scoring 42-36 win. Adrian Compian led Skyline with 13 points.

Skyline responded last night by beating Greeley West 56-43 at home. Meanwhile, Longmont’s game was cancelled after their opponents from Erie were forced to quarantine due to a potential case of COVID-19.

The two girls teams were scheduled to play on Wednesday but Skyline was also forced to quarantine this past week due to coronavirus concerns. The Lady Falcons have not played since Feb. 17 but hope to return to action on Tuesday at Centaurus.

Longmont matched up with the Jefferson Academy in Broomfield on Tuesday and won 50-37 in a game scheduled at the last minute. The Lady Trojans lost to Erie 87-49 last night to fall to 3-7 overall. They will finish out their season with three games in four days beginning at Windsor on Tuesday.

Following back-to-back losses to Longmont and Windsor, Mead was upset on their home court last night by Holy Family 68-57. The once undefeated Mavericks are now 6-3 and are done with conference opponents this season. The best they can hope for in the Northern League will be a tie for third-place.

Mead hopes to improve their postseason resume with four home non-conference games on the schedule this week, beginning with Summit at 6:00 p.m. on Monday.

The Mavericks (5-2 overall) will travel to Erie (8-3) on Tuesday to decide third place in the Northern League behind top ranked Holy Family and Windsor. Mead lost to Windsor on Wednesday 81-58. Mead sophomore Charlotte Brennan led them with 17 points in the losing effort.

While the storied program at Longmont High School often overshadows their crosstown rivals, Silver Creek has had a season to be proud of in 2021. At 7-3 overall, the Raptors hope to make the 4A playoffs with a strong finish this week. After visiting Greeley Central on Tuesday, Silver Creek hosts Niwot on Thursday and travels to Roosevelt in Johnstown next Saturday.

The Raptors three losses have come at the hands of league rivals Longmont, Mead and Windsor in a 68-51 loss at Windsor last night. But those three teams have all been placed at the top of the 4A rankings this year meaning a fourth or fifth place finish in the Northern League is no small feat.

Needing to beat other teams battling for a spot in the postseason, Silver Creek toppled Erie 64-58 on Feb. 10. and hosted Holy Family this past Wednesday in a nail-biter. The very close game was tied 44-44 heading into the fourth quarter but Holy Family had no answer for Silver Creek’s Andrew Scott. The junior hit eight three-pointers and finished with 30 points overall in a crucial 64-61 win.

No results were available this week for the Silver Creek girls. Their record is currently 3-5 overall with two games remaining on their schedule. They are next scheduled to play March 2 at Greeley Central at 5:00 p.m.