The rink is divided and the practice schedule is shortened, but young players can still hit the ice at Roosevelt Park.
Dec 29, 2020 9:00 AM By: Matt Hagerman 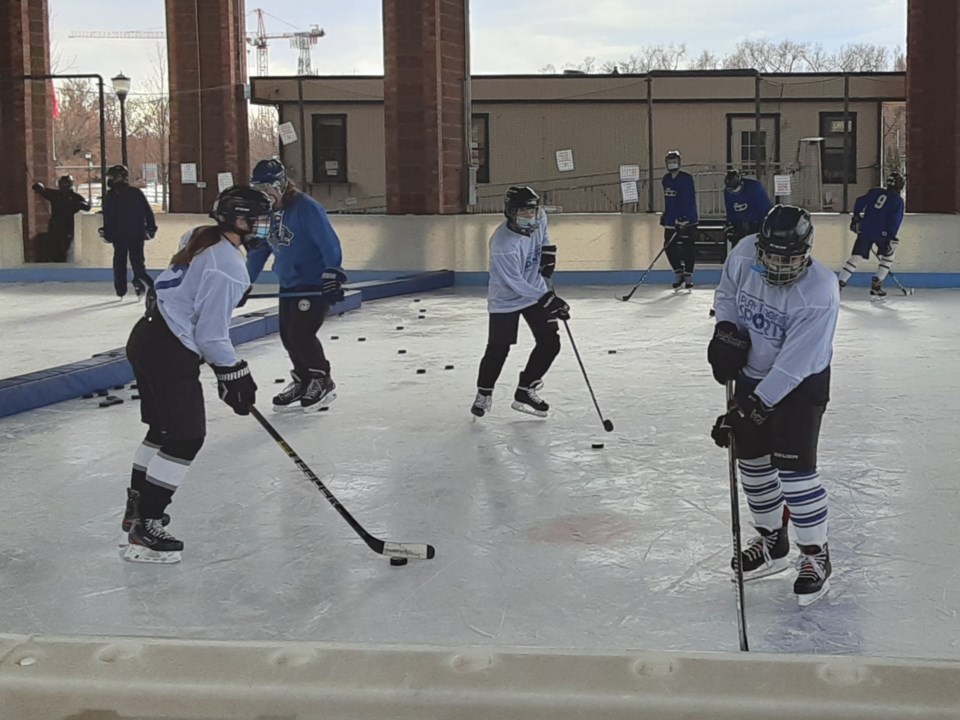 Every winter, the unmistakable sound of hockey echoes through the Longmont Ice Pavilion at Roosevelt Park. But no opponents will be coming to town during this season of COVID-19, leaving masked locals to compete against each other as often as three days a week. The rink is divided in half in an effort to maintain social distance.

Registration is still open for the Longmont USA Hockey youth program but practices are slated to conclude Jan. 31 instead of the typical mid-March end date. Jason Bain, the city’s hockey director, said it was a struggle to get the city to open the rink at all this year.

“Last year we could use the full sheet of ice. We could play games. We’d have referees that’d come in on Sundays,” Bain said. “This year, no games. Just skills and drills. Basically, we’re only allowed groups of 10, so it makes teaching the actual game a lot harder because we don’t have a full sheet of ice. Our program is big, so we have to split our group. It was the only way to save the program that was already registered. At least everybody’s outside having fun.” 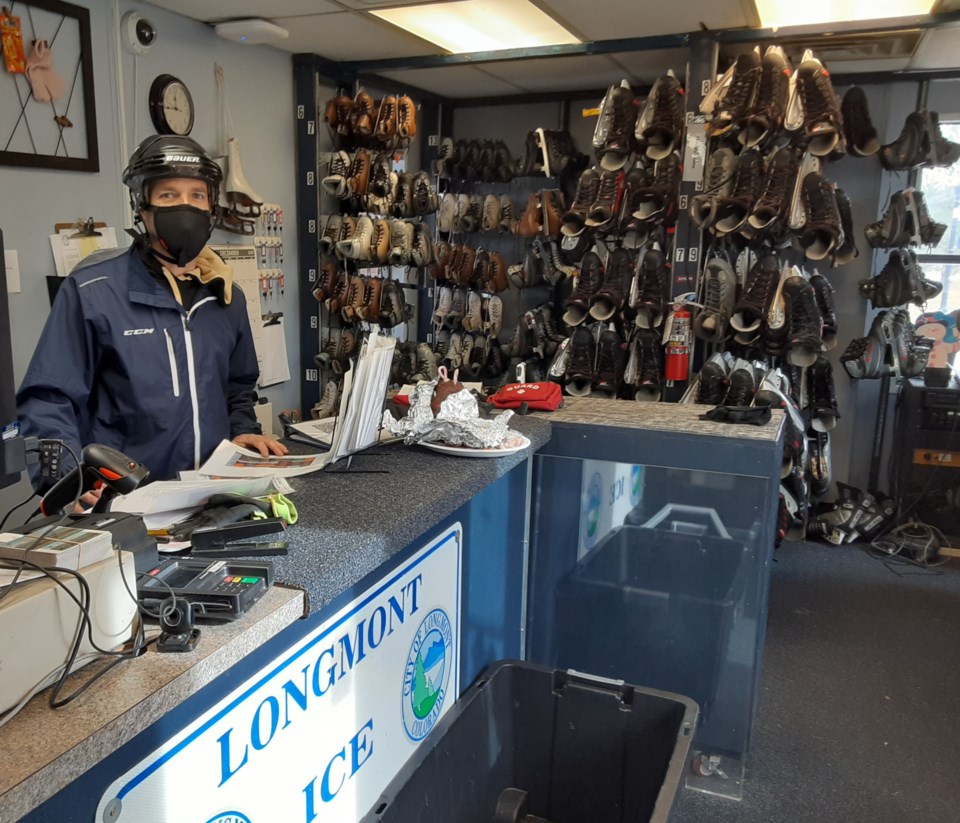 Jason Bain has directed the Longmont Youth Hockey Program for the past six years. By Matt Hagerman
On a recent Sunday morning the Bantam and Midget groups concluded the practice schedule after Mini-Mites as young as 5, Mites, Peewee and Squirts came and went. Among the oldest group was 15-year-old goalkeeper Ian Hopkins of Berthoud.

“Even though we have a lot of restrictions, it’s still open, which is really nice,” Hopkins said. “Jason really made it happen. He was really pushing for it.”

At some point, Hopkins opted for the big pads and blockers and keeping pucks out of the net instead of putting them in, although he admitted he might be tempted to try and score a goal this winter on the unusually small playing surface.

“I like it because I really get to see all the action on the ice from a whole different point of view,” Hopkins said. “It’s just a different experience than a player. It’s kind of hard to describe, but I just really like goalie.”

For players like Hopkins, the Longmont Youth Hockey Program is a step toward competitive high school hockey. No Longmont schools have a hockey team but St. Vrain Valley School District students are allowed to try out for the teams at Centaurus, Fort Collins, Monarch or Resurrection high schools.

“Our big move is to teach kids to love the game for the rest of their life,” Bain said. “Love the ice and love the game and get better and feel confident if they need to move on to a more competitive situation.”

About 40 high school-age teams, including two from Longmont, compete each spring in the High Plains Hockey League. But Longmont doesn’t have a full-size hockey rink so local teams play in Lafayette, Superior or Westminster. In 2019, voters rejected a proposed sales tax increase to fund a new aquatics center and ice hockey rink by almost a 2-to-1margin.

“There’s definitely a niche in hockey especially in Colorado but it is rapidly growing,” Bain said. “Our high school teams have almost doubled what they were 10 to 15 years ago. Our program hits about 100 just right here in Longmont. There’s definitely not as much awareness that our rink is here and that we have a hockey program.”

“It’s definitely no football, basketball or baseball as far as popularity goes,” added Bain. “But that’s what makes it special and that’s what makes us a family and not just a sport. We all do something weird and different. It’s something we all have in common and we make friends immediately.”

For more information on youth hockey, as well as an adult hockey skills class and drop-in hockey at the Ice Pavilion, click here.

For more information about open skating, which is available by appointment, click here. 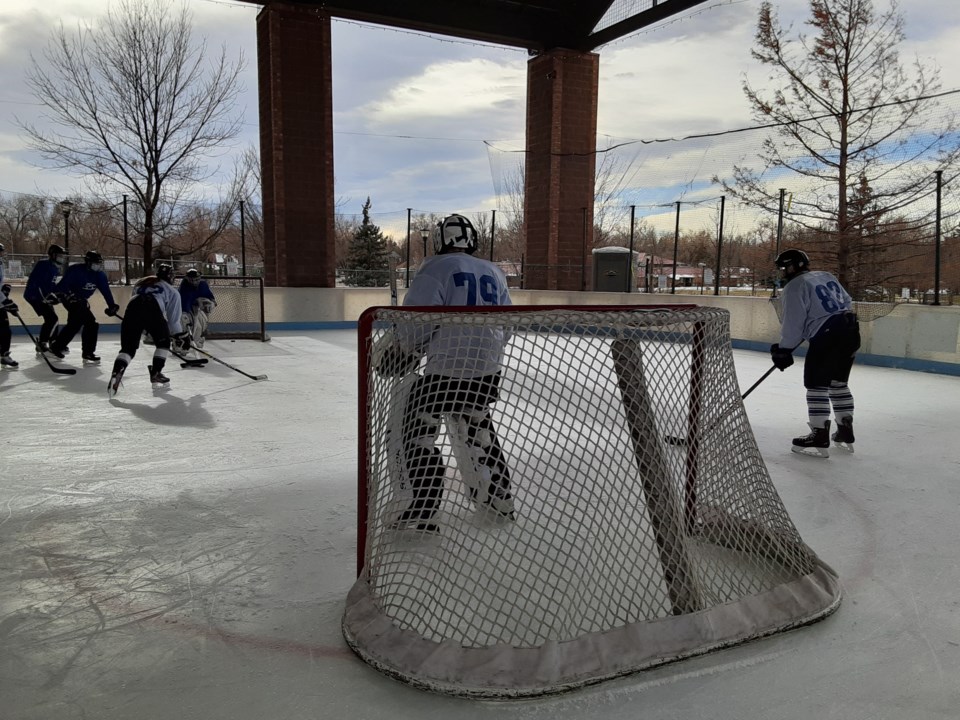