The Colorado Court of Appeals ruling on lift ticket and season pass waivers -- which release ski areas from “any and all liability” -- could erase resort safety responsibilities outlined in laws like the Ski Safety Act and the Colorado Passenger Tramway Act
Jan 14, 2021 12:00 PM By: Jason Blevins, The Colorado Sun 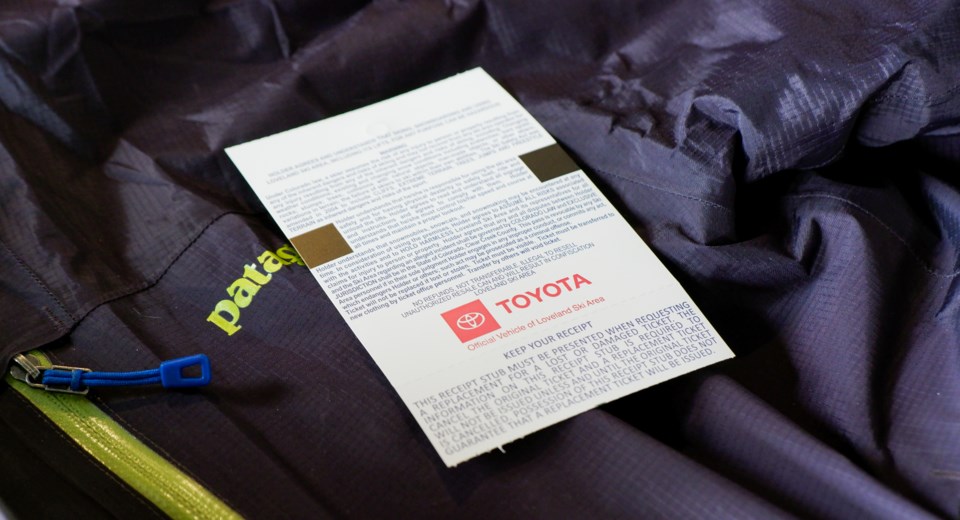 The waiver on the back of the Loveland ski area lift ticket informs skiers they ”agree to assume all risks” and to “hold harmless” the ski area for “all claims to injury.” All season passes and lift tickets in Colorado include liability waivers that requires skiers to agree to not sue.Jesse Paul / The Colorado Sun

Editor’s note: This story was originally published by The Colorado Sun and was shared via AP StoryShare.

A Colorado Court of Appeals panel on Dec. 31 delivered the first state appellate decision affirming the use of waivers to protect ski resorts from lawsuits filed by injured skiers.

Charlotte Redden, who was struck by a chairlift at Loveland ski area in 2017, plans to appeal the decision to the state Supreme Court. A decision by the state’s highest court would determine if the tiny-print waivers on the back of lift tickets that release resorts from “any and all liability” take precedence over the state’s Ski Safety Act, which assigns some responsibilities for skier and lift safety to resort operators.

Jim Chalat, an attorney who has represented many injured skiers in lawsuits against ski resorts, has railed against ski resort waivers for years and sees the state appeals court ruling last week as rendering the Ski Safety Act “dead letter,” which means it is no longer enforceable.

“Ski resorts no longer have any duties,” he said of the decision handed down on New Year’s Eve. “All they have to do is print a lift ticket with tiny font that says we are not liable for anything and they have no responsibility.”

The 2-1 decision by the three-judge panel agreed with a lower court’s summary judgment in favor of Loveland ski area owner, Clear Creek Skiing Corp., in a case involving Redden’s injury when she got off a chairlift at the ski area in March 2017.

When a skier in front of her fell while unloading Loveland’s Ptarmigan chairlift, Redden was struck by the lift as she navigated around the fallen skier. She suffered a broken pelvis and sued the ski area, arguing the lift attendant should have slowed the lift and was negligent under laws outlined by the state’s 1979 Ski Safety Act and the 1964 Colorado Passenger Tramway Safety Act.

But the previous year, Redden had purchased a pair of ski boots and had her ski bindings adjusted at the Loveland ski shop. In that transaction, she signed a waiver promising to “assume all risks” in skiing at the resort and “agree to hold harmless, release, defend and indemnify” the ski area “for any and all liability” in claims for injury or death. The print on the back of her lift ticket had similar language.

Redden argued she did not enter the signed waiver for her ski boots fairly and that the resort was holding her property until she signed the document. She did not even sign the agreement for the nonrefundable lift ticket. She also argued that the waivers were contrary to the Ski Safety Act and passenger tramway regulations that assign some safety responsibilities to ski areas, like lift operations, signage, lights on grooming machines and boundary designations.

“We reject Redden’s assertion that the use of exculpatory agreements like those in the present case leaves skiers’ safety wholly at the mercy of ski industry employees and removes any incentive for ski areas to effectively manage risks of skier safety,” the decision reads. “Under our law, exculpatory agreements cannot operate to release another person or entity from liability caused by grossly (i.e., willful and wanton) negligent or reckless conduct.”

The decision jibes with a federal appeals court decision in 2018 that Vail Resorts’ lift ticket waiver protected it from a claim by a woman injured as she skied off a chairlift at Keystone in 2015. In that ruling, the 10th U.S. Circuit Court of Appeals noted Colorado’s “relatively permissive public policy toward recreational releases … no doubt means some losses go uncompensated.”

In her dissenting opinion, Janice B. Davidson, a former chief judge for the Court of Appeals who served on the panel, said waivers that immunize a ski lift operator from liability for injuries alter the responsibilities resorts must assume to protect skiers under the Ski Safety Act and Passenger Tramway Safety Board regulations.

“The ski lift operator suffers no financial consequence for negligent violation of those duties with which it is otherwise required, by law, to comply,” wrote Davidson, who argued the waivers signed by Redden should not bar her from suing a ski area for violating responsibilities detailed in the Ski Safety Act and tramway board regulation.

The Ski Safety Act, which has been amended several times since 1979, does not necessarily immunize resorts from lawsuits involving injuries on ski lifts. It also does not protect ski areas from negligent or reckless actions.

That protection for skiers, who largely assume all the other risks associated with skiing, stemmed from a March 26, 1976, accident in Vail that sent two gondola cars plummeting 125 feet to the ground, killing four skiers and severely injuring eight others.

Lift safety should be treated differently than other responsibilities shouldered by skiers, said attorney Nelson Waneka, who represented Redden.

“You get on a chairlift, you have zero control over design, maintenance, inspection and operation,” Waneka said in an interview. “You really are at the mercy of the lift operator.”

The Court of Appeals decision effectively negates the Ski Safety Act and the rules of the state passenger tramway board because all protections can be erased with a waiver, Waneka said.

“Former-Chief Justice Davidson is right, here. All of the duties that are imposed on ski areas under the Ski Safety Act are virtually meaningless now,” said Waneka, who plans to appeal the case to the Colorado Supreme Court. “All the ski areas in Colorado use these waivers, so what rights do people have any more?”

Over the years, several ski states and federal courts have grappled with the balance of waivers and ski safety statutes that detail the responsibilities of skiers and resorts. That legislation, like Colorado’s Ski Safety Act, is designed to divide the responsibility for safety on the slopes between skiers and operators. All the states require resorts to maintain a certain level of safety on chairlifts, with regular inspections and maintenance.

And the balance has worked. Chairlift accidents are uncommon and deaths are very rare. A lift malfunction at Granby Ranch ski area in 2016 flung a chairlift into a tower, ejecting Texas mother Kelly Huber and her two daughters. Huber died as result of the fall and her girls were severely injured. A Grand County District Court judge last fall rejected the resort’s call to dismiss a lawsuit by the Huber family, which was based on the fact that she had signed a liability waiver to secure her season passes.

“Nowhere in the season pass agreement does the ‘undersigned’ accept the risk of a lift malfunction, faulty equipment, or even falling from a chairlift,” reads Judge Mary Hoak’s ruling denying the Granby Ranch motion to dismiss the lawsuit.

Colorado’s Ski Safety Act was meant as a compromise to protect resort operators from lawsuits while ensuring the safety of skiers, especially when they were riding chairlifts. The legislation, mirrored in other ski states across the country, defines the inherent risks of skiing with a specific list of more than two dozen hazards. If someone is injured by one of those risks — like changing weather or snow or terrain — the resort is immune from liability. But the legislation expressly allows civil actions against resort operators who violate regulations set by the passenger tramway safety board, which lists hundreds of requirements for operators of chairlifts.

Bruce Braley, the attorney who is leading the Huber case and a former eight-year U.S. Congressman for Iowa, said Colorado law requires lift operators to follow the highest standard of care.

“If this decision (in the Redden case) stands and becomes the law in the state of Colorado, then the legislature clearly needs to act to clarify that they did not intend to give blanket immunity to ski resorts when they passed the Ski Safety Act and the Passenger Tramway Safety Act,” Braley said. “If this decision is upheld and all ski area operators have blanket immunity in using their chairlifts … it’s a terrible blow for skiers in Colorado.”

Some ski states, like Montana, Utah and Alaska, have seen courts or legislators prevent waivers from excluding certain resort responsibilities or stopping lawsuits involving gross negligence. Chalat does not expect to see that here in Colorado.

“The ski area operators in Colorado comprise a very well-connected and well-lobbied industry group which will oppose any effort at the legislature to write an amendment to the Ski Safety Act that says the duties set out wherein may not be excluded by a waiver,” Chalat said. “Who knows what industry is next, but there will certainly be more.”