The herd between Aspen and Snowmass Village has become academia — part of a six-year study helping state biologists and researchers figure out why the elk population is struggling in parts of Colorado.
David Krause, The Aspen Times Mar 11, 2021 1:00 PM

Editor’s note: This story was originally published by The Aspen Times and was shared via AP StoryShare.

Elk have been roaming the Roaring Fork Valley for centuries, and the gang that makes its way around Sky Mountain Park has given visitors a taste of mountain life and locals a reason to pause when they go by on their morning or evening commute.

The herd between Aspen and Snowmass Village has become academia — part of a six-year study helping state biologists and researchers figure out why the elk population is struggling in parts of Colorado.

Friday morning started with bluebird skies, fresh snow blanketing the field off Owl Creek Road and elk on the move. A group of about a dozen wildlife officials worked on the ground preparing a makeshift lab in thigh-deep snow while others were in the sky with a spotter plane, and a capture helicopter crew was at the ready.

Wildlife researcher Nathaniel Rayl is spearheading Colorado Parks and Wildlife’s multiyear study on birth rates and recruitment into four of the state’s herds. Officials want to see why calves are not making it into some herds — recruitment — by age 1 at the rates they did previously.

With the recreation use in this area, researchers are culling information on how human recreation may be influencing the behavior of these elk and potentially the recruitment, Rayl said Friday morning as the hum of the spotter plane could be heard circling Sky Mountain.

“We have a unique situation here with declining recruitment, and we have this high level of human recreation on the landscape,” he said. “So, we’re looking at how population dynamics may be behaving where we have that lower recruitment and higher recreation.”

The gang that roams this part of the Roaring Fork Valley is part of a greater group known as the Avalanche Creek Elk Herd, which numbers roughly 5,000 elk and roams about 850 square miles. A helicopter brings a pregnant elk into the landing zone for testing on Owl Creek Ranch in Snowmass on  March 5. Colorado Parks and Wildlife are planning to capture approximately 40 pregnant cows and put vaginal implants and collars on the elk to monitor the herd population and recruitment. By Kelsey Brunner/The Aspen Times
After finishing up Friday morning at the Owl Creek Ranch, the CPW caravan and those in the sky were headed toward elk near Marble and Carbondale.

They have 10 spots picked out to sample a total of 40 cows from this herd, CPW officials estimate. After collaring 17 on Friday, Rayl and others hope to be finished in this area by Sunday. On a good day, they can collar about 20 cows, he said.

“We’ve had a 30 to 40 percent decline in calf-cow ratios,” he said. “You can’t sustain an elk population off that kind of recruitment.”

Ideally, he said, the best herd management “is in the ballpark of the mid-40s, just to keep the population status quo.”

The Rayl study, which started in 2019, is at the midway point after this season’s data is collected. The estimated budget is up to $1.5 million by the time it is finished.

The research group arrived Friday morning outside of Snowmass after two days near Craig in the Bears Ears area. There for the third year, they collared 40 cows in different areas of that herd. Rayl said those elk are doing very well and are a model on how to perhaps help the struggling herds.

After working this weekend around the Roaring Fork and Crystal River valleys, the CPW group and contractors will go west to the Uncompahgre Plateau near Montrose to collar 40 cows in that herd before finishing in southern Colorado with 20 cows at Fishers Peak State Park outside of Trinidad.

By 9 a.m. Friday, nearly a dozen people — including local wildlife officials, state biologists and state veterinarians from Fort Collins — had gathered on a snowy road at Owl Creek Ranch. They quickly cleared two small patches in the snow where the helicopter would lower the cows.

But before that, a red-and-white fixed-wing spotter plane had been flying over Sky Mountain Park to look for elk. That task was helped by locator collars previously put in the herd as well as new tracks in the snow after a few inches fell Thursday night.

“The snow definitely can help with seeing fresh tracks,” Rayl said, “and it certainly helps with good capture conditions when you have nice, soft snow.”

As soon as the herd was located, the helicopter crew from QuickSilver Air went up with three people on board: the pilot; a net gunner, who deploys the net; and the mugger, who is the first to jump out of the bird to calm and secure the cow.

“It’s a fun gig,” said 29-year-old Harley Cushman, who’s been on a Quicksilver crew for three seasons and spends his summer as a farrier in Wyoming. “A guy I shoe horses with, he did it for 10 to 12 years for another company and I wanted to get into it.” Colorado Park and Wildlife officials perform ultrasounds, draw blood and check vitals on a pregnant elk on Owl Creek Ranch in Snowmass on March 5. The crew consisted of wildlife technicians, officers and veterinarians. By Kelsey Brunner/The Aspen Times
Quicksilver is based out of Alaska but has a location in Colorado Springs. Part of their service is capture work for state and federal wildlife projects for any kind of ungulates. The contract company also helps with herd counts in December and January before the males start dropping their antlers.

Once out of the helicopter, the mugger and gunner quickly puts blinders on the elk and secure its legs, then remove it from the netting and get it into a large bag. That setup is attached to a line on the helicopter, which lifts off and flies the dangling cow to the team on the ground.

“You’re putting them in a very high-stress situation. They certainly think it’s a giant eagle trying to eat them or a fire-breathing dragon,” Cushman said. “We really try to work these animals calm. At the end of the day, we want to go home in one piece and want all the animals to go about their lives as usual. … We try to take a lot of pride in working to put a net on them that causes them the least harm.”

The elk are not flown more than about a mile from where they are captured, Yamashita said, one of a number of efforts to keep the stress as minimal as possible.

“We don’t want to try to fly them 10 or 20 miles at a time. We want to minimize the risk,” Yamashita said. “That’s why we have so many different sites. We don’t want to pick on the same group of elk over and over.”

Getting samples from around the greater herd also lessens the stress as the crews don’t want to chase a herd for more than a few hours. Friday’s work at Sky Mountain lasted less than two hours to get four cows.

The goal is to find cows that are pregnant, and in Friday’s work at Owl Creek, three of the four cows were. The one that was not got an ear tag (not a collar) and a few vitals were taken before it was released just as the next elk was hovering above.

Once the elk is lowered into the landing area, the ground crew moves quickly but calmly, kind of like a NASCAR pit crew. Everyone has an assignment, and they work in tandem to get the information and release the cow.

In the approximately 15 minutes the elk is under review, the crew removes it from the bag and immediately checks its temperature to make sure it is not overly stressed. From there, it is given a mild sedative and has oxygen put in its nose and the biologists, technicians and vets go to work. 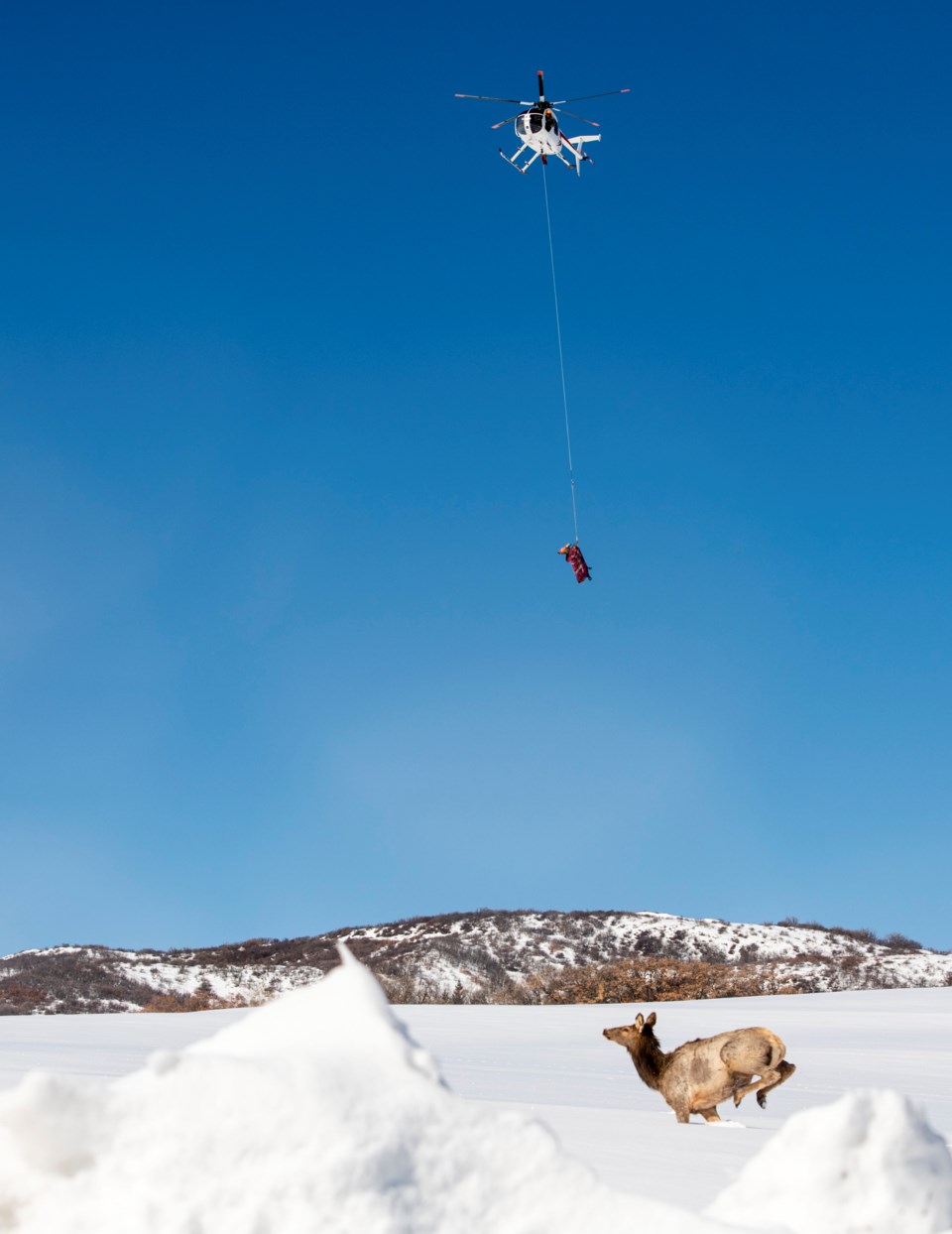 A female elk is released without a collar after finding that she was not pregnant as another cow is brought in by helicopter for testing on March 5. Of the first four cows that were captured, tested and released, three of them were found to be pregnant and then collared and implanted. By Kelsey Brunner/The Aspen Times

They first determine if the cow is with calf and an ultrasound is performed. As well, a number of measurements are taken, blood drawn and teeth checked to determine its age.

“I don’t think there is a set time. Usually we have these animals processed within 15 minutes, so it’s relatively quick and straightforward,” said Mary Wood, a state wildlife vet out of Fort Collins in her second year on the project. “If they’re a little on the warm side, we get them processed a little more quickly to get them out and up on their feet, but it goes relatively quickly.”

A tracking collar, which eventually will fall off and be retrieved, is placed on the ones that are pregnant and a Vaginal Implant Transmitter (VIT) is inserted.

That small device will fall out as the elk gives birth, which is usually in the end of May. This study is the first time the device has been used in Colorado, Rayl said.

“If the VIT temperature drops below 32 degrees Celsius or if it detects light, then we get a birth alert,” he said. “That GPS collar on the cow is checking the light and temperature readings on the VIT every 20 minutes. If it detects a drop, then the GPS collar takes the coordinates of that location and sends us a text message and email of that location so we know when and where.”

From then, a CPW crew in the area will try to find the device within a few hours and locate the mother and collar the calf.

“We’re trying to learn what factors are influencing population dynamics of these herds and what sort of influence recreation might be having on the herd,” Rayl said, “so we can have sustainable recreation and elk herds on the landscape for generations to come.” A female elk is placed in a testing zone on Owl Creek Ranch in Snowmass on Friday, March 5, 2021. This is the third year of the six year program and there are nine capture sites in the Roaring Fork Valley. By Kelsey Brunner/The Aspen Times