Outside: Always important, avalanche safety takes on added weight as pandemic sends more into the backcountry

Warmer weather has brought some relief to concerns, but many remain on high alert this year after 11 people have been killed this winter. That’s just one death away from the record set in 1993. Experts say there are multiple reasons for the uptick, but many in the outdoor industry think it could be caused by more people in the backcountry.
Alex Murphy Mar 18, 2021 1:00 PM

Following historic snowfall across Colorado last weekend, many turned to the Colorado Avalanche Information Center after it issued an avalanche warning for many parts of the Front Range.

Warmer weather has since brought some relief to those concerns, but many remain on high alert this year after 11 people have been killed this winter. That’s just one death away from the record set in 1993. Experts say there are multiple reasons for the uptick, but many in the outdoor industry think it could be caused by more people in the backcountry.

“I think it’s a little bit of the uncertainty of the ski resorts. People are worried if they're going to be open or not, is one. And two, you need to have reservations. And three, people’s comfort level of being around other people,” said Matt Burditt, co-owner of Longmont ski shop Angles Sports Exchange. “So, going to the backcountry there aren’t any reservations and there are no times they’re open or closed, and there’s probably not many people around you. So there’s a lot of reasons people are choosing to go the backcountry route.”

Burditt said Angles staff members pride themselves on making sure people are educated before heading out to the backcountry and the store partners with the Colorado Mountain School to help customers prepare. This includes taking an avalanche safety course considered vital for anyone who could be potentially near an avalanche. It’s something that has more weight this year as the COVID-19 pandemic has led to skyrocketing sales and rentals of backcountry skis and snowshoes as more people look to get outside.

Dustin Dyer, co-owner and director of Kent Mountain Adventure Center, another organization focused on avalanche safety, said, “What I think it is is the influx of new people flooding the places experienced people used to ski, which is pushing them into new zones they don’t know as well.”

In general it’s a little unlikely for snowshoers and cross-country skiers to end up in avalanche territory because they’re more focused on trails and not looking for steep slopes like backcountry skiers would, but it’s something almost anyone should keep in mind, Dyer said. 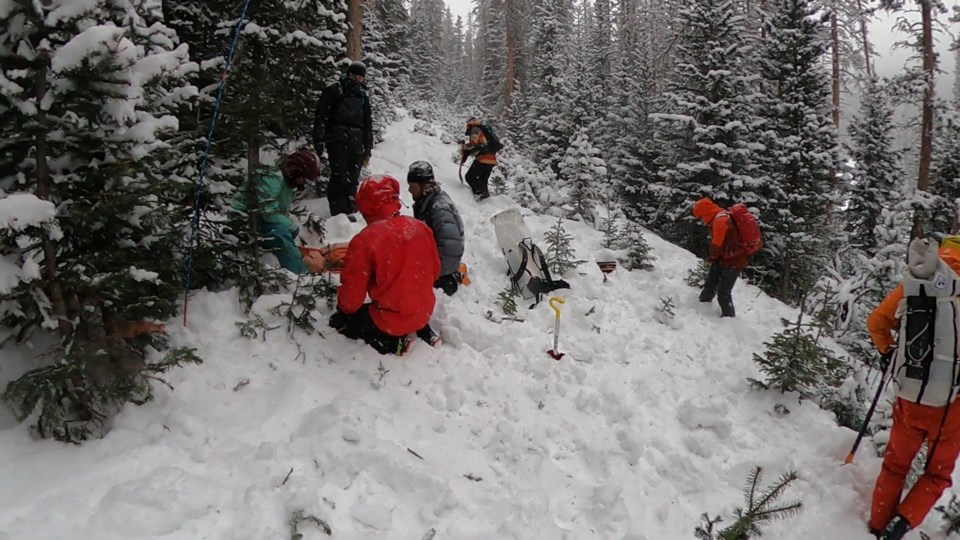 “People need to at least get into what we call ‘avoidance,’ and ‘avoidance’ is identifying slopes that are 30 degrees, and avoiding going under things like that,” Dyer said. “That’s enough for most people right there. That’s the most basic level of education. Don’t go into that, don’t go under that.”

It’s important for backcountry skiers to do some research before they go so they understand the terrain and what they're getting into, Dyer said. Anyone in the backcountry needs to avoid walking through an avalanche prone area, which is even more dangerous if they have to go back that way to get home, he said.

Dyer also recommends skiers look for what he calls “vegatative clues” —areas in the open devoid of trees or other plants because repeated avalanches have bowled them over.

“Something we stress a lot in the avalanche education classes is suddenly you walk out into an open area. Why is it open? Asking those questions,” Dyer said. “Just anytime, especially in big terrain, like there’s giant mountains all around you, keeping your head on a swivel and knowing what’s above you.”

Areas less prone to avalanches are called “dark timber” — old growth forests where historically an avalanche has not moved through in some time, Dyer said.

Like many in the industry, Dyer knows education is key, as is having the right equipment, which is something Angle’s Burditt also stresses to his customers.

“There’s no reason to have skis or snowboards if you don’t have the safety equipment to go out there,” Burditt said. “The response we get a lot of the time is ‘Well I’m not going to go anywhere that’s dangerous.’ Sure you could do that and stay on flat terrain, but it’s definitely concerning when we sell significantly more skis and backcountry equipment than we do avalanche gear. It should certainly be one to one, right?”

Basic safety gear for backcountry skiing is expensive, but so is the sport in general and people need to consider that part of the hobby, Burditt said. He recommends at least three pieces of equipment:

Other popular gear Burditt recommends includes an AvaLung, which basically is a snorkel connected to a backpack to provide additional oxygen; and backpacks that include airbags that allow a potential avalanche victim to float on top of the snow and debris.

“We definitely stress it to try and get the point across, buy your avalanche gear first and then get the equipment to get out there,” Burditt said. “A lot of people don’t take our advice but that’s the advice that we give.”