Amid a pandemic economy and record wildfires, is it time for a 21st-century Civilian Conservation Corps?

The original CCC might be nearly 90 years old, but the general concept still appears to have deep public support.
Oct 19, 2020 8:00 AM By: By Sam Brasch, CPR News 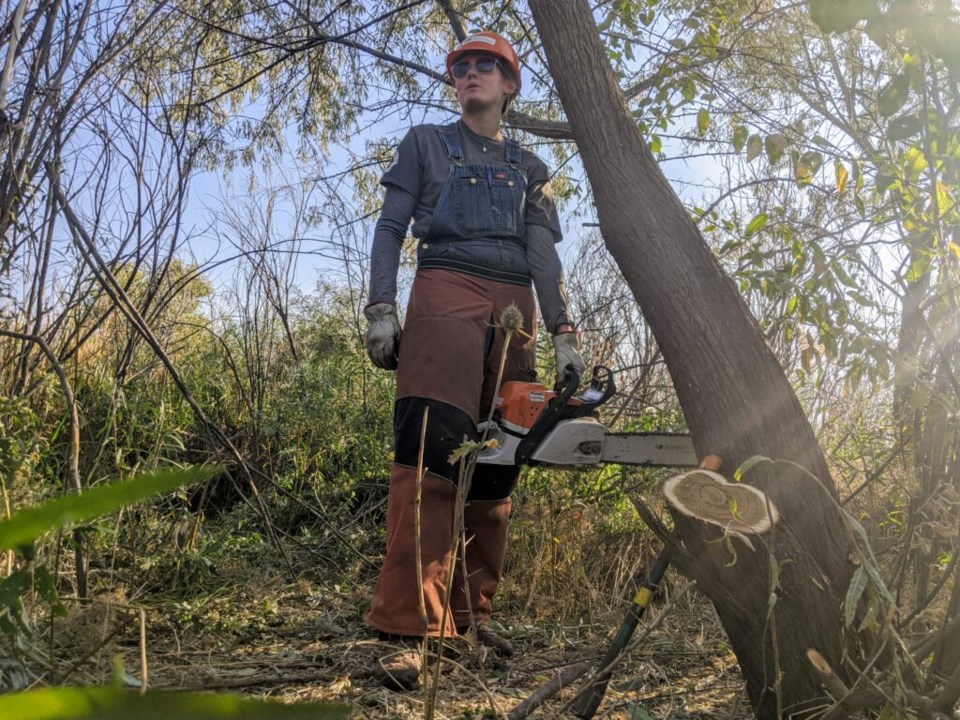 At a park outside Denver, 24-year-old Hailey Tresch loads pieces of felled invasive trees into the maw of a wood chipper. The logs are heavy, the day is growing hotter and the air is hazy with smoke from nearby fires.

“With COVID and with the election coming up, a lot of people can feel so helpless,” Tresch said. “Just to feel like you're doing something about something is so rewarding.”

Between high unemployment and forests packed with wildfire fuel, some congressional Democrats think it’s time for a rapid expansion of jobs like Tresch’s. Their plans hark back to the Civilian Conservation Corps, a New Deal program that employed more than 3 million Americans during the Great Depression. Now, lawmakers envision a new CCC to tackle both unemployment and land conservation.

“We believe that a 21st-century reimagined CCC could help us solve those dual challenges,” said Democratic Congressman Joe Neguse. “We could create millions and good-paying jobs ... and scale up the efforts that we know will ultimately ensure we are far more resilient and better prepared for the impacts of climate change.”

Last June, Neguse submitted one of a bevy of bills to revive the service. His 21st Century Conservation Corps for Our Health and Jobs Act calls for more than $40 billion to hire young people for public lands projects, fire mitigation, the outdoor industry and other projects. Oregon Sen. Ron Wyden has a companion bill in the Senate. Most recently, Illinois Sen. Dick Durbin, another Democrat, submitted his own proposal to put 1 million people to work on land and conservation projects.

Those proposals aren’t likely to become law anytime soon. For the moment, the bills appear to be markers for the sort of action Democrats might pursue after the election, according to groups behind the legislation.

The original CCC might be nearly 90 years old, but the general concept still appears to have deep public support. A recent poll from Data for Progress and the Justice Collaborative Institute, both progressive advocacy groups, found broad bipartisan support for the concept. Seventy-five percent of likely voters said they’d support a new federal version of the CCC to plant trees and fight fires, including 74 percent of Republicans.

Kate Chatfield, the policy director for the Justice Collaborative, said those results show a popular path forward on climate change. Chatfield said some Republican politicians might fight big government programs and deny the science of global warming, but Republican voters aren’t always on board.

“People are very smart. They want climate mitigation efforts. They understand that people need jobs and that the federal government has a role to play in that as well,” said Chatfield. 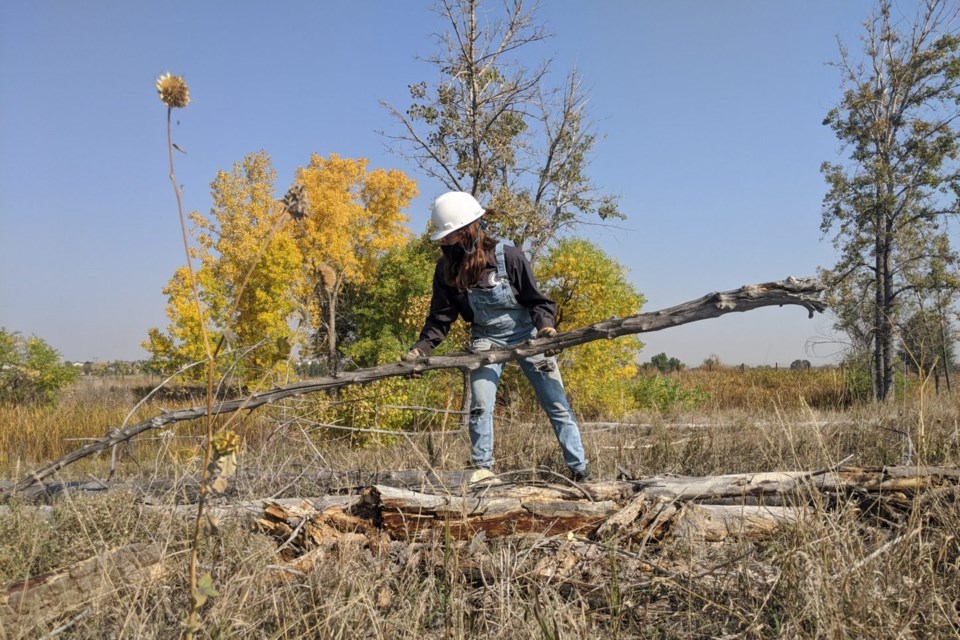 Hailey Tresch, a sawyer for Mile High Youth Corps, prepares to chip logs at a park in Adams County.(Colorado Public Radio)
Chatfield added the recent wildfire season has underscored the need for massive land management projects. While climate change has ensured longer and hotter fire seasons, decades of fire suppression in the U.S. have allowed fuels to build up in many western forests.

The problem is especially clear in the Elk Creek Fire Protection District around Conifer, in the foothills west of Denver. Jacob Ware, the district chief, has no problem finding tinderboxes of tightly packed spruces and lodgepole pines in residential neighborhoods. Thinning those forests is possible, but it’s a massive undertaking.

According to an upcoming report from the Colorado State Forest Service, an area larger than the size of Delaware requires immediate attention to address forest health, watershed protection threats and fire mitigation risk. The report estimates completing the task would cost about $4.2 billion.

Ware said he would welcome any extra federal help to tackle the issue, including a new CCC. He added the program should not only provide work, but also encourage young people to build a whole industry around fire mitigation. After all, even if the country manages to thin millions of acres of forest, it would still need to find a place for all the wood.

Not your dad's CCC

Gwen Ganow, a ranger with Denver Mountain Parks, can attest to the lasting economic impacts of the original CCC. Her job includes overseeing Red Rocks Amphitheatre, which many see as the greatest achievement of the original corps program. Today, the concert venue is a mecca for musicians and fans across the country.

“That’s my beloved over there,” said Ganow, looking out at Red Rocks from her office outside Morrison.

In a twist of government handovers, the Denver Mountain Parks system is headquartered at the same CCC camp where workers lived as they built the amphitheater during the Depression. Ganow loves leading tours of the mess halls and bunkhouses. The city has worked to restore the camp in recent years, filling the buildings with footlockers, belt buckles and pickaxes from the original program.

Ganow can also point out some antiquated aspects of the CCC. A photograph of one of the camp’s companies includes a living black bear mascot. All the faces also appear to be white. While the service was designed to be open to unmarried men between the ages 18 and 25, many camps segregated Native and Black enrollees from their white peers.

The corps was also organized by the military, which is part of the reason it was nicknamed “Roosevelt’s Tree Army.” While the distinction might sound quaint today, Ganow said many critics of the New Deal didn’t love army-like camps dotted around the countryside. That’s one reason the companies tried to avoid overt displays of militarism, like weapons training or guard towers.

Neguse said any new CCC would be open to everyone. Also, rather than relying on the military, a 21st-century CCC would likely build on existing conservation corps programs still scattered across the country.

According to the Washington D.C.-based Corps Network, more than 130 conservation corps still exist in the U.S., mostly operated by state and local governments. Many already receive federal support through the AmeriCorps program.

The federal government also maintains its own Youth Conservation Corps and the Public Lands Corps. In the last year, the idea of a new CCC has gained enough attention in Washington, D.C., to prompt a report from the Congressional Research Service. The nonpartisan review looked at ways the government might actually go about restarting the program. One option would be to vastly increase resources for the two existing federal programs, which Congress has funded at a combined $72 million a year. By contrast, Congress spent the 2020 equivalent of $5.9 billion on the CCC at its height in the 1930s.

Whether or not it’s brought back, Ganow thinks the original CCC offers a lesson about confronting an economic crisis. The program offered plenty of material benefits. Participants earned a dollar a day for their work. Regular meals also meant the young men gained an average of 11 and 15 pounds during their service, according to government reports.

But beyond a job, Ganow said it also offered a sense of purpose to millions of young men.

“They took pride in their work,” she said. “How much pride is there in sitting at home, collecting an unemployment check?”

CU Boulder struggles to enroll low-income students. That has consequences for Coloradans’ social mobility
Dec 1, 2020 2:00 PM
Comments
We welcome your feedback and encourage you to share your thoughts. We ask that you be respectful of others and their points of view, refrain from personal attacks and stay on topic. To learn about our commenting policies and how we moderate, please read our Community Guidelines.