“The five recipients of these Medallion Awards each played an invaluable role in ensuring the 2020 General Election was successful,” said Secretary Griswold.
Feb 1, 2021 8:30 AM By: Community Submission 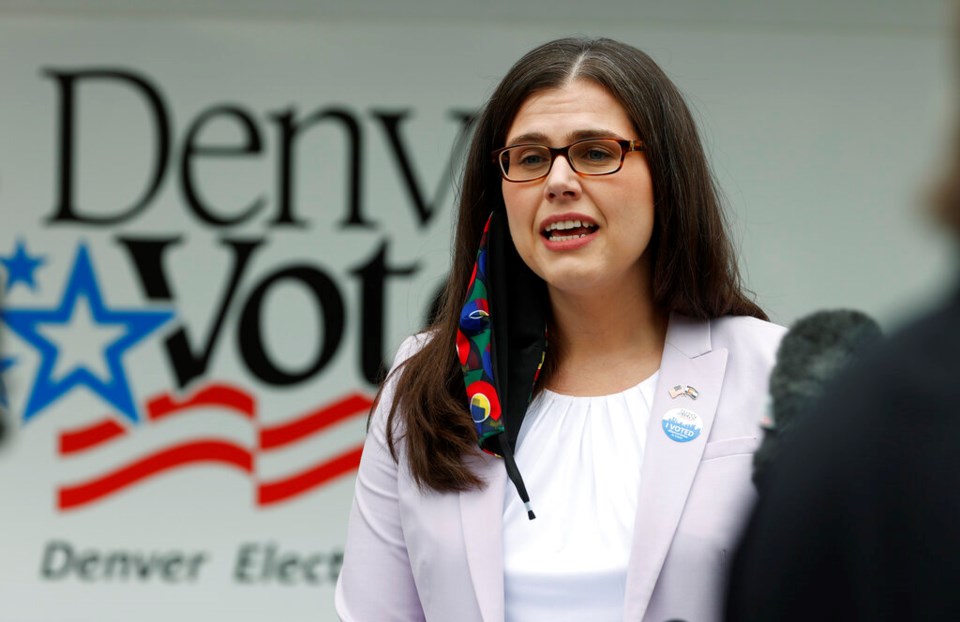 In this June 30, 2020, file photo, Colorado Secretary of State Jena Griswold makes a point during a news conference at a mobile voting location in the Swansea neighborhood in Denver. Colorado is expanding its mail-in ballot tracking app so that all voters in the state can use it. Secretary of State Griswold announced Monday, Sept. 14, 2020, that voters in all 64 counties will be able to check the status of their mailed ballots for the 2020 election and receive notifications by phone, email, or text. (AP Photo/David Zalubowski, File)

“The five recipients of these Medallion Awards each played an invaluable role in ensuring the 2020 General Election was successful,” said Secretary Griswold.  “I’m happy to recognize their enormous achievements while also extending my profound thanks to each of them for their hard work in making sure the election went so well both in Colorado and nationwide.”

While the East Troublesome fire raged in Grand County in October, Grand County Clerk Rosene and her staff collected ballots out of a drop box in Grand Lake, which had been evacuated, and made sure the Voter Service and Polling Center in Granby remained open for early voting despite a constant threat of evacuation.  Clerk Rosene’s leadership ensured that Grand County voters could cast ballots during an unprecedented natural disaster.

If ever there was an example of the effects of COVID-19 on election workers, it was in Gunnison County, where nearly all of the staff contracted the virus during the important period of post-election canvassing and certification.  Even amidst this health crisis, Clerk Simillion and her staff continued their work and made sure the results from Gunnison were certified in time.

Colorado is known throughout the country for its exceptional voter access, but Clerk Zygielbaum in Adams County took an additional step to open a voting center on the Sunday before Election Day for in-person voting.  This additional access not only provided an extra day for voters to cast ballots in person, it created another measure to help alleviate potential crowds leading up to November 3 and facilitated social distancing.

On a national scale, Christopher Krebs, the former Director of CISA, fought back against election domestic and foreign misinformation, and fortified election cybersecurity. At times Krebs pushed back on misinformation spread by the former President, which ultimately cost him his job. His courage, commitment, and leadership are one of the reasons the 2020 Election was the most secure in our nation’s history.  Under Krebs’s leadership, state Protective Security Advisors, Cybersecurity Advisors, Intelligence Officers, and Region Directors have been critical partners with state and local officials to make sure every level of election security, from the counties to Washington D.C., have been in coordination.

More Coloradans participated in the General Election than ever before.  A big reason for that voter enthusiasm is the work of civic organizations like the Colorado chapter of the League of Women Voters, which for years has worked tirelessly to inform and educate voters to promote civic engagement.  The League of Women Voters work was very important in this election, and they helped voters navigate the pandemic and unfounded concerns over mail ballots. Their determination and commitment to Colorado voters helped the state reach historic participation levels despite historic challenges. Under the direction of Beth Hendrix, the League of Women Voters once again demonstrated their importance to Colorado’s nationally-renowned election model.

The NASS Medallion Award allows individual Secretaries of State to recognize outstanding service and dedication to furthering the mission of the National Association of Secretaries of State within each state. The NASS Medallion Award was created to honor individuals, groups, or organizations with an established record of promoting the goals of NASS in one or more of the following areas: elections, with special emphasis on voter education and participation; civic education; service to state government, specifically as it relates to the duties of the office of the Secretary of State; a business or individual whose philanthropic contributions have significantly enhanced the quality of life in a local or regional area within a state, or within an entire state.

United Airlines introduces bus service straight from DIA concourse to the base of Colorado ski resort
Feb 28, 2021 11:00 AM