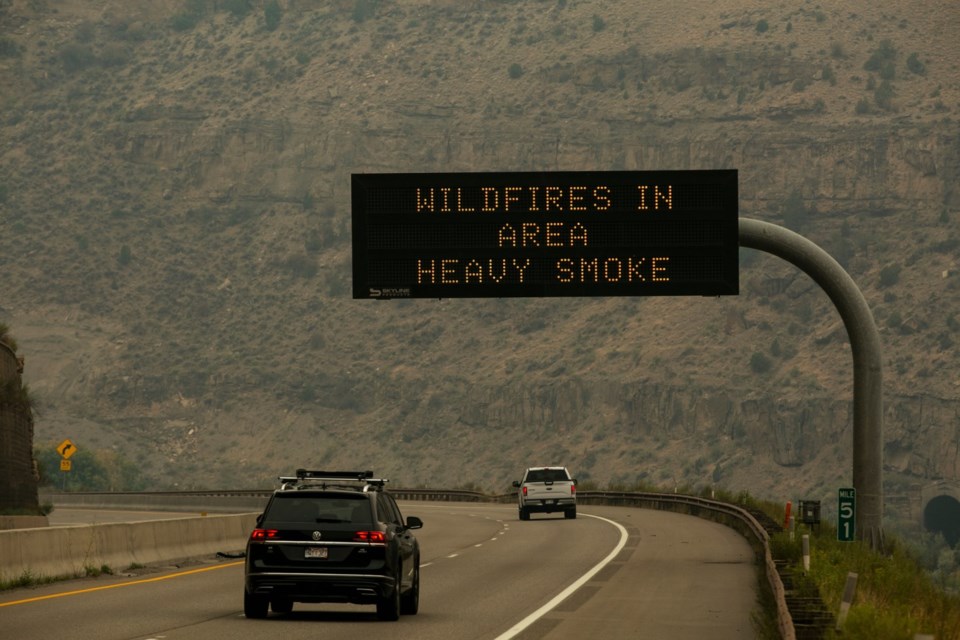 A thick smokey pall settled over the Grand Junction region, including here on Interstate 70 near Debeque in August, 2020, from the Pine Gulch fire.Colorado Public Radio

Coloradans should brace for another formidable year of wildfires, according to an annual forecast from the Colorado Division of Fire Prevention and Control. The report, released today, warns ongoing drought conditions could intensify throughout 2021, priming forests for another year of large, fast-moving and destructive blazes.

Thanks to a changing climate and forest conditions, Polis said Colorado could no longer limit its plans to a limited set of months. Intensified efforts to prevent and battle fires would need to continue year-round.

The setting for this year’s wildfire season is built upon prolonged drought, last year’s historically dry weather and the Earth’s warming climate. With dry soil and vegetation, fewer drought-breaking rains and snowpack melting earlier than usual, experts say the risk for wildfires is increasing.

The forecast fits with a long trend of more intense fires. Four of the five largest wildfires in state history have occurred in the last five years. The fire season is now 78 days longer than it was in the 1970s, Morgan said.

The 2021 forecast also follows one of Colorado’s most destructive wildfire seasons.

The COVID-19 pandemic also hampered the state’s wildfire response, making it harder to staff incident management teams and bring in additional crews from outside the state, according to the 2020 report. As more people receive vaccinations and pandemic restrictions are loosened, state authorities expect already surging visitation to park and wilderness areas to increase, Polis said.

The number of people living near fire-prone wilderness areas is also increasing, Polis said. Currently, about 2.9 million people live in a hazardous transition area known as the wildland-urban interface — a jump of about 900,000 residents in the last five years.

Fire experts have stressed the need to build homes with fire-proof materials and cut and trim surrounding vegetation, work which is largely left to individual homeowners.

Foresters, elected officials and residents have acknowledged the state will have to prepare for a new era of wildfires, which are larger and more destructive. Since 2020, interest and demand have grown for prescribed burns, stronger building codes and more timely and accessible wildfire information.

The annual report details Colorado’s preparations for the upcoming wildfire season. Like in past years, the plans call for the aggressive suppression of any fire that could threaten human life and property. According to the report, aircraft will be an especially important tool to help extinguish fires before they get out of control.

Gov. Polis recently signed a $31 million bill to buy and staff an additional Firehawk helicopter. The governor said the aircraft can deliver 800 to 1,000 gallons of water from a contained tank rather than an attached bucket. The technology allows the helicopter to travel over roads and reach fires in rough terrain. The funding will also allow the CDFP to lease an additional helicopter for the 2021 fire season.

Colorado also signed an agreement with federal authorities to ensure all aircraft are available to fight fires regardless of jurisdiction, officials said.

US parents excited over prospect of virus shots for children
May 5, 2021 4:00 PM

Colorado’s dyslexia screening pilot program off to a shaky start
May 5, 2021 10:00 AM
Comments