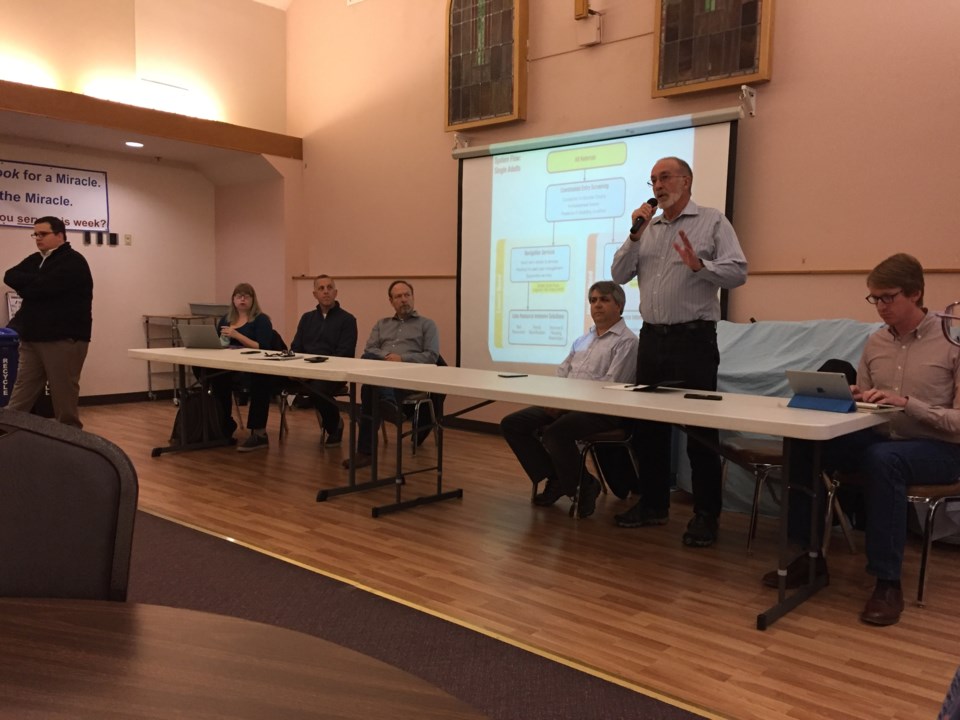 About 50 people squeezed into the fellowship hall of Longs Peak United Methodist Church Monday to talk about a possible year-round overnight center for people in Longmont experiencing homelessness. The event was moderated by Jake Marsing, chairman of The Way Home, a new homeless advocacy group. "We are concerned," he said, "that the people of Longmont are not getting the services they need."

Although the homeless population is hard to gauge, Marsing estimates it is around 200 -300 people in the city of Longmont. Seventy-five are actively seeking services, and probably around forty persons need a nightly bed. There is a new survey scheduled for the end of January.

In addition to providing year-round beds, the proposed forty-bed facility would also have showers, secure storage space for personal belongings and caseworker offices. And, in a perfect world, a second building dedicated to families. "It's not just about sleeping space at night," Marsing emphasized, adding that the center would be open in the daytime.

Andy Schwartz, project manager at HOPE, said the proposed plans would integrate "a lot of little pieces" and small needs like storage. "The gap happens at the end of April," he said when all the local shelters close until winter. "What do you do the rest of the year?"

Cameron McKay, a former volunteer with Agape, stressed the importance of having a safe and legal place to sleep, as well as a place to "stash stuff." He said that one individual struggling with homelessness told him that if he had to choose between a bed for the night and a safe place to store his belongings, he'd choose storage.

Asked about funding for the project, Marsing said that he would reach out to the community for donors. "We're not intending to use any public funds," he said, "but we have no firm answers."

Concerns mentioned by attendees included families experiencing homelessness, as well as people on the streets with serious medical problems. "Where do they go after one or two days in the hospital?" asked Evelyn Fontanez, a volunteer with both HOPE and the OUR Center. "We have lost three homeless people since October."

The talk also encompassed the idea of bypassing shelters and just getting people into housing. State Representative Jonathan Singer said, "the ultimate goal is not to build a shelter, but to eliminate the need for one."

"Shelters don't work so well," said a representative from the Boulder shelter, "when you get a lot of people together with impairments. You need to aim higher, towards housing."

According to Ken Caldwell, "the coalition is made up of representatives from HOPE and other local non-profits, the City of Longmont and concerned citizen," all aiming to address the "hole in the middle" between the streets and housing.

Marsing said that the task force would take feedback from the meeting and sit down with the non-profit partners. "I'm so encouraged," he said, "to see that this city cares."

*This article has been updated to reflect that the numbers of those suffering from homeless (200-300 people) is for the City of Longmont and not the county. Additionally, the number of agencies that make up the task force was misrepresented. Both have been corrected to reflect the correct infomation on Nov. 26, 2018.

UPDATE: Confrontations in Denver as protests over George Floyd death continue
May 30, 2020 7:36 AM

Conflict Resolution During COVID-19 Online Training
May 23, 2020 10:26 AM
Comments
We welcome your feedback and encourage you to share your thoughts. We ask that you be respectful of others and their points of view, refrain from personal attacks and stay on topic. To learn about our commenting policies and how we moderate, please read our Community Guidelines.