Dry conditions and low amounts of snow have firefighters concerned for worse fire season than last year
May 7, 2021 3:00 PM By: By Dylan Anderson 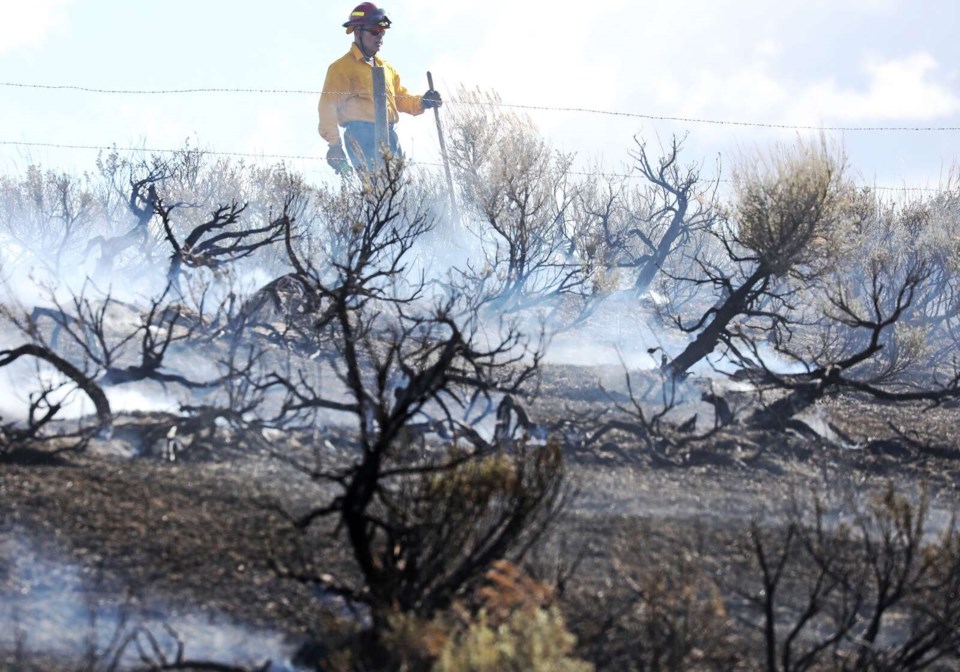 Editor’s note: This story was originally published by Steamboat Pilot and Today and was shared via AP StoryShare.

On Saturday evening, someone driving on Colorado Highway 131 saw some smoke and called 911. The call went to volunteer firefighters with the Yampa Fire Protection District, who raced out to the scene.

It wasn’t much. An agriculture burn from earlier in the day had continued to smolder and sparked itself back to life around 8 p.m. Firefighters were able to quickly extinguish the fire without it spreading.

Nearly every day in the past week, firefighters across the county have been responding to fire-related calls — investigating the source of smoke, checking out reports of a fire and putting them out when needed.

“This is the time that all the agriculture guys are burning, but up in the forests and stuff like that, it is dry with lots of stuff that is left from last year that could potentially be a fire,” said Machia “Ky” Cox, chief of the Yampa Fire Protection District.

Dry conditions last fall and a winter with a relatively low amount of snow have firefighters expecting the upcoming fire season to be just as bad if not worse than last year, which saw the largest three fires in Colorado’s history burn.

“Fuels are available to burn,” said Trevor Guire, chief of the West Routt Fire Protection District. “The fuel moistures are very low, and it won’t take much to dry them out.”

The main fire danger right now is because many fields have fuels like grass from last year that have dried out before new growth starts budding through. The new growth has more moisture and will slow down fires, but when things are dry, fires can move quickly. Even fuels Guire wouldn’t normally expect to burn, like willows, are dry right now.

Last Wednesday, Steamboat Springs Fire Rescue firefighters responded to a fire that started near Routt County Road 33 and spread rather quickly into a field. These types of fires are not uncommon this time of year, said Steamboat Fire Chief Chuck Cerasoli. Still, if not dealt with, they can grow into the larger fires that mired Colorado last season.

“We are anticipating and trying to be as prepared as we can for larger fires closer to home,” Cerasoli said.

He is asking residents to sign up for the county’s alert system, which would be the primary means of communication with people in case there was a fire near town. Right now, only about 13% of residents are signed up for these alerts, Cerasoli said. To sign up, visit routtcountyalerts.com.

“Everybody should be aware, as we have been seeing in other areas. Whether you live right next to a forest or not, fire is moving faster than we are used to and in unpredictable manners,” Cerasoli said.

The alert system is a handy communication tool to let people know about fires in their area and to help people evacuate if needed. He also encourages people to have a checklist of things to grab if asked to leave in an emergency.

If someone sees smoke, firefighters encourage them to call Routt County Dispatch. Many times, dispatch will already know if there is a controlled burn in the area as ranchers are supposed to let them know ahead of time.

“We need to by hyper vigilant this year, so we can get on them as quickly as possible,” Guire said.

Wind was the culprit that caused some of the state’s recent fires to grow so large, most notably the East Troublesome fire, which saw tens of thousands of acres burned in less than 24 hours last October. Cerasoli said embers could be carried several miles in strong winds, which cause fires to spread faster.

Cerasoli said firefighting resources are always limited, and he asks residents to mitigate any potential fire risks around their homes and in their neighborhoods.
Firefighters in the county work together on bigger fires. If one fire district is called to a fire they cannot handle alone, other area districts are called to assist. If they still need more help, firefighters in other mountain communities, like Vail and Summit County, are also available to respond as part of a regional partnership.
If the fires still required more manpower, there are additional state and federal firefighting resources that can be tapped.

“We take it as the fire grows,” Cerasoli said. “If we think it is going to go fast, we will call on them quickly. If we think we can handle it, we will do what we can.”