The little fish that could: Despite COVID-caused changes to program, St. Vrain students, partners reintroduce redbelly dace into wild

While “innovation” in the Innovation Center’s name conjures up images of robotics and aeronautics and other high-tech fields, it doesn’t exclude conservation. “Although it’s not a biology center or an ecology center, they’re innovating how to raise these fish,” Boulder County Parks and Open Space wildlife biologist Mac Kobza said.
Sep 2, 2020 6:00 AM By: Julie Baxter 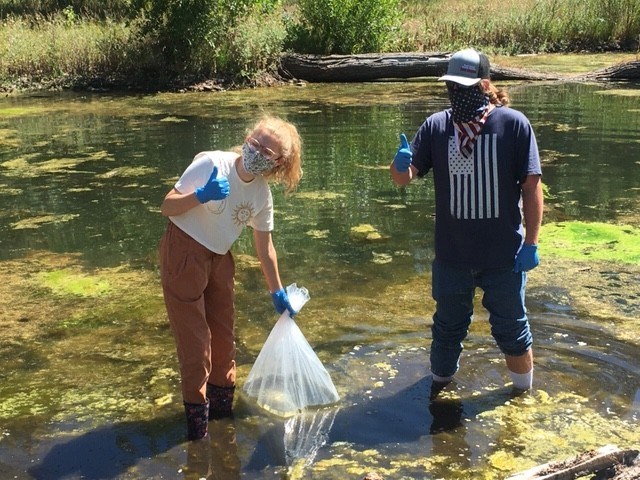 Maya Sol Rooney, left, and Zach Heil hold a plastic bag filled with water and northern redbelly dace in the pond in Lyons where the fish were released on Tuesday. The bags were held in the water to allow the fish to acclimate before turning them loose in the pond. (Photo by Julie Baxter)

Tuesday was a day for the “nerds.”

Technically, it was a day for the NRDs — northern redbelly dace — and the St. Vrain Valley School District students, educators and others who were all part of a project to reintroduce the endangered fish into the St. Vrain River ecosystem.

The students from Lyons Middle/Senior school and the Innovation Center of St. Vrain Valley Schools and the others gathered Tuesday to release 1,000 to 2,000 of the small but crucial fish into a pond on private property in Lyons. The 2013 flood, and resulting sediment buildup in local ponds, altered the habitat for the dace, which are listed as a Tier I Species of Greatest Conservation Need in Colorado.

Originally, the dace were to be released into Webster Pond at Pella Crossing, but game fish made their way into the restored pond, which means it was not quite ready for the dace. The dace, however, were ready, as were Mac Kobza and Mikki McComb-Kobza.

The husband and wife duo, a Boulder County Parks and Open Space wildlife biologist and executive director of the Ocean First Institute, respectively, have had a basement full of dace since the coronavirus pandemic shuttered schools in mid-March. Boulder County Open Space and Ocean First, as well as Colorado Parks and Wildlife, are partners in the project.

The original 40 fish, which were to be housed in tanks at Lyons Middle/Senior and the Innovation Center, were moved to the couple’s basement to keep the project going during remote learning.

“Mac and Mikki really went to bat (for the project),” said Axel Reitzig, coordinator of innovation at the Innovation Center. A bucket brigade transported all the fish to their home, and they kept the fish alive and thriving, he said. 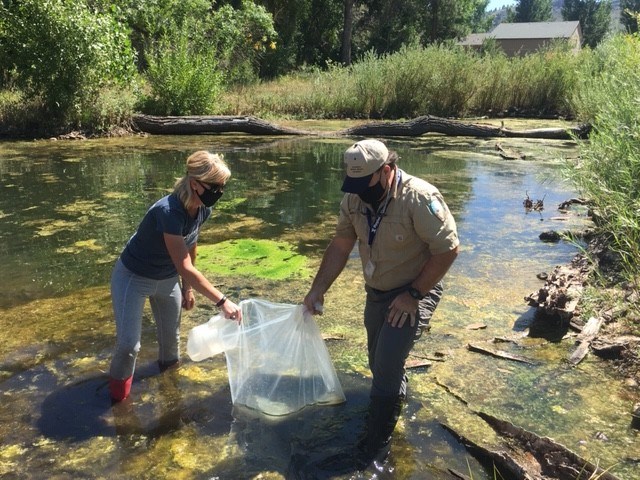 Mikki McComb-Kobza, left, and Mac Kobza hold a plastic bag filled with water and northern redbelly dace in the pond in Lyons where the fish were released on Tuesday. The bags were held in the water to allow the fish to acclimate before turning them loose in the pond. (Photo by Julie Baxter)

McComb-Kobza kept the water temperature just right to encourage spawning, as it would in the wild when cold mountain water enters streams to stimulate breeding, Kobza said. Northern redbelly dace are transition zone fish, which means they thrive in transition areas between cold and warm water streams, “which makes them tricky to raise,” he said.

The only population of northern redbelly dace in the state that were not reintroduced can be found in the Plum Creek drainage in Douglas County, which makes getting them back in Boulder County waters crucial, Kobza said. The original adult daces, which spawned seven times this summer growing to the 1,000-plus total released on Tuesday, came from the John W. Mumma Native Aquatic Species Restoration Facility in Alamosa.

The pond where the fish were released Tuesday is in the St. Vrain River floodplain, which means the dace possibly could be swept up and put back in the river in the event of flooding, Kobza said, but it is more likely they will stay safe in the ponds and “perhaps this can be stock to draw from to put them back in the river.”

The pond was created from the river itself, which rerouted during the flood, said property owner Matt Rooney. He said he and his wife became restoration ecologists by reading textbooks at night and he rented excavators and bulldozers to transform the land that was under 7 feet of water in 2013. The result is the pond, as well as restored acres that he said are now home to mink, bears, bald eagles, mountain lions, bobcats and owls. It only made sense that the pond be home to the little fish whose survival can mean big things to future conservation efforts.

Rooney’s daughter, Maya Sol Rooney, is a junior at Lyons Middle/Senior and was among the students who were ready to raise the fish in their classroom before COVID changed their plans. But she observed the dace and kept track of their progress via Zoom calls and streaming video from a webcam set up by McComb-Kobza.

“I was as involved with the process as best I could from home,” she said, adding that as a junior she would jump at the chance to be involved in another round of dace raising. “Maybe next time I’ll get to see them grow up.”

But even as she watched the fish from afar, the impact of the project was not lost on her. She said her biggest takeaway has been “how big of a difference a small little fish can have” and how it can bring together so many people.

Her classmate Zach Heil, also a junior, said he’s looking forward to seeing future fish in the classroom and just how far the project can go. He wanted to be a game warden before taking part in the project and is still excited about that future, too. 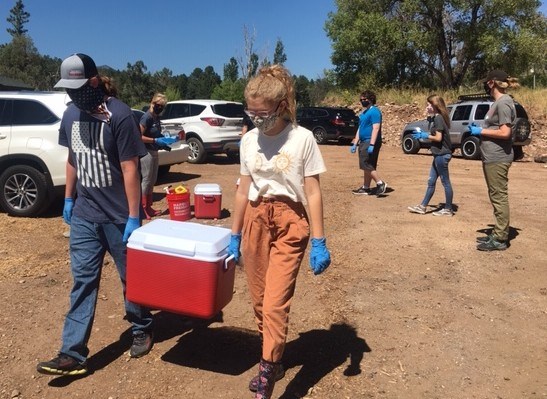 Zach Heil, left, and Maya Sol Rooney carry a cooler filled with northern redbelly dace to the pond in Lyons where the fish were released on Tuesday. (Photo by Julie Baxter)

Keeping students connected via technology is a bit indicative of what the Innovation Center is all about. “At the end of a day, technology should serve a greater purpose,” Reitzig said, adding that knowing the purpose of technology helps attract more students to center programs.

And while “innovation” in the center’s name conjures up images of robotics and aeronautics and other high-tech fields, it doesn’t exclude conservation, he said.

Kobza said “innovation” applies in this instance because the project not only takes aim at conservation, but also at engaging young people and the public so they can take ownership of their open space and environment. “Although it’s not a biology center or an ecology center, they’re innovating how to raise these fish.”

And while that might not seem like it will have practical implications for students, Kobza said you just never know when such knowledge will prove crucial.

“Whether (a student) becomes a redbelly dace biologist or a senior executive at a tech firm, they’ll have that background and maybe when the time is right and we need their help, they can be there. You can’t care for what you don’t know.”

Innovation Center projects are client-driven and authentic, Reitzig said, which means students are solving problems in the real world. They interview “clients” and brainstorm solutions and custom devices for their needs.

The dace reintroduction effort grew from other efforts at the center, including a project by an aquatics robotics team that created an underwater robot to aid a Denver Zoo researcher studying endangered frogs at Lake Titicaca in Peru, and developing a shark measuring wand for McComb-Kobza’s Oceans First Institute, Reitzig said. It also was inspired by a Trout in the Classroom project at Lyons Elementary School, which, as the name implies, has students raise trout from egg to fry and monitor tank water quality and learn about stream ecology.

Colleen Ford, assistant principal at Lyons Middle Senior, had been working with McComb-Kobza on other projects through the school’s Science and Leadership program, as well as on standards-based curriculum on river chemistry and microplastics. So when McComb-Kobza invited her along to the hatchery in Alamosa, she leaped at the chance and the enthusiasm for the project never waned. So much so the school now has a NRDs club, she said.

The learning won’t stop now that the dace are in the water. Going forward, Reitzig said students will begin exploring what projects they can tackle to monitor the fish. Such efforts could include developing floating sensors to test pond pH and alkalinity levels and developing an artificial intelligence empowered camera to view the dace in the wild. The goal is to develop technologies and data science that can help inform Colorado Parks and Wildlife and Boulder County Parks and Open Space, he said.

Nyko dePeyer and his 32 students in the Innovation Center’s Applied Robotics classes, as well as an after-school group with six students and a teacher mentor from Westview Middle School, and about 10 students from Lyons Middle/Senior are already exploring such options. 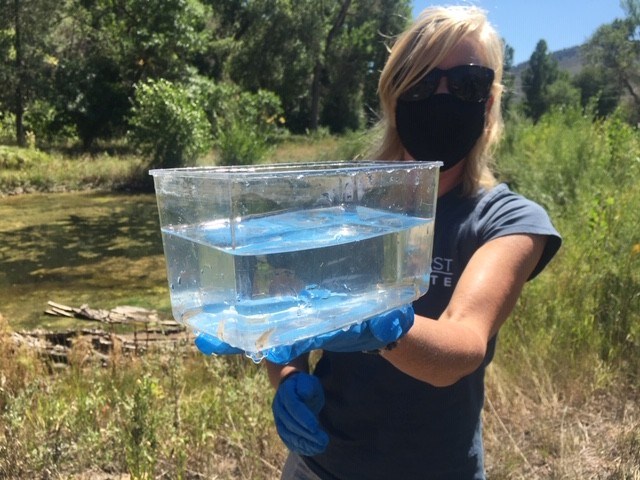 Mikki McComb-Kobza holds a small aquarium with a few of the 1,000 to 2,000 northern redbelly dace were released in a pond in Lyons on Tuesday. (Photo by Julie Baxter)
Further learning also could involve preservation/conservation projects for other species and broader education for the public and younger students. Such past efforts have included creating a Google Expedition and an educational comic book on the Sibinacocha Watershed Project, Reitzig said.

Kobza said he is hopeful those continued efforts also will include raising more NRDs.

“We’ll see if the schools can raise fish next year that we can put into Webster Pond. It’s nice to have lots of baskets to put your eggs, your fish eggs in,” he said, adding that with restoration efforts on the St. Vrain and Left Hand creeks, “we think the fish could take off on their own.”

Lyons students create, install wildflower garden to memorialize the COVID-19 pandemic
May 16, 2021 9:00 AM