Written by Erin Wuestenberg: This month we are proud to highlight Longs Peak Middle School (LPMS) teacher, Colin Rickman. Colin will be starting his ninth year at LPMS when school starts next month. Colin is no stranger to St. Vrain Valley Schools.
Aug 5, 2018 2:00 PM By: Longmont Observer 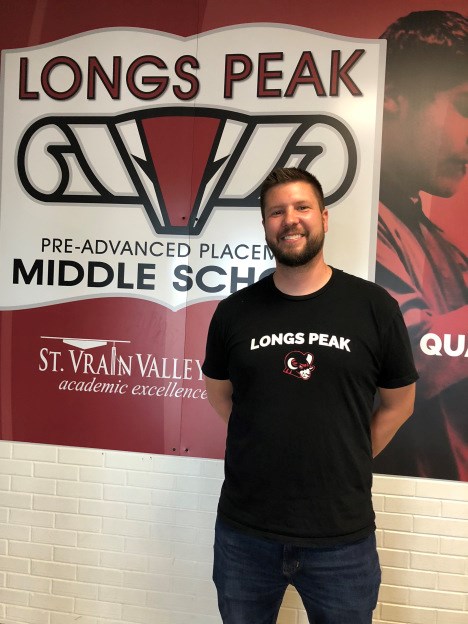 Written by Erin Wuestenberg: This month we are proud to highlight Longs Peak Middle School (LPMS) teacher, Colin Rickman. Colin will be starting his ninth year at LPMS when school starts next month. Colin is no stranger to St. Vrain Valley Schools. He grew up in Longmont and graduated from Longmont High School. He has family who were or still are teachers in the district as well. He jokes that he teaches at the middle school his wife attended and she teaches at the elementary school he attended.

Colin didn’t initially think he was going to be a teacher when he grew up. He attended CU-Boulder with a concentration on biological sciences, while training to be a physical therapist. I asked him what helped changed his view and what he wanted to do. He said two people influenced him. The first was a Spanish professor at CU that helped show him what teaching and education could be. The second was his wife. They had started dating while they were in high school and she was set on being a teacher. Colin said that listening to her talk about her classes with such passion and enthusiasm inspired him to switch fields. He was quick to mention that he looks up to his wife and she still is a source of inspiration for him. So he finished his Biology degree at CU and then started working on his education certification.

He completed his student teaching at Skyline High School and promptly took a job mid-year at a middle school in Lakewood. This was a pivotal point in Colin’s career. He discovered that middle school – not high school – fit is teaching style much better. Colin reflected, “I can focus on relationships as well as content. There is something special about a middle school student. They are still curious and love learning, and I can meet them where they are.” When an opportunity opened up to teach middle school at LPMS, he jumped at the opportunity and never looked back. He enjoys the neighborhood feel at LPMS – being part of the community. He believes that the entire staff is doing a fantastic job of reaching students where they are and can see a lot of growth because of systems in place to help student success. Colin showed a lot of pride when talking about his school and his co-workers. He is the type of teacher who can see the potential in each student.

In talking to Colin, you understand just how much he cares about each student and how fortune he feels to be teaching and giving back to the district that gave so much to him. We discussed the classes he teaches which range from basic STEM classes for sixth and seventh graders to advanced robotics. He smiles and says he wants to create classes he wished existed when he was in school. There is a quiet dedication to this line of thought. Colin is looking to keep advancing his classes and challenging his students. He is always looking for that next step to advance his students and their knowledge.

At this point I noticed a large ‘check’ on one of the walls. Colin is the 2018 Eleanor Venture Grant recipient. This grant is awarded every year to a teacher in the district with the purpose of helping them further their own education. I asked Colin to tell me a little more about the grant and what he was going to do with it. He is going to travel to Cape Town, South Africa and start creating and innovating. There is not a lot of curriculum for design challenges, so he has to write most of it himself. He is going to study something called “Day 0” which South Africa is predicted to hit in 2019. “Day 0” is the day Cape Town’s water supply is expected to be exhausted. Colin is going there to document the problem and bring it back to his students. He is hoping to instill empathy in his students as well as challenge them to come up with design ideas to address the water crisis in Cape Town or in their own backyard. While Colin is there he is also going to be documenting his trip with a 360° camera. He has a desire to get his students to explore their world, but realizes that they may not have that opportunity. So he is going to bring the footage back and have it run in the library’s virtual reality system so students can explore Cape Town in their library.

Colin’s passion is to see his students succeed beyond his classroom. He loves running to his former students and hearing about their success. He told me that he had taken his STEM Explorers Club to CU for the day and ran into one of his former students. Catching up with that student was a highlight for Colin.

With Artwalk Longmont chalk festival on the horizon, Illinois siblings' virtual travel could serve as inspiration
Jul 31, 2020 7:00 AM
Comments
We welcome your feedback and encourage you to share your thoughts. We ask that you be respectful of others and their points of view, refrain from personal attacks and stay on topic. To learn about our commenting policies and how we moderate, please read our Community Guidelines.