Community volunteers join in painting five canvases that will become one mural as part of Day of the Dead exhibit at Longmont Museum.
Sep 20, 2020 9:57 AM By: Matt Hagerman 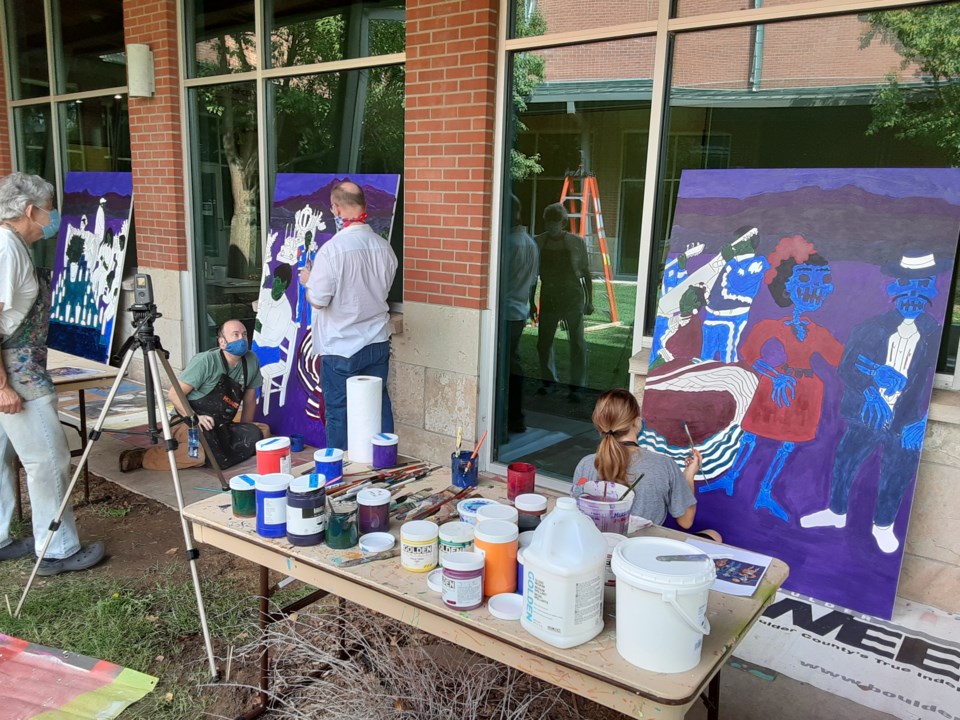 Artists work on five canvases in order to maintain social distancing at the Longmont Museum on Saturday. The pieces will eventually be joined to make a giant mural commemorating Dios de los Muertos. (Photo by Matt Hagerman)

The Longmont Museum was empty Saturday afternoon with only one quiet floor of displays open to the public. But outside, the courtyard was alive as Denver artist Tony Ortega mingled between five canvases, offering advice. A group of about 10 volunteer painters did their part to bring color and life to a giant mural celebrating the dead.

October will mark the 20th anniversary of Dios de los Muertos celebrations in Longmont. What began as an annual event at the museum grew to a city celebration that, according to a post on the museum's website, draws 8,000 people annually and is the largest and longest-standing Day of the Dead celebration in Colorado. This year, with the ever-present specter of COVID-19, the event will primarily be virtual.

“Through the years it’s just grown and grown as the population of Longmont has grown,” said Angela Brill, Longmont Art in Public Places administrator. “That's what Dios de los Muertos really is about. Celebration of community.”

This year will include a virtual opening ceremony and art kits children and adults alike can pick up at the museum. Some of Ortega’s pastels and etchings will be on display along with several altars celebrating the life of local loved ones who have passed away.

Volunteers have already filled the remaining slots offered by the museum next weekend to paint the sketches by Ortega and others on the mural. It is being constructed in five pieces before eventually becoming one giant mural that will be displayed downtown next month.

“We’re lucky that we have this museum and this courtyard and this dedicated staff that wants to continue this tradition,” Ortega said.

Ortega has collaborated on pieces in Longmont before, including a sandstone arch at a local baseball field in 2003 and more recent children's books with fellow artist Michael Campbell. Images from “A Migrant Child’s Dream” and others will be on display at the museum beginning next month.

“It becomes political because it’s about identity,” Ortega said as he looked at the unfinished mural. “It’s about culture that’s not considered a part of American culture, but it is. It’s been in the Southwest even before there was American culture.”

Jared Thompson, the museum’s curator of exhibits, said, “I think the imagery; people are just kind of fascinated by that. Longmont has a strong Latino community so it’s nice for them to come out and come to the museum and support that. Our membership has grown over the years. Having the auditorium now, and having more space for people to actually come in and use the museum.

“Normally, in the summer we do highly interactive, hands-on experiences. We actually shelved that for two years. Normally, Day of the Dead is up until mid-November but it will be up until January this year.” 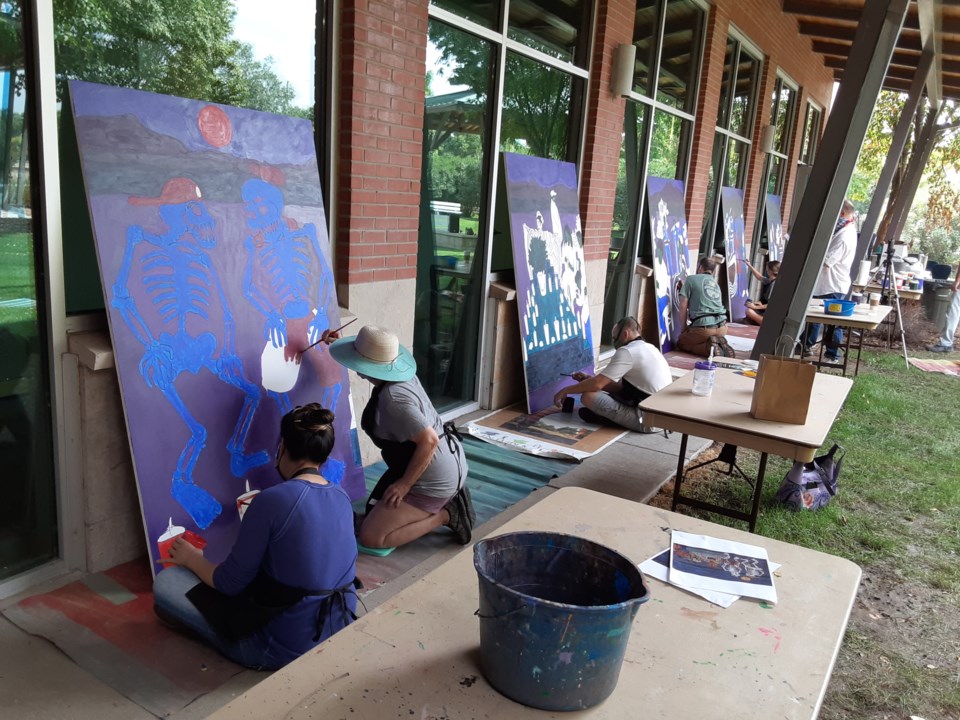 Artists work on five canvases in order to maintain social distancing at the Longmont Museum on Saturday. The pieces will eventually be joined to make a giant mural commemorating Dios de los Muertos. (Photo by Matt Hagerman)

Colorado poet laureate star of this week's virtual Thursday Nights at the Museum event
Oct 8, 2020 9:00 AM

Longmont Symphony returns with virtual season, starting with streamed Sunday show
Oct 5, 2020 12:00 PM
Comments
We welcome your feedback and encourage you to share your thoughts. We ask that you be respectful of others and their points of view, refrain from personal attacks and stay on topic. To learn about our commenting policies and how we moderate, please read our Community Guidelines.