Local take on late-night TV: The Longmonster debuts today during Thursday Nights at the Museum

A slight departure from the usual Thursday Nights at the Museum fare, today’s late night-style talk show will feature Longmont locals talking about what they do, how they do it, and what it means to be doing it here in Colorado.
Nov 5, 2020 3:25 PM By: Sheila Conroy 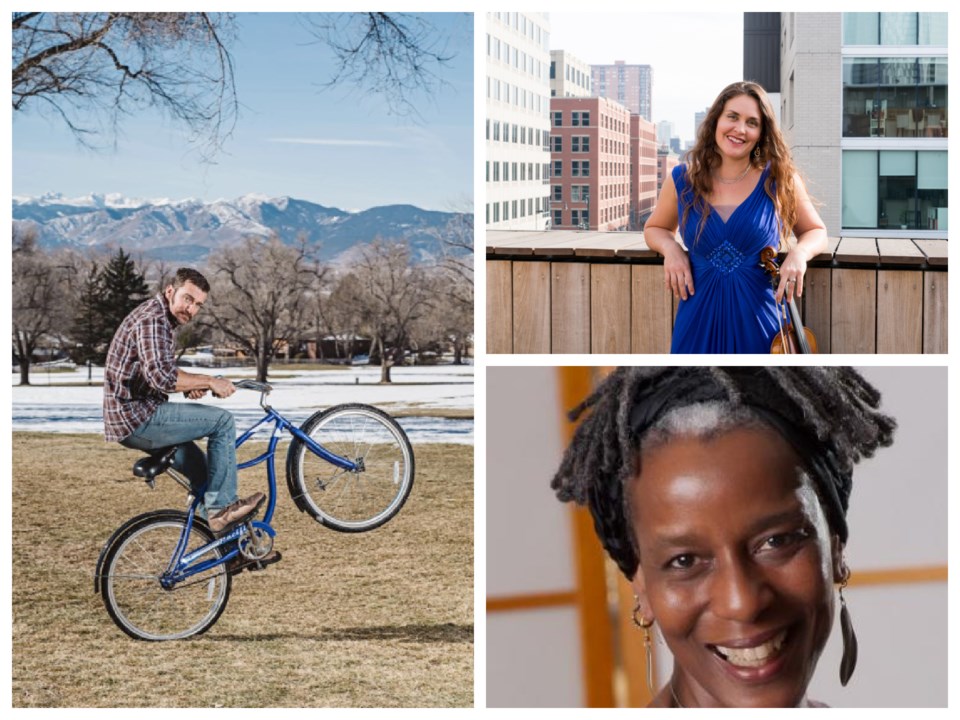 Clockwise from left, Peter Adeney, aka Mr. Money Mustache; Bridget Law, a founding member of Elephant Revival; and Norma Johnson, poet and performance artist, will be the featured guests for The Longmonster on Thursday, Nov. 5, 2020. (Photos courtesy of Michael Friberg, Meg O'Neill and Norma Johnson)

Bridget Law is unable to participate in tonight’s Longmonster event. Instead, Longmont favorite Patty Limerick will be on hand.

Limerick is faculty director and chair of the board of the Center of the American West at the University of Colorado, where she is also a professor of history. She has dedicated her career to bridging the gap between academics and the general public and to demonstrating the benefits of applying historical perspective to contemporary dilemmas and conflicts.

Limerick is also known as an energetic, funny, and engaging public speaker, sought after by private industry groups, state and federal agencies and grassroots organizations

A slight departure from the usual Thursday Nights at the Museum fare, today’s late night-style talk show will feature Longmont locals talking about what they do, how they do it, and what it means to be doing it here in Colorado.

The program is the premiere of what the museum hopes will be a long-running staple of its Thursday night offerings. The shows will be hosted by Justin Veach, manager of the Stewart Auditorium, and will feature a house band.

Mr. Money Mustache is the pseudonym of 46-year-old Canadian-born blogger Adeney.  He retired from his job as a software engineer in 2005 at age 30, and said he did so by spending only a small percentage of his annual salary and consistently investing the remainder, primarily in stock market index funds. Adeney, who lives in Longmont and writes the Money Monday column for the Leader, contends that most middle-class individuals can and should spend less money and own fewer physical possessions, which can lead to increased financial freedom and a decreased environmental footprint.

Johnson is a spiritual healer, writer-poet-playwright, performance artist, speaker and facilitator who brings a creative background to her racial justice activism. She is the author of a 2016 collection, “Poems for My White Friends,” and her poetry about race is used by educators across the country.

“ I didn’t set out to talk about race, much less to perform about it. But I did want to see us heal from it. Performance art has always been a creative way for me and Race, well … it was just there … like air,” Johnson states on her website, allinspirit.com.

Law, who was born and raised in Colorado, has said she loves the mountains and the music that hails from them. Playing fiddle has been her passion since youth. As a  founding member of Elephant Revival, which formed in 2006, she has toured extensively throughout the U.S., Canada and beyond. She also has shared the stage with such artists as Bela Fleck, Sam Bush, Lyle Lovett, Ani Difranco, Michael Franti, Little Feat, George Clinton, String Cheese Incident and Yonder Mountain String Band.

Law in 2017 stopped touring with Elephant Revival to focus on being an activist for women and other causes, and to spend more time with her husband, Tierro Lee, and his son, 303Magazine reported in a 2017 feature story.

The Longmonster will start at 7:30 p.m. and will be livestreamed on Facebook, Longmont Public Media and Comcast channels 8 and 880.

Inktober is over, but artists' creativity prompted by monthlong event soon to be on display at Firehouse
Nov 7, 2020 11:00 AM
Comments
We welcome your feedback and encourage you to share your thoughts. We ask that you be respectful of others and their points of view, refrain from personal attacks and stay on topic. To learn about our commenting policies and how we moderate, please read our Community Guidelines.