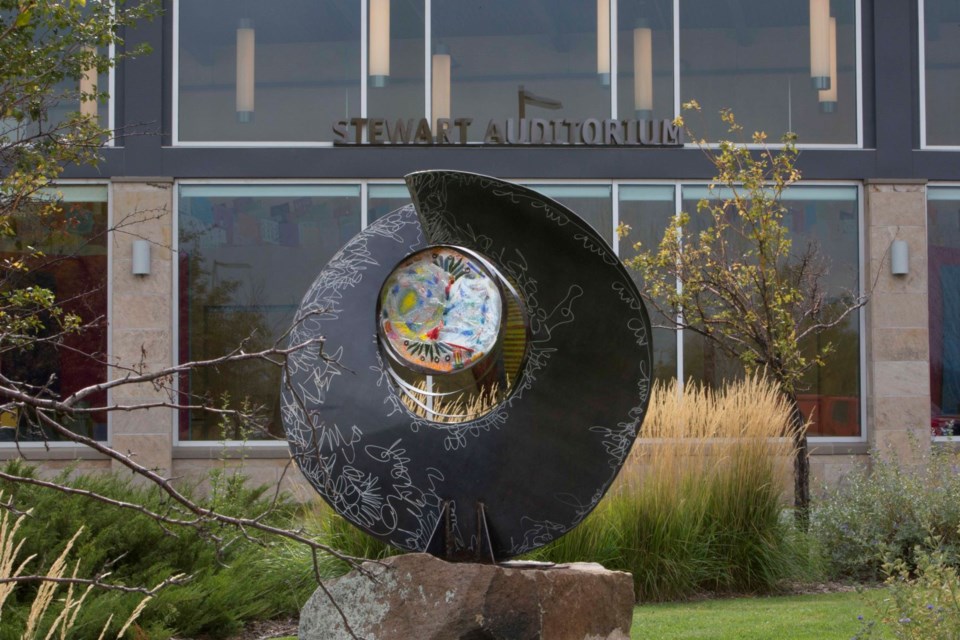 For a fourth year, Longmont Museum’s Stewart Auditorium will host the Boulder International Film Festival (BIFF) on March 1-3. An Opening Night Party is scheduled for Friday, March 1 at 5 p.m.

Now in its 15th year, the Boulder International Film Festival is a four-day celebration of cinema and the arts. Each year the festival engages more than 25,000 film connoisseurs, media and industry members.

The festival kicks off with the feature documentary "You Are Here: A Come From Away Story" at 3 p.m. on Friday, March 1. Producer Peter Gentile will be at the screening.

You can purchase tickets by calling the box office at 303-651-8374 or online by clicking the links in the descriptions below.

This year’s BIFF films screening at the Longmont Museum:

YOU ARE HERE: A COME FROM AWAY STORY
Friday, March 1, 3 pm
Canada, Feature Documentary, 2018, 84 min
Buy Tickets
This lovely feature documentary shows the big heart of the little town of Gander, Newfoundland, when 38 airliners carrying 7,000 passengers were forced to land at their airport after the terrorist attacks on 9/11. Although the Ganderites struggled with the dozens of new languages, they were ingenious in solving the huge logistical problems, like turning the hockey rink into a giant refrigerator.  Among other things, the film pulls back the emotional layers surrounding the five days that the community housed, fed and took care of the dislocated passengers (or the “come-from-aways” in Newfoundland parlance). This beautiful, feel-good film ends appropriately with the opening of the hit Broadway musical “Come from Away.”
Directed by Moze Mossanen
Producer Peter Gentile (in person)

THE WEIGHT OF WATER
Saturday, March 2, 12:15 pm
USA, Feature Documentary, 2018, 79 min
Award-winning filmmaker Michael Brown (Farther Than the Eye Can See, High Ground) returns to BIFF.
Buy Tickets
Making your first solo kayak run of the Grand Canyon is daunting, particularly if you are totally blind. Erik Weihenmayer has already overcome some stunning challenges for both sighted and blind people, including summiting Mount Everest. But whitewater kayaking is different; the water moves unpredictably, the rocks that make up the canyon walls are absolutely unforgiving, and the roar cuts Weihenmayer off from his guide’s voice and threatens his kayak. How will Erik react when disaster strikes on Lava Falls, the most dangerous rapid on the Colorado River?  The Weight of Water is the story of a blind man balancing fear in the midst of chaos, and the powerful desire to be free from a prison of darkness. Directed by Michael Brown
Michael Brown (in person)

ONE LAST DEAL
Saturday, March 2, 2:30 pm
Finland, Feature Film, 2018, 95 min
Finnish director Klaus Härö’s film The Fencer (BIFF 2015) was shortlisted for an Academy Award
Buy Tickets
Elderly Finnish art dealer Olavi still dreams of “one last deal” that will make his retirement comfortable. His dream appears to be answered at an auction preview where he spots an unattributed painting that could be worth a fortune. Olavi is a wily businessman, but his lifelong obsession with art has long ago alienated his family. Then, out of the blue, his grown daughter reappears, along with his moody teenage grandson Otto, an art student who needs an internship. Together, Olavi, with his vast contacts in the art world, and Otto, with his prodigious tech skills, become a dynamic art-detective duo. SUBTITLED
Directed by Klaus Härö

BE NATURAL: THE UNTOLD STORY OF ALICE GUY-BLACHE
Saturday, March 2, 4:45 pm
USA, Feature Documentary, 2018, 103 min
Narrated by Jodi Foster
Buy Tickets
Paris-born Alice Guy-Blaché was the world's first female film director. Before she pioneered the narrative film in 1894, movies were documentaries. She introduced dancing girls and romantic comedies. She wrote or produced more than 1,000 films, including some 150 with synchronized sound. She founded one of the first film studios in the US, but her success and accomplishments have been shockingly neglected for more than a century. Even worse, film historians have misattributed many of her greatest films to men. Pamela B. Green’s energetic film is a thrilling detective story, tracing how this brilliant founding artist was nearly erased from history and beginning Guy-Blaché’s reclamation. SUBTITLED
Directed by Pamela B. Green

SKID ROW MARATHON
Saturday, March 2, 7:15 pm
USA, Feature Documentary, 2017, 85 min
Winner of Best Documentary and/or Audience at 11 film festivals
Buy Tickets
Judge Craig Mitchell is the definition of inspirational. By day he presides over a criminal court for Los Angeles County but, by early morning, he trades his judicial garb for tennis shoes and running shorts as he jogs the darkened streets of LA among the people who call Skid Row home. He starts a running club comprised of homeless addicts, a recovering single mom and a paroled murderer who consider themselves among those least likely to succeed. As they train together to run in international marathons, they learn to dream big.
Directed by Gabriele Hayes, Mark Hayes
Judge Craig Mitchell (in person)

GENERAL MAGIC
Sunday, March 3, 10 am
UK/USA, Feature Documentary, 2018, 93 min
Buy Tickets
Everything that touches our daily lives, like social media, e-commerce and even emojis, had its original vision at General Magic, the most spectacularly successful business failure in history. In 1994, the company invented and produced the world's , which worked fine. But there was little demand, mainly because this was before the Internet, 3G Google: the world wasn’t ready to hold the world in its hands. General Magic failed big and messy, but its brilliant young engineers fanned out and literally changed the world—they invented the iPad, the iPhone the Android. And the company, remarkably, caught its rocketing rise and dismal fall all on video. This film is a tale of how great vision and epic failure can change the world.
Directed by Sarah Kerruish, Matt Maude

FIDDLIN'
Sunday, March 3, 12:15 , Feature Documentary, 2018, 96 min
Winner at 8 film festivals
Buy Tickets
The rollicking, foot-stomping heart of competitive bluegrass is the Old Fiddler’s Convention run by the Moose Lodge in Galax, VA. Sister filmmakers Julie Simone and Vicki Vlasic, returning to their Appalachian roots, were given permission to film the festival for the first time in its 80-year history because Lodge members remember the sisters’ grandpa. From multi-generations jamming in the parking to the ultra-competitive instrumental contests, we are to the folk roots of some of the greatest and most authentic bluegrass in America. And when the top 10 finalists are announced in the ultra-competitive guitar competition, we’re in for an exciting and unexpected musical climax. Fiddlin’ is a joyous celebration of Americana.
Directed by Julie Simone
Director/Producer Julie Simone, Producers Jill Mazursky and Vicki Vlasic, Executive Producer Rick Vlasic and Associate Producer Lynn C. Levy (in person)

RETURN TO MOUNT KENNEDY
Sunday, March 3, 2:45 pm
USA, Feature Documentary, 2018, 80 min
Buy
1965, Jim Whittaker, the first American to summit Mt. Everest, invited Senator Robert Kennedy to the highly publicized first ascent of a remote mountain in the Yukon named after the late president, JFK. Jim and RFK became great friends, and Jim gave the eulogy at Bobby Kennedy's funeral. Fifty years later, the sons of the original climbing team—Bob Whittaker, the former hard-partying road manager of Mud Honey and R.E.M, and Chris Kennedy, son of Bobby, embark on an expedition to climb the mountain for the 50th anniversary of the famous original climb, though admittedly, they are not in great shape. Featuring interviews with, and wild instrumentals by, Eddie Vedder, and never-before-seen footage of Robert Kennedy, this climbing film really rocks.
Directed by Eric Becker
Bobby Whittaker (in person)

THE BIGGEST LITTLE FARM
Sunday, March 3, 5 pm
USA, Feature Documentary, 2018, 91 min
Buy Tickets
When young urban foodie couple John and Mollie Chester get booted from their tiny LA apartment because of their barking dog, they leap into buying a run-down 200-acre-farm an hour north of the city. But the farm's soil is so depleted and drought-ridden that it will not even grow weeds, and John and Mollie know nothing about farming. So, they consult a Zen-farming expert named Alan York, who suggested a fantasy-utopian farm, one involving 70 different species of 10,000 fruit trees and 200 different crops, all laid out in Van Gogh whorls, with free-ranging animals like ducks, chickens and pigs to fertilize the soil. When the farm’s ecosystem finally begins to reawaken, so does the Chester’s hope. But as their plan to create perfect harmony takes a series of wild turns, they realize that to survive they will have to reach a far greater understanding of the wisdom of nature, and of life itself.
Directed by John Chester