Longmont resident's new album dropping on Christmas all about 'freedom'

“The one emotion I wanted to convey in the album, especially in the title track ‘Bird of Paradise,’ is this feeling of freedom, feeling of escape and just liberation. I think it just comes back to what music is for me. The handpan has always been this escape and this freedom for me,” Mark D’Ambrosio said.
Dec 24, 2020 9:05 AM By: Macie May Harnessing a love for drumming and music instilled at a young age, Longmont resident Mark D'Ambrosio on Christmas Day is set to release an all-acoustic version of his first album, “Bird of Paradise.”

D’Ambrosio grew up on the Front Range, between Loveland and Fort Collins. He traveled across the mountains to attend Colorado Mesa University in Grand Junction, where he graduated with a degree in music performance.

Missing home and wanting to make a career for himself in music, D’Ambrosio settled in Longmont in 2019.

“I started playing a drum set when I was 8 or 9 years old. I really took to it right away. I really loved it. I loved playing along to classic rock songs and I was learning as much as I could,” he said.

D’Ambrosio’s passion for music only grew stronger throughout school, where he played in various bands in and out of school, and worked on several music projects.

Since graduating from college in 2018, D’Ambrosio has been a music freelancer, a performer and a teacher.

While D'Ambrosio will occasionally take on a project with other musicians, he is primarily a solo artist who enjoys playing the handpan. Taking to the instrument naturally allowed him to “sprout and make my own compositions and to have my own voice in music,” he said.

“The basic form of a handpan consists of two metal half-shells glued together, a centre tone field (named Ding) surrounded by a circle of at least seven tone fields on the upper side and an opening in the bottom side (named Gu),” according to Wikipedia.

D’Ambrosio discovered the instrument in 2013 and said he was instantly drawn to it.

“If you have ever heard handpan music it is melodic, it’s beautiful and you can compose melodies with it,” he said.

In 2015, D’Ambrosio started work on his first album “Bird of Paradise.” It has been a work in progress over the years.

“I just really wanted to get it right,” he said.

When the pandemic hit, D’Ambrosio found himself with a lot more time after canceling gigs, music lessons and travel. He asked himself, “How do I make the most of this time?” He decided it was time to finish the album. He thought to himself, “If I don’t get through the pandemic without finishing this album, I might as well call it quits.”

As fortune would have it, D’Ambrosio a few years ago met Tad Michael Wheeler, recording engineer, producer and owner of Tenderdyn Arts Studios in Castle Rock, when Wheeler was exploring the handpan. Tenderdyn Arts is located inside Wheeler’s home and he has been selective about the artist he allows in to record this year. 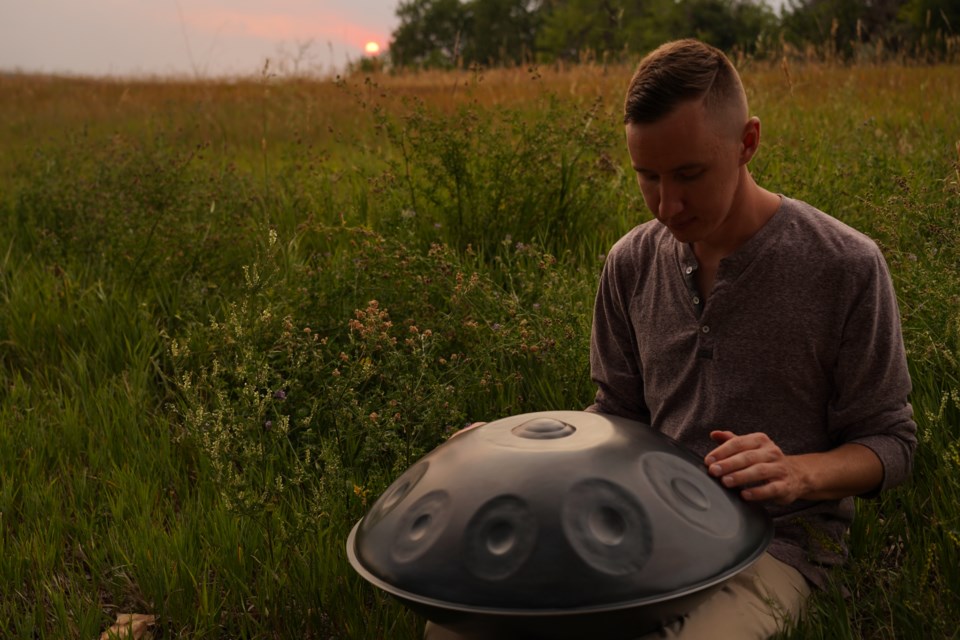 Longmont musician Mark D'Ambrosio with his handpan. .Courtesy of Mark D'Ambrosio
While Wheeler has played around with the instrument he doesn’t feel he is proficient with it.

“When I heard Mark play I went ‘Oh! So that is how you play this instrument.’ And so I reduced myself to being the producer and the recording engineer rather than a player on that instrument. It’s like any instrument, it takes years of playing it to know how to express yourself through it. Mark is just exceptional at doing that. It was a privilege to record,” Wheeler said.

The duo recorded the album in June and July and released nine-track “Bird of Paradise” on Oct. 26.

“I just wanted it to be an explosion of different emotions, different genres, elements, colors and music. I was really happy with how it came out. It spans everything from elements of world and folk music to very meditative acoustic handpan music,” D’Ambrosio said.

The acoustic, live-album version of “Bird of Paradise” being released on Christmas Day was recorded at The Tank Center for Sonic Arts, or  “The Tank,” a seven-story Corten steel water tank in Rangley built in the 1940s.

The Tank is known for its resonance and reverberation.

“I’d never heard anything like it,” Bruce Odland said after locals showed him the space, according to The Tank’s website. “I’d never heard a sound last that long, with these dizzyingly beautiful reverberation effects going all over the place.”

“For years after Odland’s discovery, The Tank became a secret performance and recording space for a dedicated group of sound artists and musicians,” according to the website.

D’Ambrosio said, “I was taken by the sound. It was like nothing I had ever heard.”

He recorded eight tracks from the “Bird of Paradise” album, along with videos, with the help of his friend Nick Shields, a videographer in Colorado Springs.

“The one emotion I wanted to convey in the album, especially in the title track ‘Bird of Paradise,’ is this feeling of freedom, feeling of escape and just liberation. I think it just comes back to what music is for me. The handpan has always been this escape and this freedom for me,” D’Ambrosio said. Longmont musician Mark D'Ambrosio is releasing an acoustic version of his album "Bird of Paradise" on Christmas Day 2020. Courtesy of Mark D'Ambrosio