With Artwalk Longmont chalk festival on the horizon, Illinois siblings' virtual travel could serve as inspiration

As plans are being firmed up for a Longmont chalk art festival in September, would-be artists and young neighborhood Picassos can turn to a 14-year-old girl in Illinois for a bit of early inspiration.
Jul 31, 2020 7:00 AM By: Deborah B.G. Kelly 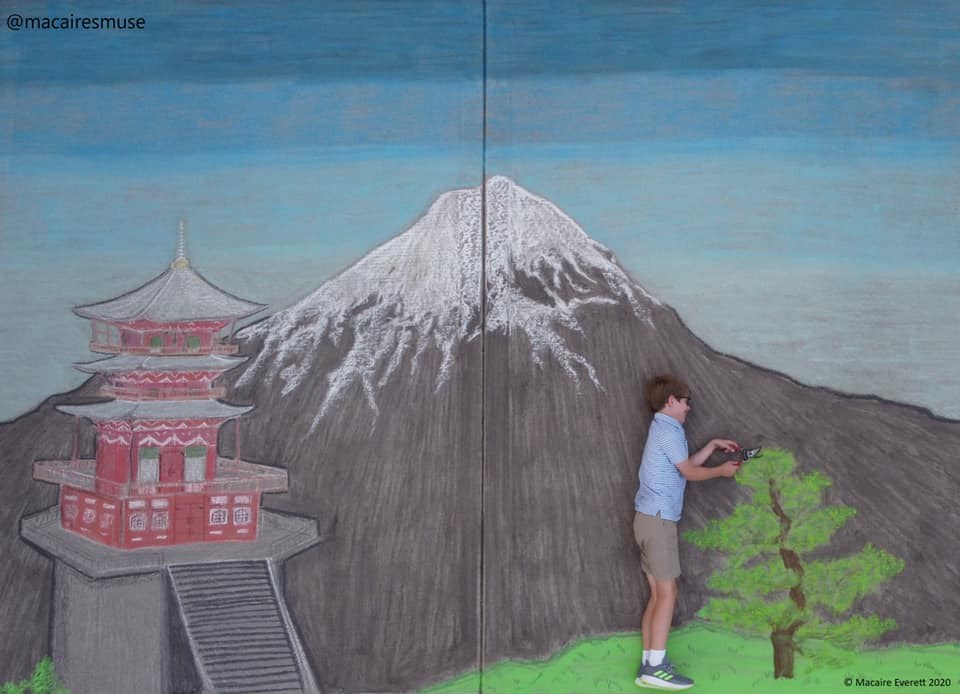 As plans are being firmed up for a Longmont chalk art festival in September, would-be artists and young neighborhood Picassos can turn to a 14-year-old girl in Illinois for a bit of early inspiration.

Macaire Everett’s quarantine chalk art and the travels she and her brother are taking from the driveway are making the rounds on social media, including on one local moms’ Facebook page.

"It was really cool to see how he could go places without leaving our driveway," said Macaire, who started creating the drawings to entertain her little brother, 9-year-old Camden.

The duo has been traveling the world via the chalk art, with Camden making guest appearances in photos posted to social media. Their mom, Christine Everett, said, "They found their own passport."

Macaire said she didn't begin drawing much until the coronavirus pandemic and resulting restrictions on activities came about. "I wasn't that into art," she said.

So, how did it all begin? Boredom.

"We were bored. Nothing to do but schoolwork. We went out in the garage one day, and I just decided to pick up some chalk. The first drawing was balloons, but the rain washed it away,” Macaire said.  “The neighbors really liked it, so now the pictures keep getting bigger, better, more fun. The pictures that Cam's been in have been much more adventurous." 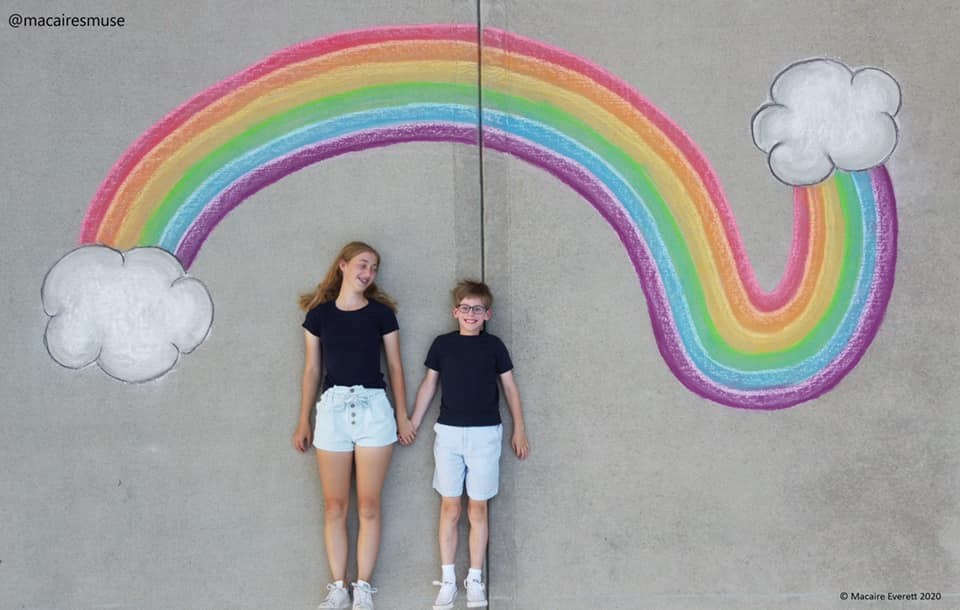 Macaire and Camden Everett with one of Macaire's chalk art drawings.(Photo courtesy of Matthew Everett)

School canceled. Spring break canceled. It's easy to get down when all of that happens.

The family, especially Camden, was having a tough time dealing with having to miss spring break travel.

"We couldn't go on spring break. That was really hard for all of us, especially Camden. He loves going to new places,” Macaire said. “That's when we started the travel pictures. When we did the 100 days in a row, it was really fun for him."

The most recent excursion was to Mt. Fuji, Japan. But, shortly before that, Cam went to Mexico.

"Mexico has been a regular request — from people in Mexico. They love seeing their own country in drawings. I've been there. They love it when they see that. We've also gotten requests from Argentina, Canada, and Ireland, as well as many others," Macaire said. 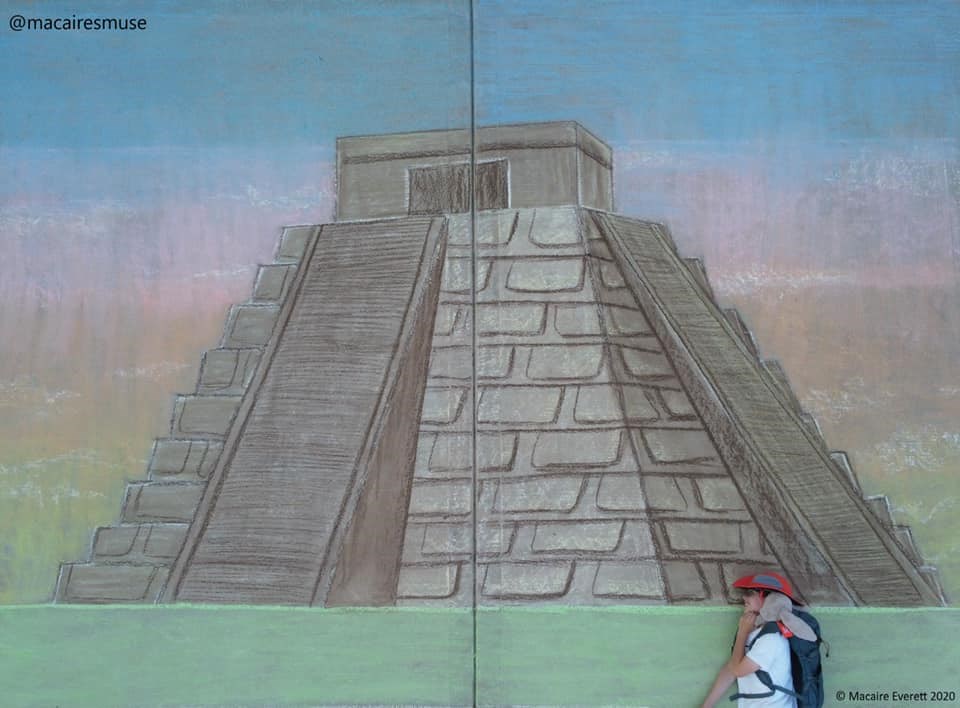 Even if Macaire's work can’t be seen in person in Longmont, it might serve as inspiration for the Longmont Main Street Chalk Festival, which will be from 10 a.m. to 2 p.m. Sept. 5. as part of the Artwalk Longmont Summer on the Streets series.

Elaine Waterman, executive director for the Firehouse Art Center, said she wanted to bring the chalk art festival back (one was done in 2017) "because it's a perfect representation of art plus community. The artist working on the chalk square is immersed in the community since there are people there watching them. The community and the viewer are very much together."

Waterman said she wants the festival to showcase the community's strength.

"I wanted to show that even though we're going through the pandemic we can come together as a community in Longmont. It's a way to recognize that the world is changing, but we can still celebrate art and community," she said.

Artists interested in participating in the chalk art festival can email info@firehouseart.org. Those selected to participate will be notified by Aug. 15 and will receive a pastel set to use for their work as well as a $20 stipend.

Participating artists also will be entered into Jury and People’s Choice judging, and the winner of each will receive a $100 Visa gift card. The People’s Choice winner will be named based on likes on the ArtWalk Longmont Facebook and Instagram pages, where all works will be featured. Voting will close on Sept. 11, with winners announced at 7 p.m. Sept. 12 during the final Summer on the Streets event.

Since COVID-19 put a wrench in the yearly Longmont Artwalk festivities, the event has pivoted to the weekly Summer on the Streets mini art festivals. Artwalk typically draws around 5,000 people, Waterman said. The smaller Saturday events allow for safer crowd sizes and easier social distancing, she said.

Firehouse Art Center puts out call for Summer on the Streets volunteers
Aug 4, 2020 7:00 AM

One 19th-century artist's effort to grapple with tuberculosis resonates during COVID-19
Aug 3, 2020 12:00 PM
Comments
We welcome your feedback and encourage you to share your thoughts. We ask that you be respectful of others and their points of view, refrain from personal attacks and stay on topic. To learn about our commenting policies and how we moderate, please read our Community Guidelines.