Longmont’s Left Hand Brewing Company is taking a “sinister” turn towards whiskey.
May 22, 2021 7:00 AM By: Matt Maenpaa 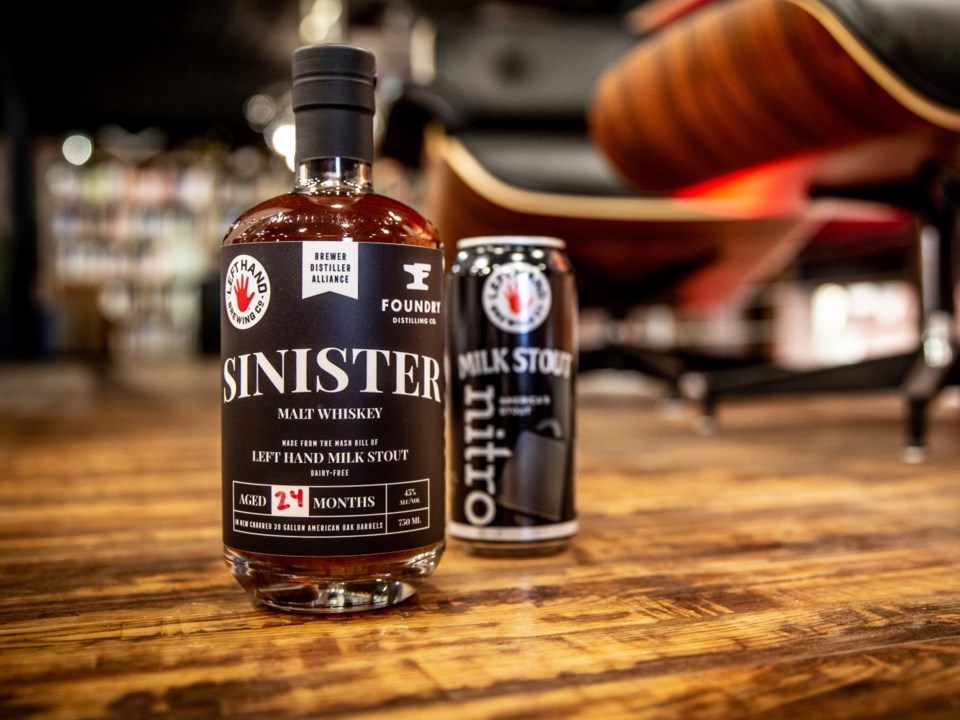 Sinister is the name of a new single-malt whiskey made by Foundry Distilling Company in Iowa, in collaboration with Left Hand Brewing Company. The whiskey was made from the same base as Left Hand’s popular Milk Stout Nitro, which inspired Foundry to reach out.

The initial process of making beer and whiskey share a lot of similarities. Grains and malts are heated for an extended period of time in water to extract sugars, producing a liquid known as wort. Yeast is added to the wort to start the fermentation cycle that will eventually produce alcohol. Brewers also add agents like hops to produce a unique character during the brewing process.

A wort fermented for distillation is referred to as a wash, and whiskeys are subject to strict regulation by the Alcohol and Tobacco Tax and Trade Bureau, or TTB, to determine the type and classification of distilled spirit.

“For this first release, the grain bill is heavily inspired by Milk Stout Nitro, and we delivered our wort to them to use as wash,” said Kristina Hernandez Schostak, communications manager for Left Hand Brewing Company. “This took place before the fermentation process and the addition of lactose, so this whiskey is dairy-free.”

The wort for the Sinister Single Malt Whiskey was shipped from Longmont to Valley Junction, Iowa by the truckload, where it was fermented, distilled and aged by Foundry Distilling owner Scott Bush and his team. The whiskey aged for two years in charred oak barrels before being released into the world.

“Left Hand’s Milk Stout is one of the most lauded beers in the industry,” Bush said in a press release. “We were very intrigued to see what kind of flavors we could produce by making a whiskey from this mash and excited by how much of the beer character came through in the finished whiskey.”

“Taking that same grain bill and transforming the recipe for a world-class beer into a world-class whiskey was a satisfying experience,” said Jeff Joslin, Left Hand’s director of brewing operations, in a blog post. “Notes of chocolate and vanilla still prevail, and the wood aging added a delicate yet complex array of dried fruits and caramelization with just a hint of spice.”

With the length of time for a whiskey to age properly, Left Hand Brewing Company and Foundry Distilling Company put plans in motion years ahead of a release.

“Scott originally approached us with Milk Stout Nitro in mind and we've been in discussions for brands from there. Galactic Cowboy, Fade to Back and Sawtooth Amber Ale are the next whiskeys in the lineup to debut over the coming years,” Hernandez Schostak said.

This isn’t the first time that Left Hand’s beers have been turned into a distilled spirit.

“We have done a few projects with Abbott & Wallace, the latest being Tiny's Oktoberfest. Our Fade to Black limited batch was incredible,” Hernandez Schostak said. “We are always open to new projects and love working with our talented local businesses for these truly unique and delicious distillates.”

Due to restrictions in alcohol sales and liquor license, Left Hand Brewing is not pouring the Sinister Single-Malt at their Longmont taproom. Bottles of the collaborative whiskey can be found in liquor stores throughout the state, including PJ’s Wine & Spirits and Wyatt’s Wet Goods.