The local loans are among nearly 4.9 million given nationwide totaling nearly $521.5 billion as of June 30, per the Small Business Administration.
Jul 9, 2020 1:50 PM By: Julie Baxter 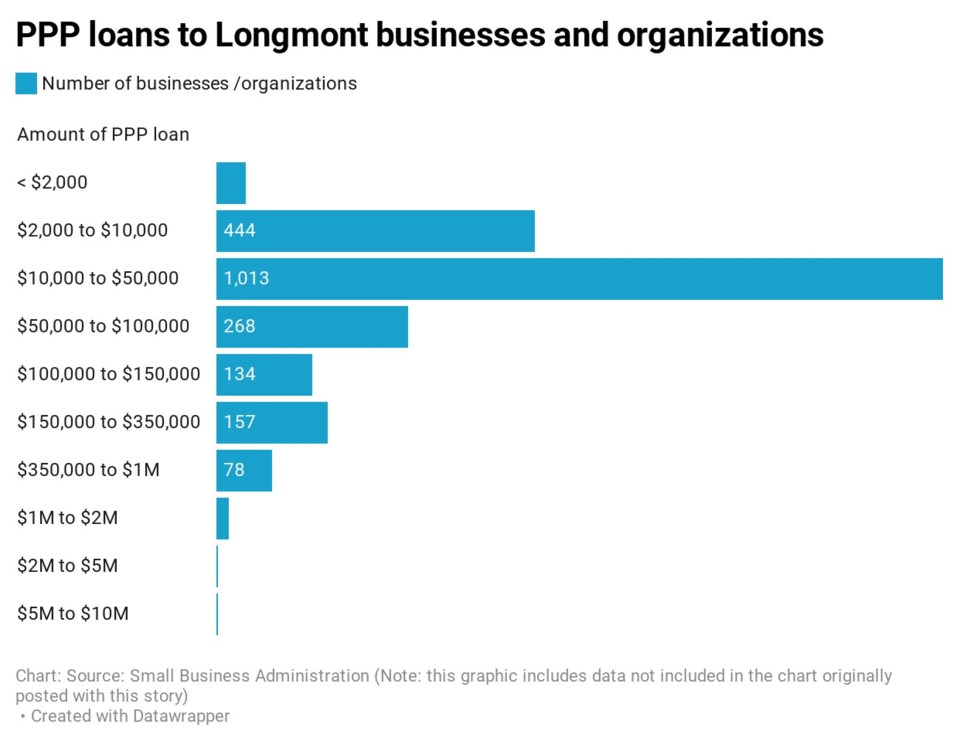 Editor’s note: This story has been updated to include additional data on PPP loans under $150,000.

More than 2,100 Longmont businesses received Paycheck Protection Program loans to retain a combined 10,533 jobs, according to data released Tuesday by the Small Business Administration, which oversees the program.

Those loans are among nearly 4.9 million given nationwide totaling nearly $521.5 billion as of June 30, according to the SBA.

The size and focus of local businesses and organizations awarded PPP loans varies, according to the SBA. The number of local jobs retained because of the funding ranged from none reported at bank and insurance company branches to 315 at Ward Electric Co.

The amount of money received fell in ranges of less than $2,000 to $5 million to $10 million at Ward Electric.

“The Paycheck Protection Program is a loan designed to provide a direct incentive for small businesses to keep their workers on the payroll, according to the SBA, which “will forgive loans if all employee retention criteria are met, and the funds are used for eligible expenses.”

The loans are intended to cover up to eight weeks of payroll costs, including benefits, according to the SBA.

Last week, The deadline to apply for PPP loans was extended from June 30 to Aug. 8, and more than $130 billion in funds remain unused, according to CNN.

Longmont United named to Newsweek's list of Best Maternity Care Hospitals
Jul 25, 2020 12:30 PM
Comments
We welcome your feedback and encourage you to share your thoughts. We ask that you be respectful of others and their points of view, refrain from personal attacks and stay on topic. To learn about our commenting policies and how we moderate, please read our Community Guidelines.