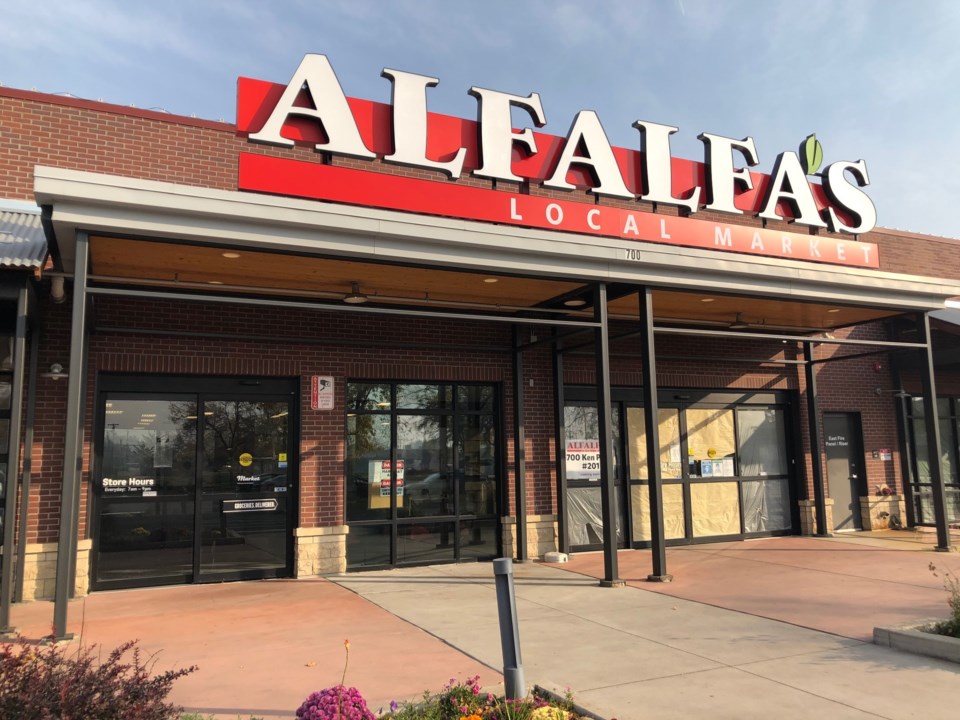 The Alfalfa's Market at 700 Ken Pratt Blvd. will close on Tuesday. (Photo by Deborah Cameron)

Longmont’s Alfalfa’s Market is closing Tuesday, bowing to the economic pressures exerted by the COVID-19 pandemic.

The store opened Oct. 30 at the former Lucky’s Market space at 700 Ken Pratt Blvd., and boasted a minimalist design with a focus on food, a full-service coffee bar and a fresh juice counter.

Alfalfa’s management also said the store would bring more than 4,000 Colorado products to the area, including many local brands that would be placed alongside national brands on store shelves. Meats from Buckner Family Ranch were going into the store, along with selection from Sascha’s Spices, Kilt Farms and Ollin Farms, according to the company.

“We acquired and reopened this store in 2020, during the height of the pandemic,” according to a company statement that came via email. “With people staying at home, using online grocery services and maintaining established routines, the timing of the store opening made it difficult to attract customers to this location.”

The company will focus its energy and resources on Alfalfa’s Louisville location, the statement said. “We appreciate our employees and customers, and we hope to serve our loyal supporters from our Louisville store.”

Friday’s announcement was posted on the Longmont store’s Facebook page and was met by disappointment from frequent shoppers.

“I’m not surprised since there were always so few shoppers whenever I went in,” Deborah Meyers Coccoli said in comments on the post. “I’m sad because the workers there were great & it was easy in and out.”

Naomi Curland posted she was “... saddened by the news. Alfalfa’s Longmont has been our go-to grocery store since it’s opening, and I wish more folks had given it a try.’’

Company officials in February announced that Alfalfa’s flagship store in Boulder at 1651 Broadway would close after almost 38 years of existence.

Alfalfa’s president Mark Homlish told BizWest the Boulder store’s cafe and prepared-foods department has been shuttered since the start of the pandemic as it catered to preparing meals for Boulder High School, the University of Colorado Boulder and various local businesses. Those operations contributed about a third of the store’s revenue in normal times, Homlish told BizWest.

“It’s a landmark in Boulder in a lot of ways, and we’re disappointed we couldn’t make it work,” he told BizWest. “It’s an expensive location, and COVID affecting our sales just exacerbated that.”

Homlish at the time told BizWest the two stores in Longmont and Louisville had some decline in foot traffic during the pandemic but not enough to warrant closure.