Despite the lack of clarity, two Black business owners and others in the community believe the intention will not fade even as the nationwide summer protests and rallies focused on racial equity and justice fade from day-to-day conversation.
Feb 21, 2021 7:30 AM By: Lauren "Lav" de Leon 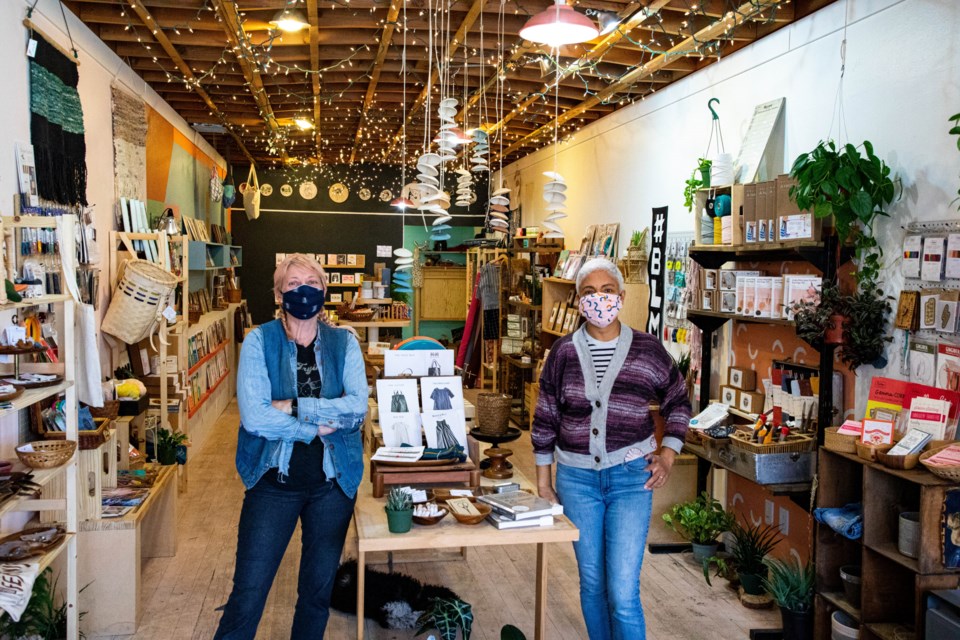 Stephanie Sterling and Julie Benoit, co-owners of Maker General in the Main Street store. Matt Maenpaa / For the Leader

This summer, as people nationwide protested the death of George Floyd while in Minneapolis police custody, calls for action arose to support Black lives and Black-owned businesses.

“The death of George Floyd really propelled people to really look deeply at themselves and their organizations thinking, are we really doing the best job as far as equity and inclusiveness?,” said Eric Hozempa, executive director of the Longmont Community Foundation.

A number of ways to support Black-owned businesses emerged last year, ranging from Google adding a feature on its shopping tab to identify them, cosmetics giant Loreal partnering with the NAACP to launch a grant program, and cities across the country creating support efforts.

Has that momentum carried on in the months since? The owners of two Boulder County businesses, Maker General and Ras Kassa’s Ethiopian Restaurant, said the coronavirus pandemic has made it hard to tell. However, that hasn’t stopped them from opening up the dialogue about race, representation and racism, or from offering opportunities to create broader cultural awareness.

And they, and others, believe the intention will not fade even as the nationwide summer protests and rallies focused on racial equity and justice fade from day-to-day conversation.

“I think we will be able to sustain interest in the viability of Black-owned businesses. There’s things to be done to raise visibility and also voices, in order to sustain, in order to keep it going you have to work with the momentum and keep it going,” said Jude Landsman, economic opportunity chairman of the Boulder County NAACP. “That remains to be seen how best we can make that happen, but I do think we can make that happen in our community.”

Stephanie Sterling, co-owner of Maker General, one of 12 Black-owned businesses in Longmont according to the Boulder County NAACP, said, “It seems like Longmont is becoming more diverse, so maybe this is something that will stay at the forefront of people’s minds. And certainly across the country, it’s an unresolved issue. Maybe it’s a trend, and maybe it’s a trend that doesn’t kind of fade out. You know, trends can be enduring, too.”

Maker General acts as a “community hub at the intersection of craft and social justice,” said co-owner Julie Benoit.

Sterling said, “We live here and being a part of the community and wanting to bring this to the community is sort of the impetus for putting Maker General on Main Street, rather than anywhere else.”

Maryland natives, Sterling and Benoit moved to Longmont six and four years ago, respectively, and decided to combine their passions for crafts, art, community and allyship.

“It’s nice because our community extends beyond Longmont. People will find us as a place and they feel comfortable from Denver, from Broomfield, they’ll come up for the day,” Sterling said. “You know you’re going to come in and be able to talk with someone and feel welcome.”

During a pro-Trump rally in Longmont, one customer from out of town came in to seek a safe space after seeing Maker General’s “Black Lives Matter” banner in the window, Benoit said.

Maker General carries an array of products for crafting from fabric to embroidery kits. Its products also are chosen with racial diversity and representation in mind. Sterling and Benoit are creating DIY stitch kits representing prominent figures from Black, Indigenous, and communities of color such as Stacey Abrams, who mobilized voters in Georgia and helped flip the state from a Republican to Democratic majority in the 2020 presidential election.

Sterling and Benoit also contribute a portion of their profits to causes supporting BIPOC communities.

“We give back 5% to the Colorado Freedom Fund,” Benoit said. The fund raises money for those in jails across who cannot afford to pay their bail.

“If we find there’s another organization ... that needs donations, then we’ll kind of switch and move in that direction,” she said.

Tsehay Hailu, owner and chef at Ras Kassa’s Ethiopian Restaurant in Lafayette, said it’s not easy to fully understand how business has changed in relation to calls for allyship as the coronavirus pandemic continues. However, she still sees her restaurant as a “cultural cross.”

“It’s something different that you could try. And especially when you’re eating with your fingers, sitting together with your friends and family, the feeling of togetherness that brings a moment of happiness,” Hailu said.

Born in Addis Ababa, Ethiopia's capital, Hailu moved to Boulder with her husband more than 30 years ago after being awe-struck by the mountain view from U.S. 36 during a drive to California. “That was it, I have never left since,” she said.

After moving to Lafayette in 2016, Hailu continued to share her culture with Boulder County residents. Still, Hailu said Ethiopian food is not usually people’s first choice when it comes to eating outside of one’s own culture.

Despite that, Hailu said the reason she is still here is because of those who come in and take part in the cultural experience of eating at Ras Kassa’s

“You can see it in their faces and that's a great reward. ... I mean, this food is not for everybody, but for the ones who tried it, and who come and appreciate it, to see that and cook the food, what else could you do to make anybody happy? It changes your life,” she said.

Pre-COVID, customers were able to come into the restaurant and sit together, being served on traditional Ethiopian mesobs.

“The best part of it is that you're sharing, you're eating what you order with your friends and your family,” Hailu said, adding she can’t wait until the pandemic passes so people can again share a meal and an experience.

Landsman of the Boulder County NAACP, said such cultural experiences can help lead to greater understanding of the barriers Black communities and Black business owners have historically faced.

“I am a believer in reparations and I think there’s well-documented evidence that there has been harm done economically, educationally, justice-wise, in all areas and not just nationally, not just in the South, but right here in Boulder County,” he said. “Policies that created hardships and unequal situations for Black business owners, for people working their way in getting employed.”

The Community Foundation’s Hozempa said he has high hopes that diversity and inclusion will continue to be a focus in the community well beyond this year.

“I think you’re going to see that need and desire to be as inclusive and as diverse (as possible) really flourish,” he said.

Landsman said, “I think we will be able to sustain interest in the viability of Black-owned businesses. There’s things to be done to raise visibility and also voices, in order to sustain, in order to keep it going you have to work with the momentum and keep it going. That remains to be seen how best we can make that happen, but I do think we can make that happen in our community.”

A list of Black-owned businesses in Boulder County compiled by the NAACP is available here.

BrewHop Trolley celebrates half a decade in Longmont
Jun 8, 2021 10:00 AM
Comments