Longmont Local: A chiropractic practice extends to another generation — and into Longmont

A community chiropractic practice that’s seen much growth through the decades is poised for more change.

The younger Ehrmantraut graduated in November. His commencement came 32 years after his father’s from the same chiropractic school in Minneapolis. However, the career wasn’t something into which his father pushed him.

“I kept trying to talk him into working in physical therapy because it’s a practice that’s easier; it has more acceptance from the mainstream medical community,” David Ehrmantraut said. ”Then one day, Josh came to me and said he wanted to be a chiropractor because I seemed so happy doing what I was doing. It’s such a good memory in my head.”

While Josh Ehrmantraut emulates his father, he said patients might see some intentional differences in his approach.

“I haven’t met anyone who comes through the door who doesn’t like him. I want to be that kind of doctor. I don’t want to say, ‘I’ve adjusted you, go on your way.’  Then I want to build on this by adding some things I’ve learned,” he said.

When pressed, Josh Ehrmantraut elaborated on the differences.

“I’ve learned a lot about rehab and doing exercises that help balance muscles. I feel like these would be great additions,” he said.

For several years, Longmont resident Joe Chughtai has been one of David Ehrmantraut’s regular patients. He said he appreciates the genuine approach to health he finds in the practice.

“He’s super caring,” Chughtai said. “He’s one of those kind of guys who tells you to call anytime if you need something. Weekend and off-hours contact is no problem.”

Chughtais isn’t the only person in his family to go to the practice. His mother, Marla, who has since passed away, was a patient more than 20 years earlier. David Ehrmantraut said she was one of the drivers for his move to Old Town Erie in the early ’90s.

Now Chughtai’s wife, Rachelle, also is a patient and he eagerly shared how she benefitted from David Ehrmantraut’s care.

“She was experiencing jaw popping, and the oral surgeon said she would need to experience a jaw-breaking procedure to fix it. Instead, she saw Dr. Dave three times, and he stopped her popping. No surgery needed,” he said.

It is this feeling of connection and effective care both father and son are looking to maintain at the Longmont office. When working there, Josh Ehrmantraut will be part of a team of practitioners that includes his father part time, another chiropractor, and two massage therapists. The pair also is celebrating the new office with a $27 special through Feb. 18.

Over the years, both Ehrmantrauts hope the practice fills the same role as its counterpart in Erie.

“I want to see everyone succeed. I want to help as many people as I can in Longmont,” Josh Ehrmantraut said. 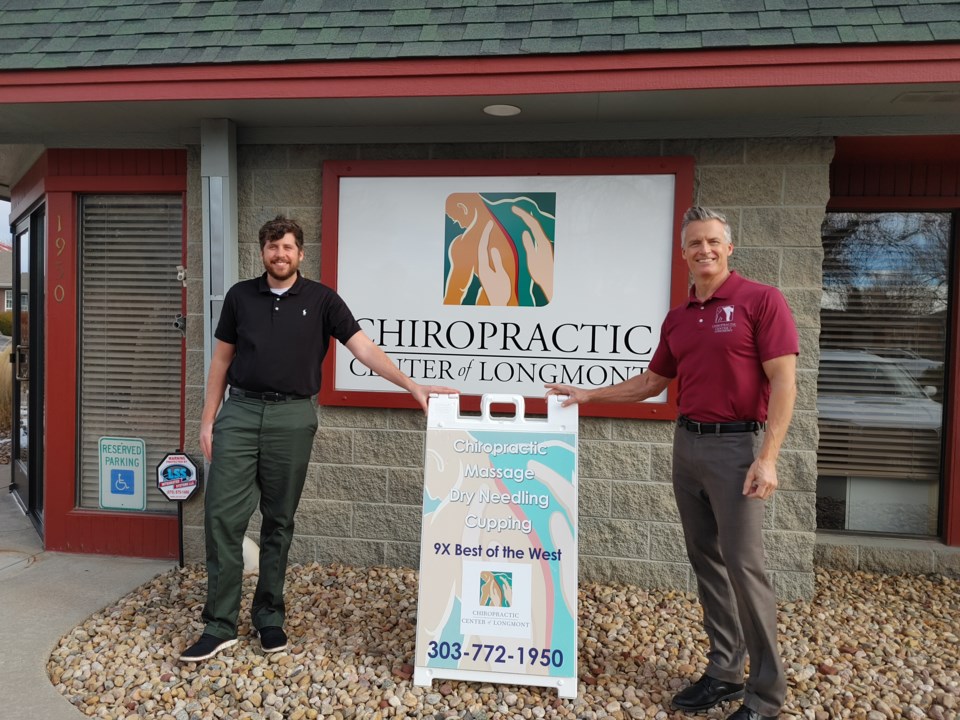