Until taproom occupancy restrictions lessen, trolley riders who want to enjoy being taken from brewery to brewery need to reserve a chartered ride. David Lewis will then create a specialized itinerary, calling ahead to reserve seating.
Deborah Cameron Feb 15, 2021 9:00 AM

Longmont is lucky enough to have a range of breweries from nationally distributed mega brands to smaller, community-focused businesses. Four-plus years ago, Longmont’s BrewHop Trolley was created to increase access to all of them.

“We saw that there were a number of breweries popping up here,” David Lewis said. “We wanted to support all of them and to give people the chance to visit ones they didn’t even know existed.”

Once it was put into action, the trolley settled into a service routine and added a few non-brewery stops. For a $20 ticket ($15 on Sundays), riders got on or off the trolley at locations including 300 Suns Brewing, Wibby Brewing, The Pumphouse Brewery, Longs Peak Taphouse, Grossen Bart Brewery, Dry Land Distillers, St. Vrain Cidery, Abbot and Wallace Distilling, Bootstrap Brewing, Left Hand Brewing, Shoes and Brews, and Oskar Blues' Tasty Weasel Taproom.

“The trolley adds an awesome, fun business to the Longmont beer scene. We love being part of the route because they bring craft beer enthusiasts right to our front door,” said 300 Suns co-owner Jean Ditslear.

Over time, the Lewises received requests for trolley use in weddings and other events. Each one took the trolley off its regular route and undermined the business’ primary focus.

“We couldn’t do it all with just one trolley, and we didn’t want to take away from the loop. People were coming from all over. If it’s not there on a Saturday because it’s at a wedding, they may not want to come back,” David Lewis said.

The Lewises found a solution — they added two more trolleys to the mix. The newer trolleys are larger and sturdier. They’re used for weddings and special events throughout the Front Range. In 2019, the business was part of 53 weddings, Lewis said. Before the pandemic, one trolley made the trip to Denver with a full group of riders to take part in the St. Patrick’s Day Parade and visit three bars.

Ultimately, the business not only brought greater visibility to Longmont breweries, it brought visitors to the city. Lewis has seen riders from around the world.

“For people that live here, we’re a great activity that they can do with guests who are in from out of town. Beyond that, people found us through web searches and thought that riding a trolley would be a fun thing to do,” he said. “The only other trolley on the Front Range is in Estes Park. They find us online and come because it sounds fun.” 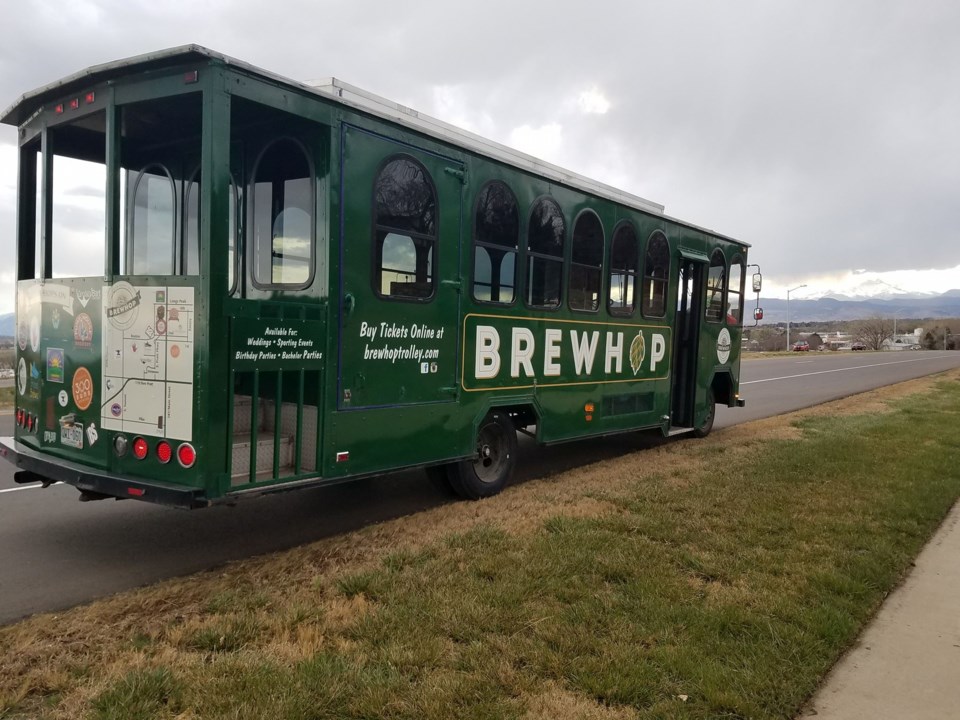 By March, Brew Hop Trolley had gained a lot of momentum, but pandemic-related impacts halted both tourism and taproom operations. The Lewises’ business felt the impact but is poised to recover as things return to normal.

Until taproom occupancy restrictions lessen, trolley riders who want to enjoy being taken from brewery to brewery need to reserve a chartered ride. Lewis will then create a specialized itinerary, calling ahead to reserve seating. He said the system works best with 24 people or fewer — about three brewery tables. Trolley staff will prep every party for taproom etiquette in the current environment.

Weddings also are beginning to be rescheduled and Lewis said trolley availability for those events is becoming more limited. He is trying to accommodate groups that had to put off their events last year and that is taking up space that would normally be available for couples who are just starting to plan their big day.

As business is showing early signs of returning to normal, Lewis, and the breweries on his route, are ready. As Ditslear said, “They’re a locally and family owned business that cares about Longmont. We can’t wait until the regular tour gets started again.”

The BrewHop Trolley all lit up for the holidays in December 2020. By Dave Lewis / Courtesy photo